The partnership between Evelyn Lauder, her doctor, and tens of thousands of donors

In 1988, Evelyn Lauder, the vivacious wife of cosmetics titan and major philanthropist Leonard Lauder, was diagnosed with breast cancer. She decided to begin treatment with a well-regarded oncologist who offered conventional measures. Leonard knew that as a survivor of the Holocaust and the London Blitz, Evelyn’s every instinct raged against defeat, but fear had closed her off to more promising but riskier options. He felt that he must intervene.

After casting a wide net, Leonard went to see Larry Norton, a breast oncologist then at Mt. Sinai Hospital in New York. Young and iconoclastic, Norton was determined to find new ways of treating this disease that took the lives of more than 46,000 women every year. During the 1970s and ’80s, he and colleague Richard Simon at the National Cancer Institute had applied an old mathematic model of population growth to breast-tumor biology. They theorized that small tumors, like populations, would multiply slowly until they reached a critical mass, when the growth-rate would soar. That called for striking early.

By subjecting small tumors to intense chemotherapy and reducing the time between treatments, Norton and Simon theorized that they could stay on top of cancers before they proliferated beyond control. At the time, their theory was heresy within the medical establishment. Later, their treatment would be recognized in the Journal of the National Cancer Institute as “the greatest clinical trial innovation in 20 years.”

Though Norton was a bit of a renegade when Lauder approached him, Leonard felt certain he had the right man—a creative and daring oncologist. Now he had to convince Evelyn to put her life in his hands.

Their conversation lasted all afternoon, beyond the dinner hour, and well into the night. At two in the morning Evelyn finally said yes.

Her hesitance quickly became moot. “We had a deep and immediate friendship,” says Norton. Under his care, Evelyn’s cancer went into  remission. She would live for 23 more years before passing away from a different type of cancer. But her and Norton’s fight did not stop with her own disease. “Our friendship would later evolve into a kind of marriage,” he says, devoted to scientific research that would change the lives of countless cancer patients around the world.

The Breast Cancer Research Foundation—founded by Evelyn Lauder and Larry Norton in 1993—is currently the largest private funder of breast-cancer research in the world. In the past 25 years, BCRF has raised more than $700 million, and in 2017 alone, it disbursed $67 million in grants ($35 million from 31,315 individual donors, and $32 million from corporations) to over 300 researchers in 14 countries. The number of corporate partnerships rose from 6 in 1994 to 150 today.

On a visit to Dr. Norton’s office, the person who catapults through the door is short, bespectacled, white-coated, frenetic, and completely mesmerizing. I have caught him in emergency mode, he explains. He is juggling a terminally ill patient, routine necessities, and my visit. “I think of myself as the March Hare,” he says. “I like working underground amid the dark chaos of illness, helping my patients find their way out.” As the son of Holocaust survivors who had sacrificed everything for the future of their children, he is a deeply religious man whose life of service is a byproduct of his gratitude.

At the time that he met Evelyn in the 1980s, “our knowledge was primitive,” he says. The genetic and biologic processes of breast disease were not understood. In the absence of precision technology, physicians often diagnosed patients only at later stages when metastasis was rampant.

While there were two private nonprofits focused on breast cancer, neither of them primarily funded research. Susan G. Komen for the Cure, founded in 1982 as the Susan G. Komen Breast Cancer Foundation, funded some research but its emphasis was educating the public and establishing clinics where women could receive exams and testing. The North American Breast Cancer Organization, now defunct, was a coalition of small organizations with a similar mission.

The rapport between Larry Norton and Evelyn Lauder soon led to major individual and corporate donations aimed at a different goal: hastening the progress from lab to clinic of new ideas in breast-cancer treatment. Norton had scientific and medical expertise, and a network of colleagues in the field. Lauder had access to the managerial and creative talent at Estée Lauder Companies, plus links to leaders in the arts, media, various industries, and government. She also had the financial means and the social connections to get a major new foundation off the ground. 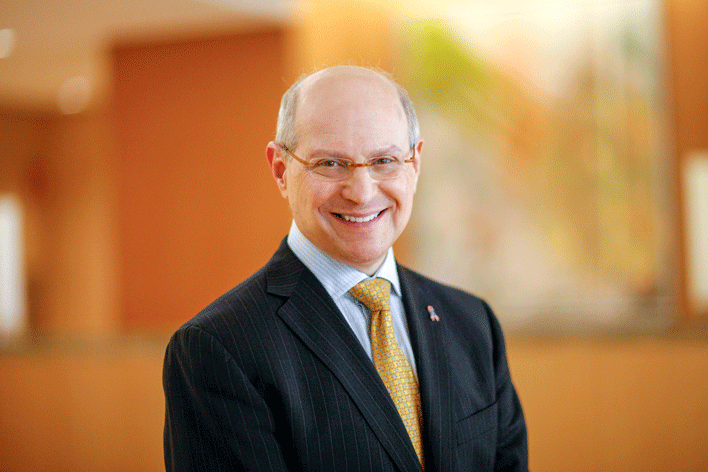 Dr. Larry Norton was not looking for “celebrity gold dust” to help his research efforts, but rather a partner who could build organizations. He found that and more in Lauder.

“I was not a physician looking for celebrity gold dust,” Norton explains. What he most needed was “an experienced marketing entrepreneur who could guide me through the process of building an organization and fundraising. And Evelyn was all that and more. Her interpersonal and leadership skills were first-rate, and she loved the science, immersing herself in medical journals. She understood a lot. And what she didn’t understand, I taught her.”

Evelyn Lauder was accustomed to hard battles. She was born in Vienna to Mimi and Ernest Hausner in 1936. She and her parents fled Hitler, escaping to Belgium, then England, and finally New York City in 1940. Successful merchants, the Hausners eventually opened five clothing stores. Both Evelyn’s survival instincts and her entrepreneurial skills were a legacy of her parents.

In 1958, Evelyn earned her B.A. at Hunter College, and began teaching in public schools. Her life took a turn that year, however, when she met Leonard Lauder on a blind date. The two soon married, and Evelyn directed her energy toward expanding the Lauder family’s six-product cosmetic line. She and Leonard turned the company into a global force, and Evelyn inherited her mother-in-law’s cosmetic throne.

After Evelyn perceived the need for a breast-cancer research nonprofit, she told her friend and soon-to-be-associate, Myra Biblowit, “I need another job like a hole in the head. But if I can do it, it would be a sin if I didn’t.”

Pooling their skills and connections, Norton began with a breast center at Memorial Sloan Kettering Cancer Center in New York City. They decided they couldn’t build the center on Lauder money alone, so while Norton formed the medical team Evelyn began an awareness campaign, with the Estée Lauder staff behind her.

As a seasoned marketer, she knew their effort needed a logo. She and an editor friend came up with the idea of a pink ribbon, patterned on the successful red-ribbon symbol of the AIDS campaign. As Evelyn fundraised she shared information about the newest thinking in prevention, diagnosis, and treatment of breast cancer. Before long she and her staff raised $18 million—$5 million more than they needed for the MSK center, which opened in 1992 as the largest breast-cancer diagnostic center in the country.

With the facility in place, Norton implemented his ingenious idea of bypassing medical institutions and government agencies by granting seed money directly to physicians and researchers whose experiments were too risky for government support. Instead of requiring a lengthy, complicated grant request, the Breast Cancer Research Foundation devised a 15-page application. While Lauder continued her fundraising and awareness campaign, Norton appointed a medical-review committee that set high standards for grantee accountability and minimized bureaucracy. In its first year, the foundation chose eight research grantees to receive $20,000. Today researchers supported by BRCF receive grants of $250,000 each. This money allows innovative experimentation, which often opens the door to subsequent funding by other foundations or by government.

If Charity Navigator had been around in the 1990s, it would have given BCRF a black mark for the huge amount it spent on overhead—one third of its total revenue of $643,000 in 1994. But it was a valuable early investment in building up the enormous donor base. These efforts paid off, and today, communication and marketing of comparative scope and reach permit the organization to allocate 89 percent of its revenue to research.

BCRF investigators have been involved in many major breakthroughs in breast disease. It underwrites a broad range of research projects in prevention, screening, diagnosis, treatment, and long-term survivorship, including:

Aggressive, innovative research has made 90 percent of breast cancers controllable. The remaining 10 percent that still defy treatment are the primary focus of BCRF today.

“In an economy in which scientific progress cannot depend on government funding, and tens of billions of dollars are being transferred from Baby Boomers to a new generation, we must harness the power of philanthropy,” says Norton. “And discovery alone is not enough. We need to begin the multimillion-dollar-process of converting our laboratory findings into FDA-approved drugs. That takes people who understand the potential of scientific research and are willing to invest in us. We need more Evelyn Lauders.”

When Evelyn passed away in 2011, the Empire State Building was illuminated in pink light to honor her pioneering philanthropy. When asked what spurred her accomplishments, her husband Leonard Lauder told me, “I think it was the Holocaust. She always wondered why she had survived, and others hadn’t. She felt she had been saved for a reason. She wanted to leave something big behind.”

Susan Hertog is the author of Anne Morrow Lindbergh: Her Life and Dangerous Ambition: Rebecca West and Dorothy Thompson. For an extended version of this story, click here.