A Lot to Learn

Class Warfare: Inside the Fight to Fix America’s Schools
by Steven Brill
Simon and Schuster, 2011
496 pp., $28

Steven Brill’s Class Warfare is an immensely readable take on a slice of the “school reform” movement and an intriguing look at some key individuals in that effort. But, as is shown by its treatment of philanthropy, the book is perhaps more revealing for what its author omits—and how its blinkered view can mislead readers on big questions. 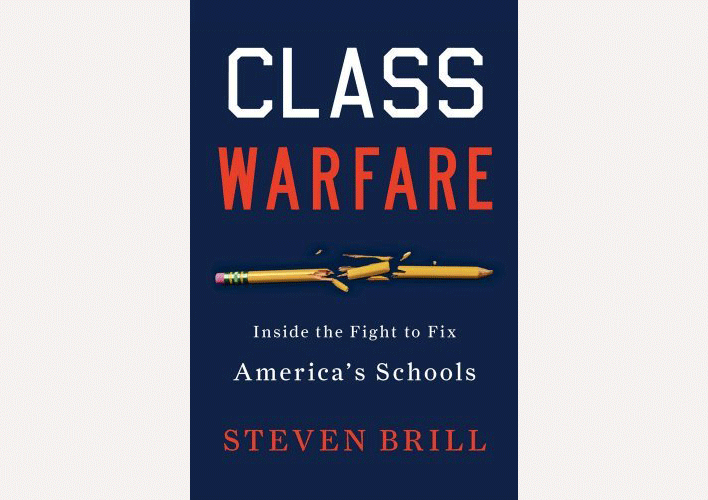 First, let’s be clear: Class Warfare has a lot going for it. It’s an engaging read and a terrific way to get up to speed on some of the key developments and personalities of Obama-era school reform. Brill’s closely observed tale is studded with telling details. Writing for the New Yorker, Brill famously, and devastatingly, described life in the New York City school system’s Temporary Reassignment Centers. (These are the “rubber rooms,” where public schoolteachers collect full pay for months, often years, while they are in the long process of being fired.) No surprise, then, that the book has first-rate reporting on the politics of school reform in New York City and State, especially on the launch of Democrats for Education Reform (DFER), a political action committee that works with the Democratic Party on educational reform issues. There are vivid accounts of the trials and frustrations of the Obama administration’s Race to the Top program, enhanced by Brill’s deep access to key Department of Education officials.

Brill throws himself into the subject; his book is rife with the passion (and, alas, bathos) of a high school sophomore’s diary. There’s a bit of puppy love when it comes to reformers like Schnur and Tilson. There’s also spewing fury reserved for the villainous teachers’ unions—describing how union influence explains why school boards and superintendents have signed off on troubling contract provisions and why principals and superintendents cravenly evaluate 99 percent of teachers as satisfactory. Curiously, Brill reverses course in his conclusion—attacking Republican governors in Ohio, Indiana, and Wisconsin for challenging union influence by battling public sector collective bargaining. In a bizarre turn, Brill the fire-breathing union basher morphs into a soft-spoken peacemaker who declares the unions invaluable partners in reform.

But Class Warfare is underwhelming. To condense the effort to reform 100,000 schools into a tale that fits neatly into a popular book, Brill adopts a strategy of miniaturization; he squeezes the world of school reform into a tiny cast of characters whose efforts don’t get seriously underway until Barack Obama decides to run for President. Brill casts the entire “school reform” enterprise as the handiwork of an interlocking network of perhaps two or three dozen people.

To hold the story together, Brill suggests that the great truths of educational reform were only just discovered during the run-up to the Obama presidency. He tells of a wide-eyed Whitney Tilson, shocked to learn in 2004 that Democratic politicians were opposing charter schools. Brill implies that it wasn’t until a 2007 Brookings paper that anyone had ever argued that the barriers posed by teacher licensure ought to be lowered, or that anyone had produced evidence with which to make the case that new teachers ought to be evaluated more rigorously. In his concluding chapter, Brill suggests that we are living in a watershed moment, because it’s the first time that anyone has sought to challenge the teachers’ unions.

This makes for a pretty good story—a nice, tight narrative with bad guys and good guys, where the good guys just happen to be really nice and interesting people to whom the author has access. Unfortunately, it misrepresents the real history of school reform. In Brill’s telling, the Obama administration and DFER are fearless pioneers, rather than simply the most recent travelers in a long, frustrating journey. The overall effect is to make it seem like the problem with school reform had been that, for years, nobody knew what to do. Now, he implies, we do.

Because these recent initiatives are presented as unprecedented, Brill’s readers can more or less ignore three decades of “reform” disappointments. Utterly absent in Class Warfare is even a nod toward two decades of fights over school vouchers, teacher licensure, or No Child Left Behind implementation; the hard-won battles of private funders to support charter schools; and the struggles of school choice organizations that have long battled the teachers’ unions. The effect is to leave readers without necessary context and perspective. They will not understand what challenges lurk on the horizon, and won’t appreciate the reasons to fear why exciting, new efforts will fail.

The book thrills at the prospect that Democrats are championing education reform, and its lack of interest in conservative reformers leaves an unsavory, politicized aftertaste. While DFER co-founder Whitney Tilson shows up more than three dozen times in the index, and his colleague Boykin Curry another 20 times, key contemporary Republican figures are almost totally absent. One is hard pressed to find any mention of people like former Secretary of Education Margaret Spellings, Thomas B. Fordham Institute president Chester E. Finn Jr., Indiana Superintendent of Public Instruction Tony Bennett, Indiana Governor Mitch Daniels, or Senator Lamar Alexander of Tennessee. This is school reform as seen from one corner of the political universe. At a certain point, it occurred to me that the volume could have been helpfully subtitled “A Lively Take on Democrats for Education Reform, Race to the Top, and President Obama: 2007–2011.”

Brill likewise reduces education reform philanthropy to the Gates Foundation and the Eli and Edythe Broad Foundation. Those familiar with education philanthropy know better. Since the 1980s, the John M. Olin Foundation and the Lynde and Harry Bradley Foundation have made policy and research central to school reform efforts. Starting in the 1990s, their involvement in the creation of the Milwaukee Parental Choice Program provided a textbook lesson in how foundations can leverage limited dollars into an outsized impact on public policy. In supporting Howard Fuller’s path-breaking leadership and advocacy, Paul Peterson’s seminal voucher research, and the political advocacy essential to successes in Milwaukee and elsewhere, Olin and Bradley were decades ahead of their time, helping to set the table  for today’s debates about school choice.

The Walton Family Foundation, the Pisces Foundation, and the NewSchools Venture Fund played similarly critical roles, in the late 1990s and early 2000s, in supporting the growth of high-performing charter school networks. Donors, including Ross Perot and the Carnegie Corporation, played similarly pivotal roles in supporting the launch of Teach For America in the early 1990s. All of these efforts, and the lessons learned from them, are more or less ignored by Brill. His focus is on what’s happening today in New York City, especially among the network of DFER activists. The point here is not to diminish the leadership shown by Gates, DFER, and others, but to avoid the naïve inclination to imagine that today’s reformers are the very first to brave these waters.

Still, school reformers have indeed won major battles over the past decade, and the center of gravity has moved in important ways. But these successes have come with a tendency to oversell the evidence, skimp on issues of design and implementation, and embrace simplistic proposals. Page after page describing the heroism of reformers and villainy of the “anti-reform” cadres isn’t likely to encourage reflection or smart course corrections on the part of would-be reformers. There is no insight into the shortcomings of the protagonists, nor any acknowledgment that they may sometimes be championing ill-conceived reforms when it comes to teacher evaluation, merit pay, or the role of the federal government. If Brill were less eager to lionize, if he were more interested in what can go wrong, his book would have been much more valuable.

Consider performance pay. Brill repeatedly endorses performance pay while showing little interest in what the policy actually entails. He casually references preliminary Gates Foundation research from its Measures of Effective Teaching project and insists, with finality, that value-added scores are highly stable and predictive, and that they consistently correlate with teacher observations and student feedback. A fair-minded reader would conclude that we know what works and we know what we need to do—now it’s only a matter of doing it. The problem is that this is a dramatic overstatement of how much we know, or how refined these systems are.

For instance, in 2010, a federally funded three-year randomized evaluation of a Tennessee merit-pay experiment found that bonuses tied to test scores didn’t lead to higher performance in middle-school math. “Study Casts Cold Water on Bonus Pay,” read Education Week’s headline, and the news was widely interpreted as a body blow for those  attempting to link teacher compensation to classroom performance. Yet the most compelling rationale for merit pay is not any short-term bump in test scores but rather the potential for making the profession more attractive to talented candidates, more amenable to specialization, more rewarding for accomplished professionals, and a more appropriate fit for the 21st-century labor market. Brill seems uninterested in such complexities, repeatedly embracing the value of test-driven evaluation and unquestioningly championing efforts that may well lead would-be reformers to adopt half-baked reforms.

Cheerleading like this can encourage hubris, overreach, and the enthusiastic search for silver bullets—precisely the same failings that today’s reformers are seeking to remedy. In the end, Brill’s effort is interesting but flawed. He allows enthusiasm to stand in for analysis and proves unduly susceptible to faddish trends and charming personalities. He seems to imagine that reforming 100,000 schools serving 50 million students will be a lot easier than it ever could be. More importantly, however, what is true for Brill is true for everyone who wants to help improve the nation’s schools. We must be tough-minded, determined, and patient. Perhaps most of all, we must realize that all of us have a lot to learn.