A Walk Through Some Nation-changing Churches

Giving thanks for Boston's charitable houses of worship

I’ve just spent time in Boston, visiting some of America’s earliest houses of worship while researching the many contributions made to charity and civil society by our nation’s churchfolk.

I started at the Old North Church. That was Paul Revere’s congregation, and its steeple was where the church sexton hung two lanterns one evening in 1775 to warn patriots that British troops were heading across the Charles River to seize American leaders, arms, and ammunition hidden north and west of the city. Revere and other riders spread the warning as far as New Hampshire, so when the 700 redcoats descended on Lexington, instead of finding a sleeping village they ran up against an armed militia. By the end of the day, only 400 British fighters were left. 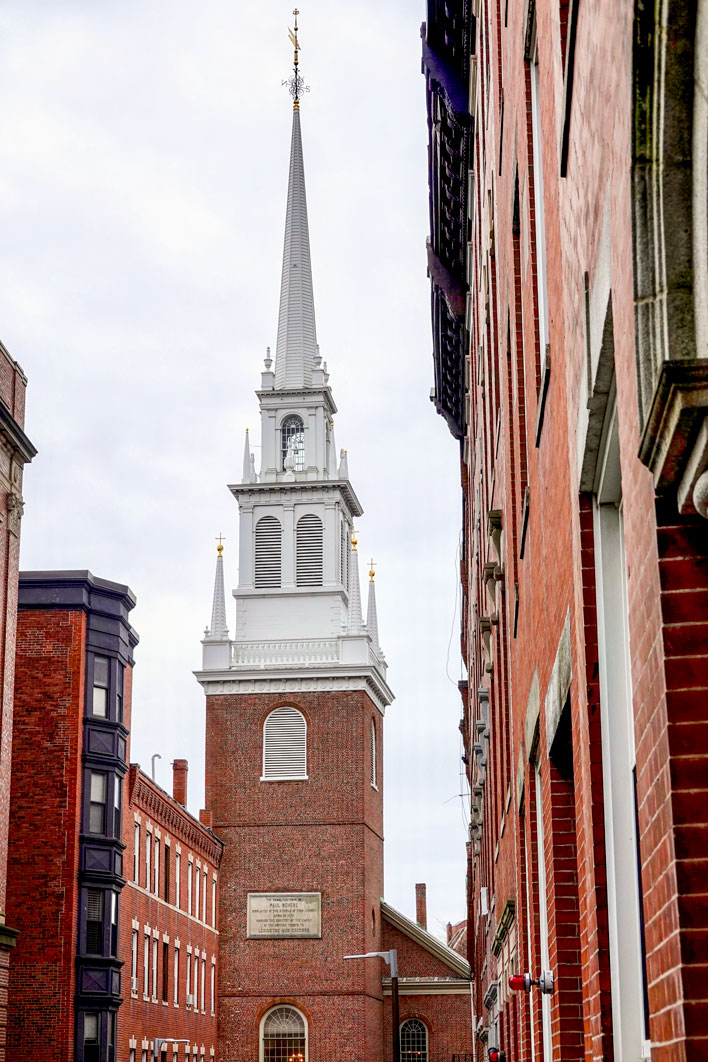 Old North Church, home to Paul Revere and countless other doers of good.

Old North Church continues today as a very active Episcopal congregation (also known as Christ Church), meeting right in their original sanctuary built in 1723. One of the most unusual features of their worship hall is the set of four hand-carved and brightly painted angels that sit on pedestals arrayed across the church balcony. Fashioned in Belgium in the early 1600s, these statues were headed for a church in Quebec when the French ship carrying them was seized in battle by a ship captain who was a member at Old North. He donated the angels to his home parish, and the church record book shows that the vestrymen, quote, “voted that…ye…four cherubims…taken by ye said vessel…be placed on ye top of the organ.” And there the gifted goods sit to this day, quite beautifully.

Just behind them is the oldest American-built pipe organ, another present from congregation members. It still plays at every service. And up in the church’s steeple are a set of tuned bells cast in England and installed at Old North in 1744 after an energetic fundraising campaign that collected private donations ranging from a few pence to many pounds.

The smallest bell is inscribed, “This peal of eight bells is the gift of a number of generous persons to Christ Church, in Boston, year of our lord 1744.” Bell number three carries the names of four of the major givers. And the side of bell number two reads poetically: “Since generosity has opened our mouths, our tongues shall ring aloud its praise.”

One of the first official ringers of these donated bells was the 15-year-old Paul Revere. They’re now the oldest working chimes in America.

After visiting Old North Church I walked a dozen blocks or so to King’s Chapel, which had completely different origins. The British Royal Governor, rather than donors, founded it in 1686 to be the first Anglican church in New England. At that point New England was full of Puritans who had dragged their families across a stormy ocean to get away from the haughty demands of the Anglican church, so not one Bostonian would sell the governor land to build his chapel on. He was thus forced to erect it on the public burying ground, which belonged to the king.

When the time came to replace that first church, the tight plot required that the new stone structure be built literally around the existing wooden church. Only when the larger building was complete was the wooden frame disassembled, and its pieces passed through the stone windows. Not wanting to waste the original building, the British shipped all the wooden parts up to Nova Scotia, where they were reassembled into an Anglican church there.

Though it was now lovely in stone and pillars, the stubborn New Englanders still refused to embrace this house of worship that was pledged to the crown. So King’s Chapel sat vacant during the American Revolution. Bostonians wouldn’t even pay lip service—they referred to it simply as the “Stone Chapel.” Today, it operates as a Unitarian church.

Just a stone’s throw away sits another historic religious organization. The Park Street Church was formed in 1804 by a group of evangelicals seeking more orthodox Christian services. It hosted one of America’s first Sunday Schools. It became a leader in funding Christian foreign missions. The congregation dispatched missionaries to many overseas locations, and continues to support schooling, economic aid, health services, and Christian teaching in poor lands.

The Park Street Church also became a hub for religious arts. Many beloved hymns were debuted here. Our country’s second-oldest musical organization, the Handel and Haydn Society, was formed at the church. And to make their love of God tangible, parishioners eventually created a landmark for fellow Bostonians by building a steeple that soars 20 stories high.

In the mid-twentieth century the Park Street Church took an important part in the rise of the modern evangelical movement. It joined in Billy Graham’s crusades, helped create the National Association of Evangelicals, and contributed to the formation of the Fuller and Gordon-Conwell seminaries. Its members started the first prison ministry in the U.S.

Today, the thriving congregation of 2,000 supports a Christian school for city children, a crisis pregnancy center, homeless ministries, an animal-rescue operation, language training for immigrants, and other charitable outreach.

Next, I crossed the Boston Common and Public Garden to visit another impressive religious institution. First Baptist Church occupies a magnificent stone cathedral created by the great architect Henry Hobson Richardson and great artist Frederic Bartholdi. This was the home congregation of Thomas Hollis, a successful colonial merchant who was so grateful to his adopted land for his freedom to worship as a dissenting Baptist that he endowed a professor of divinity position at Harvard. Then he endowed a chair in mathematics, and many other posts, ultimately making huge donations to our nation’s first college. Hollis thus invented the philanthropically endowed professorship, a centerpiece of turning America’s universities into the best in the world.

My tour of great houses of worship in Boston ended just down the street, where two more massive churches sit diagonal from each other. Trinity Church is an Episcopal congregation in another jaw-dropping Romanesque building designed by Richardson. And Old South Church is a massive stone pile with an equally massive history. Its congregation first gathered in 1669, and later played a major role in the American Revolution, including launching the Boston Tea Party. Early in the Civil War, more than a thousand men enlisted in the Union Army at Old South in just one day. And dozens of charities like the YMCA and the City Mission Society have sprung from congregational gifts and voluntary efforts.

Old South Church is also the traditional finish line of that other great charitable event, the Boston Marathon. So it was fitting that my stroll through some of America’s culture-changing sacred spaces ended there as well.