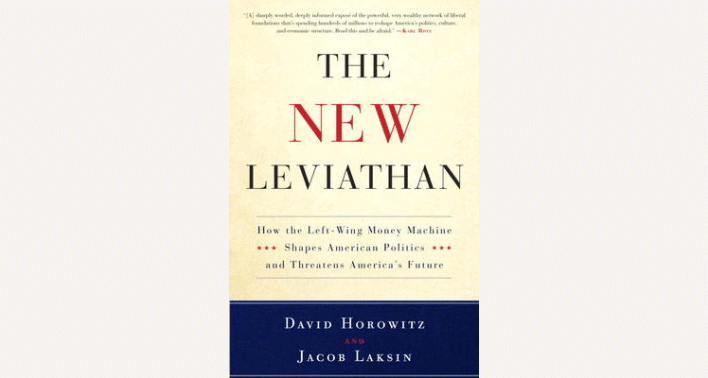 “Read this and be afraid,” advises Karl Rove in his blurb on the cover of The New Leviathan, a book just published by prominent conservative writer David Horowitz and Jacob Laksin. This new leviathan, the authors note, is a sprawling, intimidating “network of billion-dollar tax-exempt foundations and advocacy think tanks that work in concert with government unions and grassroots radical groups to make up the organizational core of the political left.”

For the thoughtful conservative philanthropist, this volume is indeed a must-read, providing a sense of the challenges facing anyone on the right who wishes to influence public policy. As Horowitz and Laksin point out, the field is in fact dominated by a massive collection of liberal foundations, deploying their resources to cultivate skepticism about the justice of America’s economic and political institutions, aiming to bring ever broader swaths of our public life under government supervision and control.

David Horowitz, now president of the David Horowitz Freedom Center in Los Angeles, has long specialized in detailed roadmaps of the left’s serpentine organizational networks, based on his early immersion therein as a Red-diaper baby and, later, as a leading intellectual for the New Left during the 1960s. After renouncing radicalism, Horowitz’s mission has been to help the rest of us see through the appealingly idealistic facades sported by so many foundations and nonprofits on the left, down to the collectivist impulse at their core. The danger highlighted in Horowitz’s new volume is the sheer magnitude of this organizational colossus, which dwarfs the resources conservatives are able to marshal.

In the field of immigration policy, for instance, Horowitz and Laksin note that some 117 progressive groups with annual revenue of over $306 million are working to dismantle strong traditional standards for immigration and citizenship, while only nine groups bringing in $15 million per year defend those standards, leaving left-wing organizations with 22 times the annual revenue of those on the right.

On environmental questions, the ideological imbalance is even more pronounced. In their eye-opening appendices—these alone are worth the price of the book—the authors list no fewer than 552 groups promoting greater government control over the environment with annual revenue of $3.56 billion, compared to a mere 32 groups emphasizing private property and free-market solutions to environmental problems bringing in $96 million per year—an imbalance of over 37 to 1 in favor of the left. In both of these areas, the left’s resource advantage is compounded many times over when government funding is added to the mix, which flows disproportionately to progressive groups even under conservative presidential administrations.

Adding up total philanthropic resources available on either side of the ideological spectrum produces equally startling results. (Please see figures 1 and 2 below.) Horowitz and Laksin count 122 major foundations on the left, holding assets of over $104 billion, compared to 86 conservative foundations, with assets of just over $10 billion—leaving the left a ten-to-one advantage. (After 20 years in philanthropy, my startled response to this second list was: Where have all those conservative foundations been hiding?)

Insofar as these figures are accurate, it’s obviously absurd to argue, as have many pundits over the past two decades, that the political success of American conservatism rests entirely on their massive financial advantage over the left. And The New Leviathan’s figures are reasonably accurate, though in some cases—for instance, listing the entire assets of the Bill and Melinda Gates Foundation on the progressive side of the ledger—the authors don’t do justice to grants that might be considered conservative, like Gates’ support for innovative educational reforms, or grants that are largely non-ideological, like its support for vaccines in developing countries.

But just as many observers tend to inflate vastly the influence of conservative philanthropy in public policy, so Horowitz and Laksin tend to do the same for liberal grantmaking. For instance, it is probably true, as they suggest, that the drive for greater government control over health care was sustained almost single-handedly, through thick and thin, by substantial, long-term support from liberal foundations like Ford, Robert Wood Johnson, Packard, and Atlantic Philanthropies.

But in other areas—national security, for instance—it’s problematic to suggest that America’s retreat from an assertive foreign policy is a “testament to the power and influence of the [left-wing] Peace and Security Funders Group.” After all, as the authors themselves note, that retreat is backed by “moderate Republicans, neo-isolationists, libertarians, and the center-left of the Democratic party,” with reduction in nuclear arms supported even by the George W. Bush administration. A general public weariness with overseas military ventures, building on a traditional American suspicion of them, more readily explains the retreat than lavish financial backing from foundations. Likewise, the rise of the conservative movement beginning in the late 1960s surely had less to do with surreptitious bankrolling by wealthy conservatives than with the manifest costliness and ineffectiveness of the Great Society, combined with widespread public alarm over the era’s political unrest.

These unnecessary exaggerations point to one of the key disciplines essential to good grantmaking in the public policy arena—namely, the need to remain sober and realistic about the effect one’s giving is likely to have, when outcomes are shaped primarily by substantial and often unanticipated political and economic developments far beyond the reach of philanthropy.

If, as Karl Rove urges, the first reaction to progressive philanthropic hegemony might appropriately be fear, is there nonetheless nothing to be done about it? After all, as Horowitz and Laksin point out, the massive imbalance in resources has come about in spite of the fact that most of today’s progressive, anti-market foundations were established by entrepreneurs who benefitted immensely from, and were enthusiastic supporters of, that very same free-market system. How can conservatives block this ideological hijacking?

It’s essential to understand that philanthropic shifts to the left typically occur not explicitly, with an endorsement of progressivism, but rather implicitly, with the embrace of professionalism. Professional experts, especially in social policy, are trained to believe that public problems are deeply embedded in massive and complex social structures that they alone can understand, and which can be reformed only by equally massive, expert-designed and -driven programs. So costly are these programs—and their handsomely paid professional managers—that scarce philanthropic dollars shouldn’t be wasted in direct support, but rather devoted to “advocacy,” which invariably means pressing for ever-larger subsidies from public sources.

Newly minted philanthropists, fresh from success in the marketplace, are typically not enthusiasts for big government. But they do wish their giving to be sophisticated, cutting-edge, and professional. So they put their giving into the hands of experts, who in turn—masked by philanthropic buzzwords like “leveraging resources” and “collaborative synergies”—quietly steer the new grant dollars to the cause of expanding government. Thus does conservative money ineluctably slip into the progressive column.

More emphatic expressions of donor intent, along with board members who understand and support it, might impede this drift. But it might be wise as well to rethink the bias toward professionalism that gives rise to it in the first place, and re-orient our giving accordingly.

As Alexis de Tocqueville pointed out, long before the age of expertise, the American people were willing and eager to come up with their own ways to solve their own problems, reflecting deep-seated moral and religious convictions. Modern philanthropy’s preference for experts steeped in objective, value-neutral sciences explicitly rejected this tradition of self-government by everyday citizens, blinded as they are by benighted sectarian myths.

Conservative philanthropy would do well to challenge the “we know better” attitudes of the experts, and support instead the home-grown solutions that citizens themselves design for their own problems. At the same time, conservative dollars are needed to reconstruct the intellectual defense of civil society and its indispensable role in cultivating the civic engagement at the heart of limited, constitutional democracy. As we enter a time when philanthropic advocacy for more government spending will collide with severely constricted budget realities, Americans are more likely than ever to heed the summons to reconstruct their “mediating structures”—their families, neighborhoods, religious institutions, and voluntary associations—within which citizens can begin to reclaim from over-priced professionals the management of their own affairs.

Horowitz and Laksin conclude The New Leviathan by noting that progressives pose as “noble advocates of the underdog, ‘speaking truth to power,’ selflessly standing up for the economically disadvantaged and the politically disenfranchised,” when in truth they “have operated as a moneyed elite, deploying the war chests of billionaires . . . to increase their power and expand the role of the state with negative consequences for working Americans and the poor.”

This suggests that the power of progressive philanthropy may lie less in its swollen bank accounts than in its morally compelling narrative: a David-vs.-Goliath story in which the left stands up for the underdog David. Americans always cheer for David even—or especially—when Goliath is vastly wealthier and more powerful.

Conservatives can capture this narrative for themselves and seize the moral high ground from the left by proving that the real Goliath is in fact the progressive “new leviathan.” That project is well launched by this new book. But conservative funders must also themselves embrace the cause of David by supporting the enterprising, imaginative deeds of self-government that spring up in neighborhoods across America—even the most disadvantaged and disenfranchised—often in defiance of Goliath’s suffocating statist grasp.

Contributing editor William A. Schambra  is director of the Hudson Institute’s Bradley Center for Philanthropy and Civic Renewal.