This January, India celebrated its first year without polio. The country that in 2010 had more than half the world’s reported total cases—that World Health Organization (WHO) director Margaret Chan described as having the “most tenacious reservoir” of the paralyzing disease—was declared free of endemic polio. Bill Gates, who has made fighting polio his foundation’s top priority since 2011, lauded the Indian authorities and many other groups and individuals whose collaborative efforts made the achievement possible: “Polio can be stopped when countries combine the right elements—political will, quality immunization campaigns, and an entire nation’s determination. We must build on this moment and ensure . . . that no child ever suffers from this crippling disease again.” Even in the face of extreme difficulty, he added, “India’s story illustrates the possibility of tremendous progress.”

India’s story is just the latest (and, one hopes, close to final) chapter of a greater saga stretching back through the 20th century, involving private and public organizations, determined and visionary individuals, and a vast cooperative effort by members of the public. Sixty years ago, polio was the most feared public-health threat in the United States. Summer arrived with the dread of infection hovering over every common activity. In 1952, a record 57,628 cases were reported. It took more lives every year than any other communicable disease. Millions of Americans supported the March of Dimes, established in 1938 by President Franklin D. Roosevelt (himself possibly a polio victim, unbeknownst to the public). As William L. O’Neill details in American High, they donated dimes at shop counters and movie theaters, to door-to-door solicitors, and in letters sent to the White House, all to underwrite polio research and patient care. 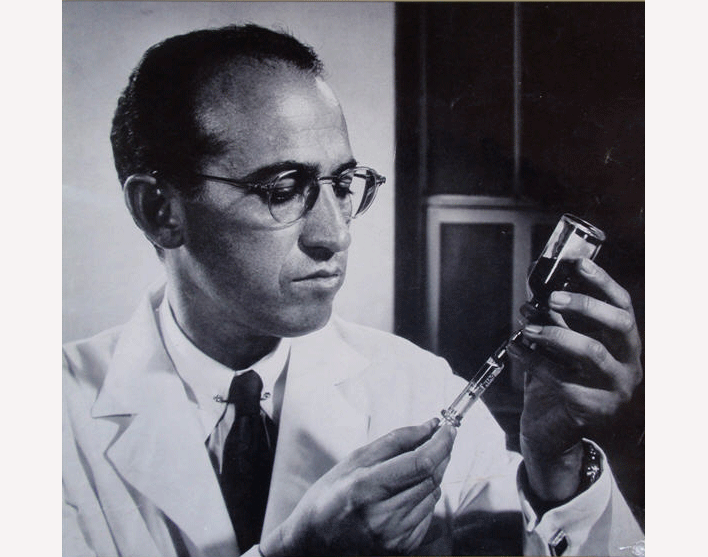 In the early 1950s, Jonas Salk was a virologist working at the University of Pittsburgh with support from the Sarah Scaife Foundation. He started testing a polio vaccine—bravely beginning with himself and his family. When he publicly announced his breakthrough, more than two million children signed up for the trial, which was administered by 20,000 medical personnel, 64,000 school officials, and 220,000 other volunteers. A 1954 Gallup poll showed that more Americans were following the polio field trial than could recall the full name of the president. To much jubilation, the vaccine was declared safe for the public in 1955, and by 1962 the American incidence of polio had tumbled to 910 cases.

Elsewhere in the world, however, polio raged on for decades more. In 1988 there were an estimated 350,000 cases globally. That year, spurred on by Rotary International’s 1985 pledge of $120 million to fight the disease, the Global Polio Eradication Initiative was launched, bringing Rotary together with the WHO, UNICEF, and the U.S. Centers for Disease Control and Prevention. They intended to do with polio what had been done with smallpox in the 1970s: wipe it off the map.

The smallpox vaccine was widely used in the Western hemisphere since the 19th century, dating back to Edward Jenner’s discovery of the immunological benefits of cowpox exposure in 1796. Yet as of 1967, two million people were still dying of it annually. The challenge of saving everyone from smallpox was daunting but within the realm of possibility, largely because of some key features of the virus. It cannot thrive outside the human body. There are no disease vectors in nature. And no human beings are merely carriers; everyone with smallpox displays the symptoms and is easy to identify. Eradicators decided to pursue a “ring vaccination” strategy to isolate and contain each individual outbreak. In all, the effort took 14 years and $500 million.

The payoff is that nobody is routinely vaccinated against smallpox today because there is no smallpox, except stored in two labs in the United States and Russia. (Vaccines are still available to members of the military and some researchers and government officials, just in case, and a stockpile exists that would protect the American public in the event of a biological attack.) More importantly, thanks to those who devoted themselves to this historic public health mobilization, no one suffers from smallpox anymore. No one.

Although a deadlier threat than polio, smallpox was in fact simpler to vanquish. Polio is a good candidate for eradication because it too is a primarily human-based disease, though it can also occur in other primates. However, it is far more difficult to track: for every paralysis victim, there are 200 or so carriers who show no symptoms. Furthermore, while the smallpox vaccine is administered in a single dose, the polio vaccine must be given several times to be effective (each dose, however, costs at most 30¢). Yet another complication is opposition from some Muslim fundamentalists, who have interfered with immunization programs against polio in Nigeria, Pakistan, and Afghanistan.

These and other challenges make the fight against polio more daunting, but not insurmountable: Within six years of the launch of the Global Polio Eradication Initiative, the Americas were certified free of wild polio virus. By 2002, Europe and the western Pacific region were certified free as well. Of the three strains of the virus, one (type 2) has been abolished everywhere since 1999. By the 50th anniversary of Salk’s vaccine, in 2005, the reported global incidence was less than 1,300 cases.

Since then, however, as Donald G. McNeil Jr. of the New York Times put it, “getting rid of the last 1 percent has been like trying to squeeze Jell-O to death.”  The recent success in India brought the worldwide total to just 620 cases in 2011. Only Nigeria, Afghanistan, and Pakistan still harbor the virus, but as long as it is anywhere it may be reintroduced into regions that had previously gotten rid of it (as has happened recently in Chad, Angola, and the Democratic Republic of the Congo). Numerous social and political barriers to eradication exist in those areas, but the goal is getting closer.

No large effort is without its critics, and the campaign to eliminate polio is no exception. Several prominent individuals have assembled at the finish line to call for the project’s discontinuation. Various high-profile figures, from the editor of the Lancet (Richard Horton) to a leading U.S. bioethicist (Arthur Caplan, himself a polio survivor) to the original director of the smallpox campaign (Donald A. Henderson), have argued that spending large amounts of money on a now-marginal health threat is a misuse of funds when there are so many more common and pressing concerns. 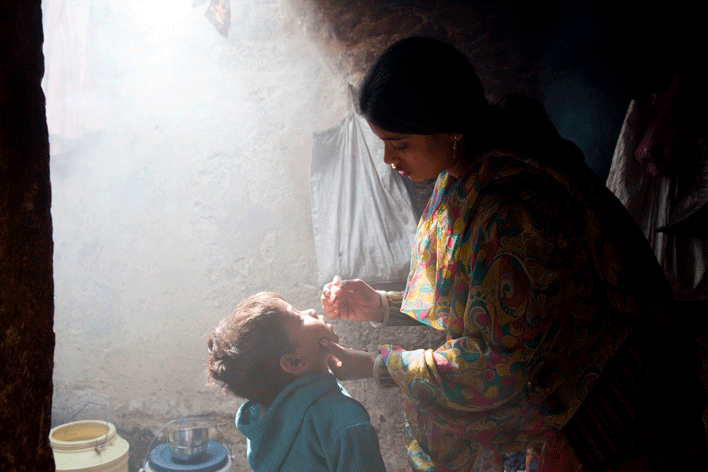 Additionally, a recent paper in the Indian Journal of Medical Ethics by pediatricians Neetu Vashisht and Jacob Puliyel claims that the vaccine is to blame for an unintended consequence: a steep increase in a type of non-polio paralysis. Other epidemiologists say the idea that the vaccine is responsible for the rise in paralysis is not substantiated in any way but circumstantially, and that the apparent slew of new paralysis cases is instead due to increased surveillance and diagnosis.

Proponents of continuing the pursuit of eradication note that once wild polio virus is definitively gone, doctors can switch to safer vaccines for maintenance, and perhaps eventually no vaccines. That, they argue, justifies continuing expenditures of public and private funds.

Rotary International, for one, is unlikely to be fazed by end-game criticism. Its sustained vision over the course of its 27-year-old PolioPlus program shows the importance in philanthropy both in providing resources (Rotary has raised more than $1 billion for the cause thus far) and in shaping public views. In April, Rotary president Kaylan Banerjee met with Afghan President Hamid Karzai to affirm the group’s commitment to continuing support in the region, and to share strategies from India’s success in involving local communities and building trust.

Bill Gates also takes the long view and continues to believe that victory is possible. He worries that, with fear of polio no longer a part of the public consciousness, it may be tempting to take the success so far for granted and let the disease rebound. “If you don’t keep up the pressure on polio,” says Gates, “you’re accepting 100,000 to 200,000 crippled or dead children every year.” In the face of criticism that the goal is overambitious, and the additional complaint that swooping in with polio-directed funds distorts local health priorities, perhaps Gates would find encouragement in the example of his predecessor in medical philanthropy, John D. Rockefeller.

As Ron Chernow explains in his 1998 biography Titan, Rockefeller sought a cause to support that would be entirely unobjectionable, and believed he had found one in medicine. His investments in medical research changed the face of the science as we know it today. For a project with a more direct public effect, though, he turned his attention to the unheard-of notion of eradicating hookworm in the American South.

Hookworm is a parasite that causes extreme anemia, fatigue, and gastrointestinal distress by leaching vital nutrients and minerals from the blood. Charles Wardell Stiles, a government zoologist, had for years been a voice crying in the wilderness about a Southern hookworm epidemic until Rockefeller came along with $1 million (adjusted for inflation, about $24.4 million today).

For his pains, Rockefeller was treated to the lesson that nothing is uncontroversial. Southern leaders protested that the branding of their region as diseased was offensive. Some northerners were reluctant to acknowledge that the characteristic lethargy of many impoverished southerners had physical rather than moral causes. Prominent physician William Osler even declared that there was no hookworm in America. 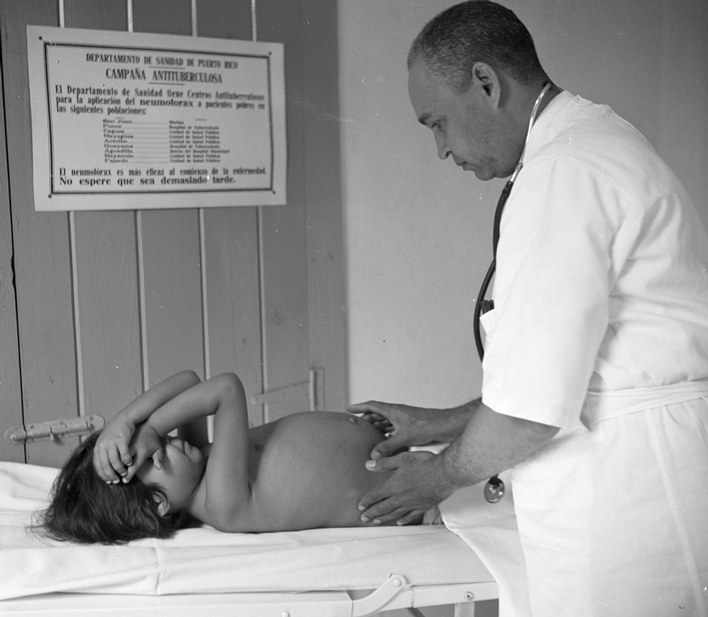 A Puerto Rico physician examines a child for hookworm in 1938.

Consequently, the campaign tactfully downplayed its Yankee origins: a Tennessee gentleman, Wickliffe Rose, was chosen to direct it, and it was run under the auspices of state health boards. “Health trains” resembling carnival expositions were sent around with hookworms wriggling in jars and free handouts of educational materials on sanitation. Treatments (costing the commission only 50¢ apiece) were dispensed at gatherings that often spontaneously turned into revival meetings, with rousing hymns to go along with the miraculous-seeming healings.

In five years, half a million people were cured. Hookworm was not eradicated, but the epidemic was quelled, and any further outbreaks were easily treatable. In the face of this resounding success, enlightened opinion soon forgot how recently it had been opposed to the entire concept. Stiles was awarded the Public Welfare Medal from the National Academy of Sciences, and Harvard president Charles William Eliot called the hookworm commission “the most effective campaign against a widespread disabling disease which medical science and philanthropy have ever combined to conduct.”

This unprecedented effort radically enlarged the scope of possibility for public health campaigns; each one since then—from Rockefeller’s own philanthropic forays into South America and elsewhere to fight yellow fever, to the smallpox and polio crusades of recent history—owes it this debt. Before smallpox was conquered, nobody truly knew it could be done, either. Each new victory paves the way for a future, greater one. There are different roles in the process for government, for mass collective action, and for the individual vision of path-breaking scientists and public-spirited philanthropists. And if polio is a tenacious fighter, so too are its foes.

Caitrin Nicol is managing editor of the New Atlantis and a 2012 Robert Novak Journalism Fellow at the Phillips Foundation.