Fall 2014 – Four Brothers and the Apocalypse

Many people who don’t follow business or politics too closely learned what they know about the Koch brothers from Jane Mayer’s lengthy 2010 New Yorker profile, “Covert Operations: The Billionaire Brothers Who Are Waging a War Against Obama.” The widely circulated article, dripping with hostility and innuendo, lacked balance but had plenty of impact. To the Left, Charles and David Koch became villains of mythic, historical proportions. An entire spectrum of the commentariat, from bloggers to MSNBC pundits to mainstream journalists to the Senate Majority Leader, now routinely blame the Kochs for everything from international crises to bad weather. Indeed, what has been called “Koch Derangement Syndrome” has reached such a pitch that the United Negro College Fund is under pressure to reject a $25 million grant from Koch Industries and the Charles Koch Foundation—not because of any terms of the grant (it would fund 3,000 college scholarships for African-American students), but merely because it is attached to the Koch name. 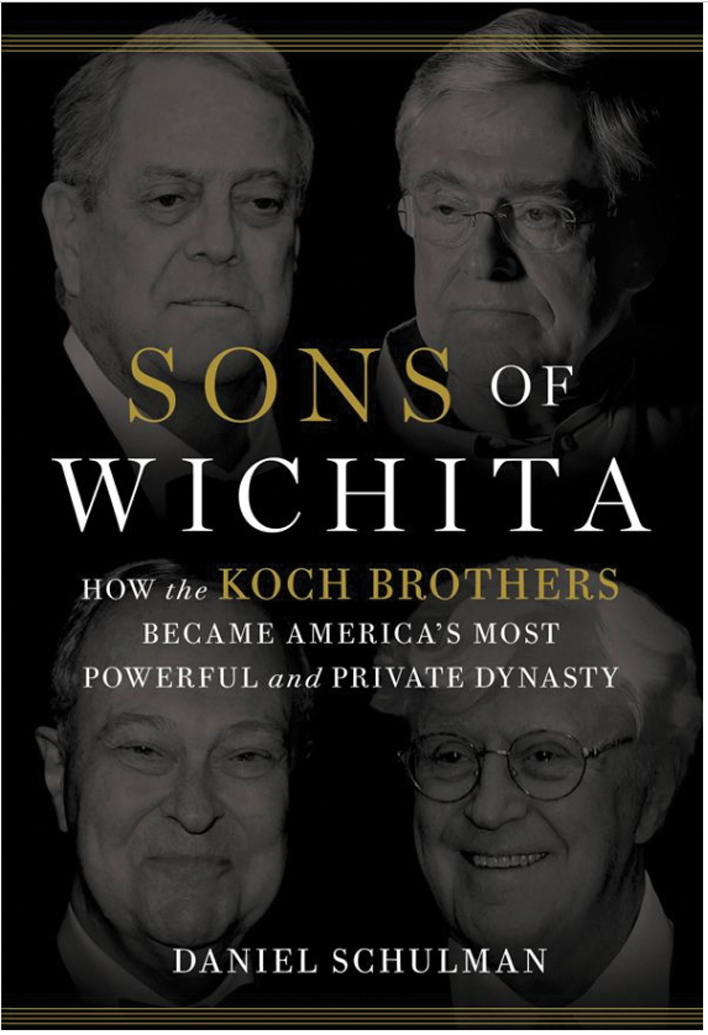 Sons of Wichita, by Daniel Schulman

Into this climate comes Sons of Wichita: How the Koch Brothers Became America’s Most Powerful and Private Dynasty. With the four shadowy faces of the Koch brothers looming from the cover, glowing reviews from the elite media, and a booksleeve bio revealing that in his day job author Daniel Schulman is senior editor at the venerably left-wing Mother Jones, the reader is understandably inclined to think, “Oh, here we go.”

But wait—this book turns out to be a real surprise. Schulman has done a remarkable job of attempting to put aside whatever political biases he may harbor in order to serve his larger goal: To tell the genuinely fascinating tale of the rise of the Koch family, via Koch Industries, and to try to explain the personal and philosophical influences that inform the brothers’ actions and giving.

It is a heckuva story, a quintessentially American one, and Schulman tells it well. Fred Koch, the son of a Dutch immigrant, sought his fortune in hardscrabble Quanah, Texas. An industrious, insightful, and most of all tough man (“He was like John Wayne,” David Koch recalls, “just like John Wayne”), Fred Koch understood that being a good father was not the same thing as being an indulgent father. According to Schulman, “Fred feared that a life of privilege would little by little erode [his sons’] independence, and he worried that they would rely on his successes and never bother to achieve their own. ‘The most glorious feeling,’ Fred often told his sons, ‘is the feeling of accomplishment.’”

Fred Koch must have been quite familiar with that “glorious feeling.” Starting with a mere $300 investment and living out of his office, he built an impressive business empire focused on oil, refining, and ranching. A daring entrepreneur, Fred accepted an invitation by the Soviet Union in the 1920s to help develop its oil “cracking” capacity. Fred was appalled by what he saw in the U.S.S.R., and the experience haunted him for the rest of his life. “I was naïve enough to think in that far away day that I could help the Russian people by what I was doing,” he wrote in a letter to the Washington Post in 1964. “What I saw there convinced me that communism was the most evil force the world has ever seen and I must do everything in my power to fight it.”

Fred Koch fought communism and promoted freedom in three ways: through the success of his own business, through support of anti-communist groups like the John Birch Society and the nascent libertarian movement, and, perhaps of greatest long-term significance, through the education of his sons.

Each of those sons is today a major philanthropist, though as Schulman makes clear they are very different men.

Frederick, the eldest, has always followed his own path. An elegant and private man who was always more interested in art than in business, Frederick gravitated more to his mother, chafing under the expectations and stern discipline of his father. The only one of the four brothers not to pursue engineering at M.I.T., Frederick has quietly amassed an eclectic, sophisticated collection of art and properties. His independent streak, however, came at the price of often-acrimonious disputes with his brothers and the disapproval of his father, whose company biography at one point removed all reference to his firstborn son.

Fred Koch’s ambitions for the future of his company were clearly invested in his second son, Charles, who came back to work for his father after eight years in Boston. A legendary toiler with a quick, questioning mind, Charles went from triumph to triumph at the rapidly growing Koch Industries. As Charles unlocked the secrets of business and personal achievement, he observed the powerful role that liberty plays in economic success, and the corresponding ways that dependence, over-regulation, and cronyism drag on productivity. His intellectual engagement with Austrian economics deepened the interest in freedom that his father had inculcated in him, and Schulman details the parallels between the central roles that Charles’s leadership has played in the astonishing growth of Koch Industries and the development of libertarian thought and infrastructure in America.

To his credit, Schulman effectively dismisses one of the hobgoblins of contemporary criticism of the Kochs—that their philanthropic giving is somehow calculated to redound to the bottom line of their business. It is impossible to read this book and fail to see that Charles and David’s support for free markets and economic liberty is based on sincere and passionate personal belief. If anything, their charitable and political giving has hurt or distracted from their business.

Charles’s charitable giving in particular has been astringently principled. The Charles Koch Foundation, founded in 1980, is dedicated to advancing the “understanding of how free societies improve the well-being of people around the world.” Through long-term investments in research on free markets and wider understanding among intellectuals and future leaders of the power of liberty, the foundation has been vital to developing libertarian thought. Charles has taken leadership roles with the Cato Institute, the Mercatus Center at George Mason University, and the Institute for Humane Studies. “I have a passionate belief in the power of the ideas of liberty,” he says. “It is to them I am dedicating my life.”

The two youngest Koch brothers, fraternal twins David and Bill, may share a birthday, but there the similarity ends. David has always had something of the golden boy about him: handsome, intelligent, charming, and successful at whatever he puts his hand to. Athletic and academic success came naturally to him, and he quickly assumed a leadership role at Koch Industries in partnership with Charles. While David clearly shares Charles’s fascination with the power of markets, even going so far as to run for vice president on the Libertarian Party presidential ticket in 1980, his philanthropy has extended into many other areas as well.

A cancer survivor, David has become a major funder of cancer research. He and his wife are also among the most prominent arts and culture donors in New York City. David was recently at the center of an interesting intersection of arts giving and property rights: He pledged $100 million toward the renovation of the New York State Theater, home of the New York City Ballet, and part of Lincoln Center. In honor of this gift, the facility was renamed for him—but only for 50 years, after which his family will have first refusal over whether to renew the funding or allow the naming opportunity to pass to someone else.

Bill Koch followed his older brother to M.I.T. and into Koch Industries, but despite his obvious intelligence always seemed to have something to prove. Pugnacious and ambitious, over time his disputes with Charles and David became so toxic that they felt compelled to buy him out. Unhappy with the size of the settlement, Bill enlisted Fred in a series of painful, scorched-earth lawsuits against Charles and David. Though the brothers ultimately reconciled, the years of tortuous depositions and testimony sparked by these acrimonious cases provided ample grist for today’s opponents of Koch Industries, as well as the personal information (much of it no doubt mortifying to the family) that is detailed in this book.

Bill Koch’s colorful story could itself fill a book twice this long. An innovative and successful entrepreneur on his own, Bill’s philanthropy has reflected his diverse interests. From sailing (he won the America’s Cup in 1992) to collecting (his art, gun, and Old West memorabilia collections are all world class), Bill’s funding has tended to follow his own muse. Indeed, the title of a Boston Museum of Fine Arts exhibit displaying his various treasures was “Things I Love.” Emblematic of his passion is his campaign against counterfeit wine: upon discovering that the celebrated bottles of Thomas Jefferson’s Chateau Lafite that he had purchased for $500,000 were fraudulent, he didn’t skulk away in embarrassment or seek a refund—he went on an aggressive litigation crusade. As a public service, he single-handedly took on and sought to legally destroy the shadow market of fraudulent fine wine. And eventually he won—pocketing not just his initial investment, but $12 million in punitive damages.

Beyond its personal fascinations, this book is a treasure trove for readers with an interest in the history of the libertarian and conservative movements, featuring telling anecdotes about many familiar, and some unfortunately forgotten, names. While libertarianism is clearly not Schulman’s area of expertise, he at least (unlike Jane Mayer) recognizes the intellectual seriousness of these schools of American thought, and draws out the influence they had on Fred Sr., Charles, and David—and the profound influence that they are in turn exercising on American politics. Charles, Schulman writes, “has arguably done more than anyone else to promote free-market economics and the broader ideology surrounding it. By mainstreaming libertarianism, he helped to change the way people think. Absent his money and strategic vision, the country would be a different place. Few people can claim they changed the world, but this is undeniably true of Charles. And he’s not done.”

The great, potentially fatal, flaw of this impressively researched and well-written book is that Schulman was unable to talk on the record with his subjects or many of the people closest to them. No doubt, people in the know could point out errors in this book. But the portraits that emerge do ring true. The reader finishes the book with four new acquaintances: excitable youngest brother Bill, eager to prove himself to his family and the world regardless of cost; Fred, the somewhat estranged, intensely private aesthete; the bright, loyal, well-liked all-star David; and Charles, whatever the organized effort to turn him into an evil mastermind, one of the most successful and intellectually consistent business leaders of our time.

Tom Riley is a contributing editor to Philanthropy.