Prior to chemistry, there was alchemy, the Middle-Age practice of combining mixtures of substances together, along with incantation, in search of elixirs of life. In the modern era we use the word to represent a mixing of substances of little value to produce something of real worth, a magical transformation of banal to beautiful. Can this combinational miracle take place with people?

In The Kelloggs: The Battling Brothers of Battle Creek, doctor and medical writer Howard Markel examines the lives of two brothers: John Kellogg and Will Kellogg. One domineering and cruel, the other brooding and repressed, their personalities and actions meld and combust in two monumental efforts at advancing health: the Battle Creek Sanitarium, and breakfast cereal. While each brother would rather be free of the other, it’s their twisted, cyclical relationship that keeps the reaction, and their success, bubbling. 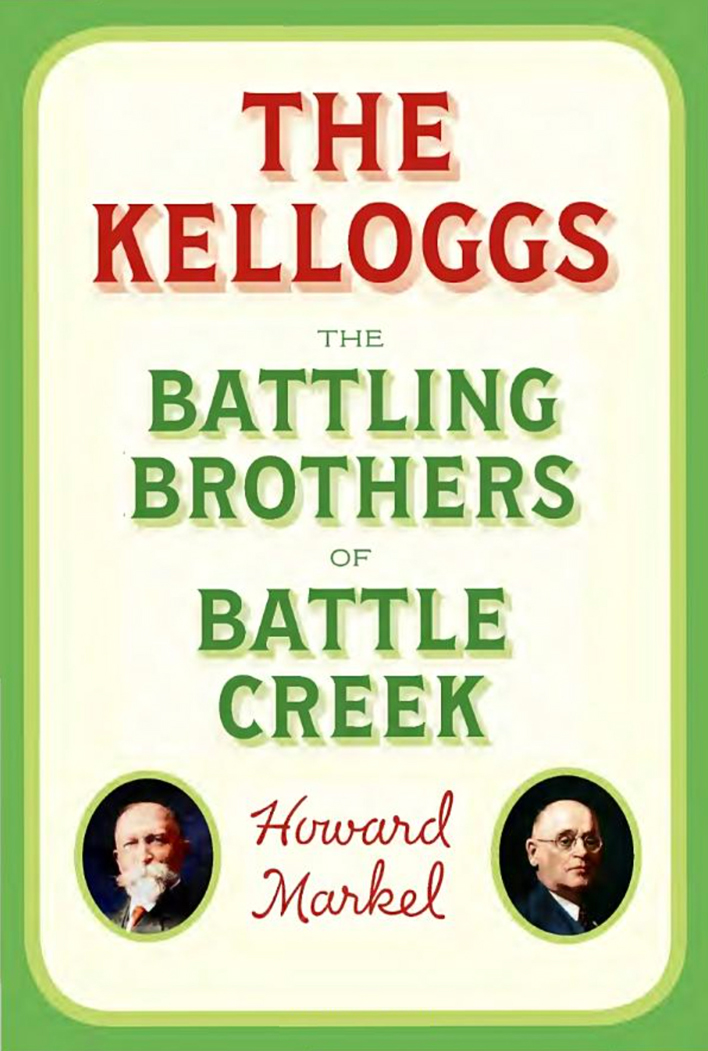 The  Kelloggs: The Battling Brothers of Battle Creek By Howard Markel

John was the chosen one in the family, doted on by his parents and celebrated by the Seventh Day Adventist church—which paid for him to receive the best medical training available in the U.S. Given influence and power at a young age, John was begged to take hold of the Western Institute, a Seventh Day Adventist facility committed to the cause of “health reform.” He wrote articles, edited journals, and spoke around the nation about “biologic living,” an advanced early understanding that well-being is strongly influenced by actions such as eating “healthy” foods and not smoking.

Will, on the other hand, was taught to make brooms. Working long hours in his father’s factory, he rose to be a salesman and showed himself a skillful manager. But accolades for his achievements were withheld, and after a failed trip to Texas to save the endangered broom factory of another Adventist, Will came home to Battle Creek and took a job with his brother, who had big plans for the Western Institute, plans that in hindsight only a sterling executive like Will could make a reality.

What emerged was the Battle Creek Sanitarium, a national destination for medical treatment and recuperation and preventative care, replete with an impressive dining room serving healthful fresh foods produced right on the property of the “San.” As John’s fame grew and guest visits increased, Will ran the organization with exacting precision, and the San became its own nonprofit separate from the Adventist church. John received more and more speaking engagements, courted celebrity patients, and saw his ideas go from outsider’s fancy to growing norm.

But the San’s rise did not result in increased rewards for Will, who worked long hours for incommensurate pay, suffering insults and public humiliation from the mouth of his brother often enough to be noticed by staff. Some accounts note that while John biked he made Will jog beside him to record his thoughts, and that he even made Will follow him into the bathroom so he could dictate on the pot. There was no task too menial to be assigned to Will and no performance adequate to meet John’s vision for a better, bigger San.

It was during this era of working together that the brothers began to experiment with creating processed foods, using the dining room at the San as their test audience. Fixated on the gastrointestinal system, John applied his mind to finding foods that spurred regular, smooth bowel movements, reduced gas, and limited constipation. Will took notes and experimented himself. Guests at the San were welcome to purchase boxes of these foods, and one of the dry cereals, a flaked corn, was increasingly popular. Who perfected that flaked corn process would be a source of mystery, animosity, and legal wrangling for years to come.

Will told his imperious brother, who was always in search of more money to build up the institution, that there was potential in the cereal business. John wasn’t convinced, claiming that the Sanitarium’s inventions were meant to be enjoyed by all, not used for profit. But when former San patient C. W. Post left the dining room and started a lucrative cereal business, Will decided to pursue his own venture. A devastating fire delayed his departure, but by 1903 John’s rebuilt San was gleaming, and Will was finally free of his brother’s oversight. Even decades later, Will would tell employees leaving the San that “your happiness is just beginning.”

Not long after Will declared his independence, the turbulence between the brothers boiled over. Will bought from his brother the right to sell the San’s pressed-corn breakfast food. Under Will’s discipline, his Kellogg’s cereal company grew and grew and grew by selling “corn flakes” to Americans seeking more convenient, tasty, and healthy breakfast foods. John cultivated a rival cereal company, also called Kellogg’s. Will litigated. In court, the brothers’ differences came into stark relief. John demeaned Will, claiming that calling the company “Kellogg” took advantage of John’s good name, as he was the only famous Kellogg and his medical support for the product was assumed. He spoke of Will as his lackey and flat-minded minion. Will was cool, logical, and to the point—the point being that Will had John’s relinquishment of the rights to corn flakes in writing, and that the name on the box was W. K. Kellogg, one Will made popular through mass advertising and quality production. The courts ruled in favor of Will, and the brothers, now bitterest of enemies, never resumed their relationship.

The brothers were on divergent paths. John continued to be well known, but by his old age he had lost his status in the Adventist church, and control of the San. While he was still known for treating patients like Henry Ford, John D. Rockefeller Jr., and George Bernard Shaw, he was increasingly known in medical circles as something of a quack. His behavior grew erratic; he was seen in Florida sunbathing in a ragtag man-thong.

The trajectory for Will was quite different. Though reticent to the very end, and by no means a happy man, he hosted Hollywood belles in Pomona, cultivated one of the finest Arabian horse stables in the United States, and successfully ran a company known the world over. He left the bulk of his fortune to the W. K. Kellogg Foundation, hoping needy children could have more of the joy that was missing in his life. Today this foundation, located in Battle Creek, has $9.5 billion in assets and gives over $400 million a year. One of the largest foundations in the United States, it was one of the foremost funders of the community-college movement, and has taken on causes affecting women and children like dental care, early-childhood education, and support for working families. Interested, like the Kellogg family, in transforming human nature and society, the foundation has funded many liberal organizations like the Tides Foundation, NAACP, Southern Poverty Law Center, and others promoting equality causes.

John, although certainly less wealthy than Will, nevertheless made serious contributions of time and treasure himself, in his case to the disreputable cause of eugenics. John fell for many fads of his day, more and more so as he aged, and he used his star power in retirement to gather luminaries to promote manipulations of the gene pool for social betterment. John left his assets to his philanthropy, the “Life Betterment Foundation,” for this purpose. Markel documents John’s actions that diverged from the cold utilitarianism of the eugenics cause—he adopted many children off the streets and from dire situations, with the full expectation that discipline and a healthy environment could turn them around. The eugenic stain on his character, however, will never wash away.

At points it appears that Markel is trying to restore an appreciation for John. He certainly argues that his medical achievements are undervalued. And while the doctor certainly had some wild theories, some of his “radical” ideas appear commonsensical today. There are also many pages dedicated to the evolution of medicine in the Kelloggs’ day, and anyone curious about the development of medical knowledge will find plenty to soak in.

Although Markel makes a valiant effort to do them both justice, the majority of ink is spilt for John and not Will. Perhaps made chary by being forced to defend his reputation in a courtroom, Will was hesitant to even release bios of himself for business publications. He had his personal diaries kept under lock and key at the W. K. Kellogg Foundation, and even today no author may view them without foundation approval of the author’s final text. Markel would not agree to that, and therefore never saw the diaries. Instead he used as a research base a biography of Will produced by his grandson. And of course, he has Will as described in John’s copious letters and notes.

But overall, Markel’s book is not about either John or Will. It’s about their psychologic drive to outdo, belittle, and push one another. It was this cocktail of cruel competition that fueled the public-health innovations of the Sanitarium, and the golden-brown flakes delivering vitamins and calories to countless Americans who just wanted a healthy, filling breakfast.

Ashley May is managing editor of Philanthropy