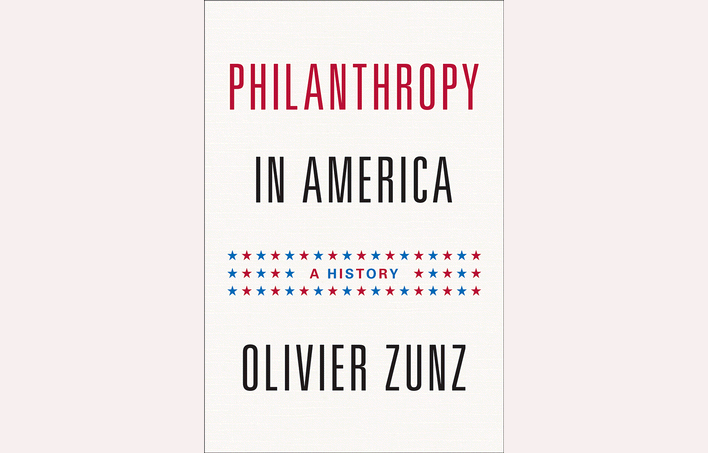 And that, in a nutshell, is what makes American philanthropy unique. Overwhelmingly, the great American cultural institutions and universities, unlike those of Europe, were founded or endowed by individuals. And this is no new development. It was in 1638, only 18 years after English settlement in New England began, that John Harvard left half his monetary estate and his 400-book library to the two-year-old college that was soon named for him. Nor is such generosity restricted to the very wealthy. According to Giving USA, in 2010 (the most recent year for which statistics are available) Americans gave a total of nearly $291 billion—a little more than 2 percent of GDP—to charitable causes.

American philanthropy has a long and rich history; its reach is wide and deep. But, oddly enough, it is a tale seldom told. Indeed, the last one-volume narrative history of American generosity was Robert Bremner’s American Philanthropy, written 50 years ago.

Now there is Olivier Zunz’s new book, Philanthropy in America: A History, part of the Politics and Society in Twentieth-Century America series, published by the Princeton University Press. Its being a part of a series on the 20th century, however, is a clue that this book is somewhat misnamed. Instead of being a general history of philanthropy in America, it is a history of philanthropic foundations in America, a history that primarily takes place in the 20th century.

Even America’s early, 19th-century philanthropic foundations are given rather short shrift. George Peabody (1795–1869), for example, is barely mentioned. But Peabody is a seminal figure in both finance and philanthropy. An American banker who lived much of his adult life in London, he and his partners (including Junius Morgan, father of J. P. Morgan) created one of history’s greatest merchant banks—as well as several charitable trusts that still exist today. His philanthropy was so extensive that, when he died, he received an official funeral at Westminster Abbey. When his body was returned to the United States, it was carried in honor aboard the HMS Monarch, Britain’s largest warship, and accompanied by vessels from the American fleet.

Or remember Peter Cooper (1791–1883). Cooper had little formal education, thanks to an impoverished childhood. When he could afford it, he hired tutors to teach him at night, which led directly to Cooper’s interest in funding night schools so that working men could acquire an education and move up in the world. The Cooper Union in New York, one of the country’s great engineering schools, remains to this day tuition-free, thanks to Peter Cooper’s endowment. But Cooper is not even mentioned in Zunz’s book, although he and Peabody were boyhood heroes to many of the men who went on to create the great foundations of the early 20th century.

Zunz, the author of Making America Corporate: 1870–1920, is an organizational historian in the mold of the late Alfred Chandler. He just seems more comfortable dealing with large organizations, like the major foundations. As a result, the book concentrates almost entirely on the foundations themselves, not on the often fascinating individuals who made the money that made the foundations possible. The approaches to philanthropy of these people were often strikingly different. For instance, John D. Rockefeller had a staff to thoroughly investigate any proposed donation before the money was given. J. P. Morgan, on the other hand, could be astonishingly slapdash about it. When Harvard was trying to fund a new campus for its medical school early in the 20th century, a group approached Morgan for a contribution. He told them he was pressed for time and asked to see the plans. They unrolled a blueprint and Morgan looked at it for a second then stabbed it with his finger, saying, “I’ll build this and this and this. Good day, gentlemen.” By removing the individuals, with all their quirky passions and oddities, much of the human interest is lost.

Zunz seems particularly taken with the grand ambitions of 20th-century foundations. “American philanthropists’ most important innovation,” he writes, “was to envision an unlimited agenda of works, in which participants redefined goals as circumstances changed.” But in turn he pays far less attention to what he calls the “mere charity” involved in helping individuals who need help. And he glides over the fact that the “transformative potential” of the major foundations—their ability to change fundamental causes of poverty and other social ills—has been much more limited than the management of the foundations would like to believe (and would like you to believe).

This is not to say that Philanthropy in America is not without its virtues, by any means. It is a solid history of the foundation-building movement that began in the late-19th century and continues to this day. And much of that history is fascinating. Zunz recounts a number of largely forgotten historical episodes. He describes the rise of associated philanthropic groups (like the United Way or the March of Dimes), the anti-communist efforts of American foundations early in the Cold War, and even the critical support provided by J. Howard Pew to an up-and-coming Billy Graham.

Naturally, this brought down the wrath of many Southern politicians who opposed desegregation. Rep. Wright Patman, for instance, had been a congressman from east Texas since 1929 (he would hold his seat until his death in 1976, at the age of 82). He very much came out of the American political tradition of Andrew Jackson and William Jennings Bryan, one that looks on great wealth and all its works with the deepest suspicion. Patman was fiercely opposed to foundations, whose charitable work he thought should be handled by government. As Zunz points out, the only big government institution that Patman opposed was the Federal Reserve, which he thought catered to the powerful.

(Unfortunately, Zunz rather typically misses a chance to bring Patman’s animosity to vivid life. When Arthur Burns, the Chairman of the Federal Reserve Board, came to testify before the House Banking Committee in the early 1970s, Patman was chairman of the committee. He famously started the proceedings by asking, “Can you give me any reason why you should not be in the penitentiary?”)

Patman was also a segregationist and a fierce opponent of the civil rights movement. As a young man, Patman introduced a bill in the Texas House of Representatives which would have outlawed interracial intercourse. He signed the 1956 Southern Manifesto. He hated foundations because, as Zunz writes, he thought that “philanthropy was a means to avoid antitrust legislation, hide dubious financial transactions from scrutiny, and influence the public through the funding of media.” But he also hated foundations because of their support for racial integration and civil rights.

And he was not alone. As the civil rights movement reached its climax in the mid-1960s, many Southern members of Congress, while they thought Patman’s obsession with foundations to be a bit crackpot, also saw his investigation as a means of retaliating against them for their support of civil rights. They did not couch it in those terms, of course, arguing instead that these were necessary reforms (and some of them were indeed necessary, such as requiring minimal annual disbursements). Many, including Sen. Al Gore Sr., of Tennessee, wanted to limit the life of foundations to 40 years, claiming that otherwise the “dead hand” of the foundation’s creator would, over time, commit the wealth to irrelevant causes.

(Defenders of perpetuity pointed out that the Rockefeller Foundation had funded the Green Revolution, the Carnegie Corporation had launched the Children’s Television Workshop, the Commonwealth Fund had greatly improved medical education, and the Danforth Foundation had strengthened historically black colleges in the South—all after their 40th birthdays. In the end, the idea of a “death sentence” at 40 years failed in the Senate, 53-35.)

These events, which culminated in the 1969 tax reforms, are a vitally important episode in American philanthropic history, and Zunz sketches them well. But in doing so, he never mentions the ironies of the affair. Among the most vocal champions of greater transparency were Southern segregationists; the idea that tax-exempt assets are essentially public monies found a particularly sympathetic ear among the opponents of civil rights. In today’s philanthropic sector, those who style themselves the champions of civil rights must be surprised to find that their beliefs about charitable giving so closely align with the beliefs of Southern segregationists.

“That American giving on a large scale reflects altruism, there is no doubt,” writes Zunz in his conclusion. “But Americans of different wealth and culture have turned a universal desire to do good into a distinct brand of philanthropy. They have learned to turn market profits and market methods into a philanthropic engine powerful enough to influence the course of their history.” Zunz tells a part of that story very well, but it is only a part. A richer and fuller history of American generosity is yet to be written.

Contributing editor John Steele Gordon is the author, most recently, of An Empire of Wealth.