Good Habits Aren t Dead, They re Only Sleeping 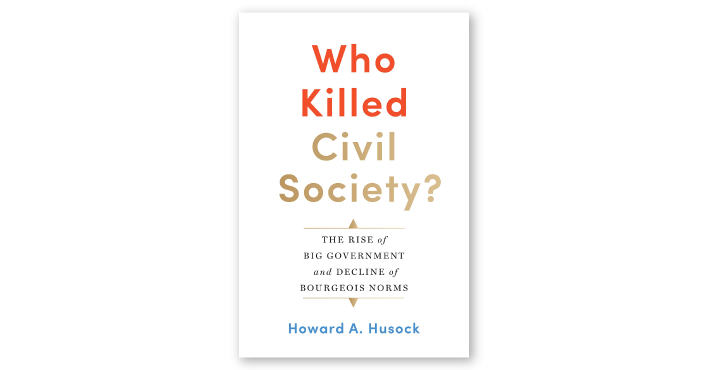 Who Killed Civil Society? The Rise of Big Government and Decline of Bourgeois Norms

By Howard A. Husock

Those who celebrate the achievements of American civil society and the citizens whose public-spirited contributions in countless areas keep it thriving will get a shock from the title of this concise book. Who Killed Civil Society? seems like an overstatement. Readers who make it to page 16, however, get a half- apology: “The title of this book may be hyperbolic, in suggesting that American civil society is dead,” writes the author. More precisely, he explains, “This book charts the withering of a particular kind of civil society organization, one that is dedicated to promoting the social norms that enable the poor to rise and prosper.”

Howard Husock, a scholar at the Manhattan Institute, introduces his subject through family history. His father Bernard was a Jewish immigrant from the Ukraine whose parents had died by the time he was ten. The young orphan made it through his school years in South Philadelphia without running into trouble thanks to ever-present support and guidance from what his father simply called “The Agency.” Years later, Husock discovered that “The Agency” that rescued his father from homelessness and privation was the Juvenile Aid Society.

JAS was a non-sectarian charity for aiding immigrants. It was funded by private individuals and organizations, and largely staffed by volunteers. The volunteers were “messengers from the middle and upper classes, tasked with teaching the right behaviors and habits to set the table for healthy living and future success.” One of its backers, a Mrs. Sternberger from Rittenhouse Square, arrived regularly in a chauffeur- driven Cadillac to visit with the volunteers and the children. Her message, like those of hundreds of similar agency backers, was self-respect, high principles, honesty, right behavior, and recognition of the moral law. She also urged the children that when they grew up into good and true Americans, they should look for ways to help new generations of needy people through their own giving and volunteering.

After introducing us to the Juvenile Aid Society, Husock describes the life work of dedicated persons laboring to help the poor at other similar charities, especially men and women who helped poor children maximize their chances for life success. Individuals who devoted themselves to instilling in the less fortunate the norms of behavior essential to happy and honorable living—like Charles Loring Brace of the Children’s Aid Society, Jane Addams of Hull House, and Mary Richmond of the Charity Organization Society—were celebrated a hundred years ago for their charitable achievements in foster care and social work that nurtured both body and soul. Today, they are barely known.

As the twentieth century progressed, norm-based aid to the poor was pushed to the side. A new wave of activists such as Grace Abbott and Wilbur Cohen came to the forefront.They “treated financial need as evidence of the market economy’s structural failings, rather than calling for steps to prepare the poor to succeed in it.”These people devoted their lives to creating programs whereby the government transferred all sorts of benefits upon the needy and vulnerable, while making no behavioral suggestions or demands. The vast difference between these two approaches to assistance is the heart of Husock’s analysis. Government is now a provider of cash and services: housing, family income, foster-care placement, unemployment compensation, founded on the idea “that the poor are victims of circumstances beyond their control. Government can’t provide the intangible guidance that civil society can offer, such as advice on how to gain control, or agency, over one’s circumstances.”

Charities which began with the conviction that “it is bourgeois norms that empower the poor to rise in a society of opportunity” were gradually converted to a very different approach by theorists like Abbott and Cohen. “Forces were set in motion that drew private civil society groups into an embrace with government— an embrace tightened by funding—which over time pulled them away from the broad promotion of social norms.” Instead, social-service agencies would hand out compensatory benefits, “and at the same time advocate Progressive policy reform to correct what they viewed as a dysfunctional economic system.”

A useful point for dating this malign trend was the creation of the Children’s Bureau in the Taft administration in 1912. Abbott ran an in-house advocacy cell within the bureau that provided no social assistance at all, but insistently lobbied for a wide range of Federal programs and regulations. From thence emerged, over the next half century, a surge of rules and entitlements disconnected from any human mentoring.

Perhaps the crowning achievement of this regrettable progression from instilled norms to delivered benefits was enactment of the 1962 Public Welfare Amendments which entrenched the national social- service state. That legislation pumped money to the states and increasingly toan assortment of nonprofit organizations dependent entirely on government grants and contracts. (Interestingly, Wilbur Cohen, the architect of the Amendments, later described them as “a dismal, 100 percent failure.”)

So here’s where we’ve come: A century ago, the norm-setting retail model of aiding the poor often got impressive results. But shaping the behavior and values of the poor cannot be “scaled up” quickly, and in any case government is in no position to define and organize character formation, or enlist volunteers to make “friendly visits.’’ Instead, the anti-poverty focus became wholesale retooling of the market economy and vastly expanded payments to individuals by social- welfare bureaucracies.

The norm-setting model of aiding the poor often got impressive results. Today, anti-poverty efforts are focused on personal payments and wholesale retooling of the market economy. Is there hope for escaping this impersonal, inhumane situation? Husock lauds the example of the privately funded Harlem Children’s Zone, designed and led by Geoffrey Canada and heavily endowed by philanthropist Stanley Druckenmiller. Thanks to a lengthening list of contributors, the Zone has expanded its services to thousands of young people, without ever losing sight of values and principles that would have excited the admiration of Charles Loring Brace and Mary Richmond. (Canada turned away an offer of a fundraiser by a rap musician known for violent lyrics.)

Other encouraging examples cited by Husock include Alice Ely Chapman’s Education Foundation in Marietta, Ohio, and Mack McCarter’s Community Renewal Initiative in Shreveport, Louisiana. Even in the face of shining examples, though, the hardened social- welfare professional will skeptically insist that “none of those admirable local efforts can be scaled up to meet the needs everywhere in America.”

Husock’s reply to that would be that “norms matter,” like it or not, convenientor inconvenient. Rather than giving up on changing self-damaging behavior he calls for “serious effort from outside the agencies of government…. A renewal of bourgeois norms will require decentralized action and personal commitment…a renaissance of civil society.”

The author is quick to admit that “the multibillion-dollar social-service state cannot easily be reined in or rolled back.” And calling asocial behavior to account would also require a stark shift in the teaching of social work. We’ve got our work cut out for us if academics, federal employees, and philanthropists are going to start treating negative life choices as more than just the result of “an unjust social structure.”

Husock, though, separates the difficulty of changing policies from the truth of social analysis. He urges that “the twin ideas of personal encouragement and individual responsibility, and the message that the social and economic systems in America will welcome those who are prepared to take advantage of opportunity, add up to an optimistic vision for the future that is supported by history. It merits rediscovery and renewal.”

Yes, it does. And that will require civic, philanthropic, and political leadership. We need to celebrate successes like the Harlem Children’s Zone. We need to befriend and reward those who connect aid with encouragement and responsibility. We need to regenerate among the American people an enthusiasm for the influence of one supportive individual upon another. People need to recognize that civil society is powerful, far from dead, and will produce wonderful and humane results if we will unfetter, stimulate, and celebrate it.