No Giver Is Safe

In our current socialist moment, a veritable race is underway among journalists, academics, and politicians on the Left to outdo each other in thundering against business enterprise and personal wealth—and the private charitable action that flows from them.

The Model U.N. program now assigns “Toxic Charity” as a debate topic for schoolchildren. The New York Times editorial board has declared the famed Carnegie Libraries a “failure of public policy.” The “Top Big Picture Trend” of 2019, according to “Inside Philanthropy,” was today’s “Backlash Against Philanthropy.”

A recent cover story in what’s left of Time magazine chirped excitedly that there are now more than 50,000 “dues-paying members” of the Democratic Socialists of America scattered across our fruited plain. The author is one of today’s most doted-upon critics of philanthropy, and he urges “solidarity” with “fresh” enemies of capitalism like Alexandria Ocasio-Cortez and Bernie Sanders who will “put American business in a headlock.” He flames “plutes” (his sneer for “plutocrats” who are wealthier than him) in the hope that depersonalizing opponents (as was done with “kulaks” in the Soviet Union and “capitalist roaders” in China) makes it easier to discard them.

The deep odium for personal wealth and private problem-solving that is nursed by fashionable chatterers today often surges into view when businesspeople take up philanthropy. Jeff Bezos donates a million Australian dollars to fire recovery and the plute-smashers swing their axes. The $14 million Jack Ma puts up for a coronavirus vaccine is characterized as a pittance. David Rubenstein offers to renovate the Jefferson Memorial and other historical landmarks and gets attacked for being a private-equity villain. For crusading against malaria, Bill Gates is portrayed as a vainglorious megalomaniac.

As their real-world cure for “uncontrolled” philanthropy, these critics now openly call for confiscation of private wealth. “Say Bill Gates was actually taxed $100 billion,” Bernie Sanders tweeted recently. “We could end homelessness and provide safe drinking water to everyone in this country.”

The same journalist who wrote the recent Time cover story also authored a book savaging philanthropy. He attributes to donors every imaginable motive—vanity, cynical reputation laundering, undemocratic manipulation, drop-in-the-bucket cheapness—except altruism and good faith. For these fashionable arguments the work was anointed a “book of the year” by the Washington Post, the New York Times, and NPR.

Other critics make the same arguments. Philanthropic giving is “an undemocratic exercise of power” which should be wielded only by the state, says Stanford’s resident philanthropy academic. Even well-intentioned charitable efforts must be shut down, say the new activists, because they undercut the revenue and authority of the federal government. Powerful interests ranging from elite media to Democrats running for President insist that only government officials should be allowed to improve public welfare and reform society.

These ad hominem attacks and sweeping arguments are gradually poisoning the American public on philanthropy. More citizens every year are being convinced that private giving is just a racket run by moguls to aggrandize themselves. A “billionaire boys club” that numbs, deceives, and controls the rest of us. A means of deception and selfish string-pulling, rather than a way of helping the country or our fellow man. With this kind of rhetoric constantly in the media, cynicism about charity is swelling. Public views of nonprofits are at a nadir, and U.S. giving rates are tumbling.

This is deeply dangerous to the nation—because energetic private giving is one of America’s most valuable sources of ingenuity and social repair. Every single year, hundreds of billions of dollars ($428 billion last year), and hundreds of billions more in the value of volunteer time, pass willingly from generous helpers to others who are struggling. Our long tradition of improving society through the organic private action of civil society, mostly on a local level, has long been one of the distinguishing strengths of our country. Nothing like our charitable sector exists in any other land. It is one of America’s most unusual, and beautiful, anomalies.

And here’s the most troubling aspect of today’s noisy attacks on philanthropy: They are utterly false in their most fundamental claim. Our giving is not dominated by crafty tycoons. Emphatically not. 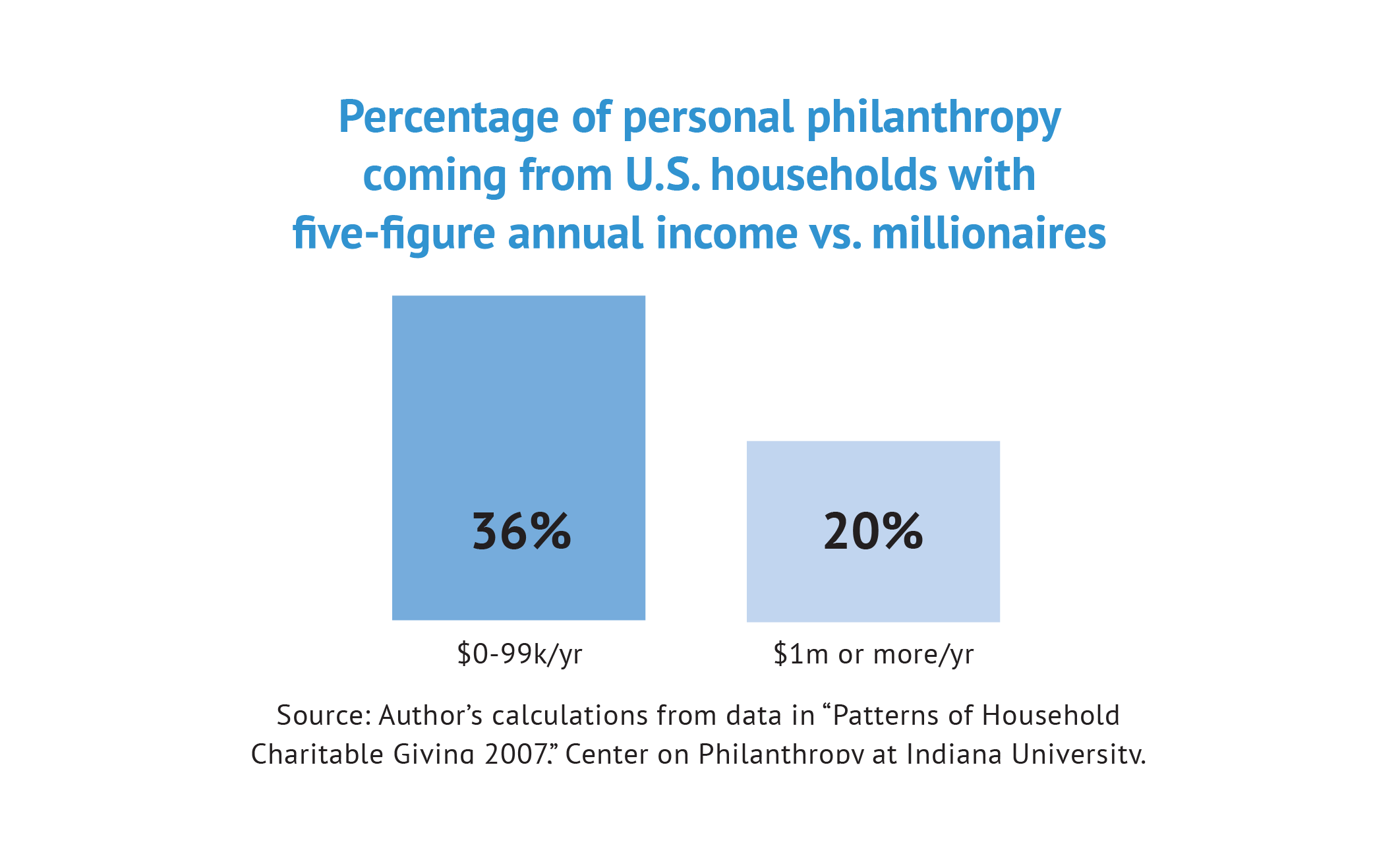 The fact is, only 20 percent of personal giving in the United States comes from the “plutocrats”—people making $1 million a year or more. Fully 80 percent comes from non-millionaires.

Indeed, the portion of individual philanthropy coming from households with modest annual incomes of five figures or less is close to twice as large as the portion coming from people in million-dollar households. See data nearby.

Portraying U.S. private giving as a Game of Plutes is not only dangerous and un-American. It is factually wrong.

Karl Zinsmeister is editor in chief of Philanthropy magazine.