Panning Some Gold Out of Brown

Too much of good things 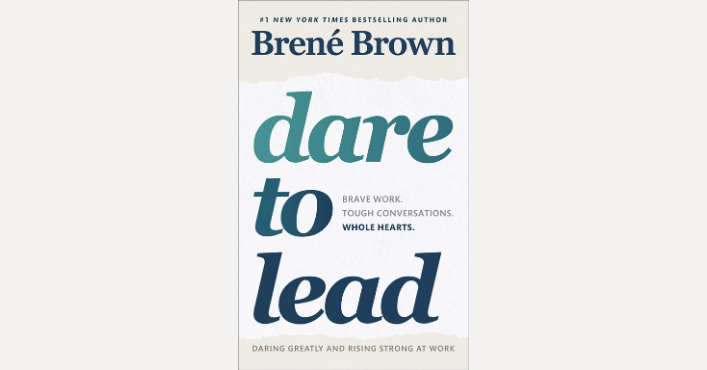 Early on in Dare to Lead, pop counselor and pep talker Brene Brown discusses her work with Alcoholics Anonymous. She notes that the program’s slogans, like “One day at a time” and “You’re only as sick as your secrets,” seem simplistic—yet all are true. “It does look like a Saturday Night Live skit where there are ten posters hanging in a row on a wood-paneled wall in a church basement, but they are the damn truth, and if you live by them they will rock your world.”

My verdict on Brown’s book would be something very similar to that. Her slogans, phrases, memes, and acronyms pile one atop another to the point where it’s sometimes difficult to know if this is the product of voracious notetaking at a hotel seminar, or a book written specifically to be turned into a future seminar. Catchy memory cues and terms like “chandeliering,” “bouncing hurt,” “gasp and awe,” or “square squad” are effective until you feel overwhelmed by their very catchiness. It’s hard to keep up with the pace. It soon becomes too much of a good thing. That said, what is Brown’s good thing? And how might her truths be applied to philanthropy?

The place where Brown can perhaps help donors most is her thinking on how to build trust. Her insight is that trust doesn’t happen coincidentally while we work on other things—we have to build it up by taking risks. The scary part, she explains, is that you become vulnerable in the process. She talks about “having the courage to show up when you cannot control the outcome.”

The hardest trust-building comes when the personal values of each participant are different. If there is to be any chance of meeting in the middle, you must demonstrate the utility of your values, not just preach them. “The reason we roll our eyes when people start talking about values is that everyone talks a big values game but very few people actually practice one…. If you are not going to take the time to translate values from ideas to behavior…it’s better not to profess any values at all. They become a joke. A cat poster. Total BS.”

Rob Martin, author of When Money Goes On Mission, tells of a grant from a foundation earmarked for an elevator during a building renovation. Foundation staff stopped by to check on the progress, and to their surprise and disappointment discovered the funds had been used for another project. The promised elevator was nothing more than an empty shaft. This could have ended badly for both parties, but instead the funder turned it into an exercise in leadership.

They initiated the hard conversation, but it wasn’t one of blame. A central value of the foundation was respect for the grantee, so the leaders talked about trust. Specifically, the importance of meeting promises if there was to be a continuing relationship. They made a plan with the grantee on how to recover from the failure without misery or shame.

That is not easy. It takes years of practice. Many foundations would have responded less sympathetically. As a result, grantees dread to report disappointments. Many avoid acknowledging failures, or shift blame, or glibly chalk up collapses as “learning experiences.” Nothing is more likely to unravel a relationship.

When I ran The Gathering as a convocation of like-minded donors, we made great effort to build up trusting relationships. And when we asked people what they found valuable in their association with our community, trust was uppermost on the list. When real trust exists, people have the freedom to disagree without rancor. They go beyond sharing successes and speak honestly about disappointments as well, in the hope of helping someone else profit from their shortfall. When people are in a place that is safe but not sterile, they find their thinking stretched in positive ways.

Trust cannot be artificial. And it cannot be force-fed. I learned that trust first has to be built up within the board and staff of an organization. Then it can work its way down into the wider relationships of the group.

I don’t know of a definitive handbook for encouraging vulnerability and building trust in an enterprise. But Brown’s
book has some useful guidance on this important topic. If you can wade through the onslaught of catchy phrases, you’ll find there are helpful guidelines here. Donors who are able to translate her precepts into genuine trust will find that their gifts to people have extra power to lift and propel.

Fred Smith founded The Gathering and served as president for 34 years.