How a self-interested banker helped millions of people prosper

Jacob Fugger, who lived from 1459 to 1525, powerfully nudged the modern world into existence. He had nothing to do with the two most momentous events of his lifetime—the European discovery of the New World in 1492 and the Protestant Reformation that began in 1517. Fugger was no seagoing explorer, and he was a staunch Catholic all his life.

Jacob Fugger was a banker. In the fifteenth century the European economy was expanding rapidly. That made bankers—who collect capital from those who have it in surplus and lend it to those who want to put it to productive use—very important. 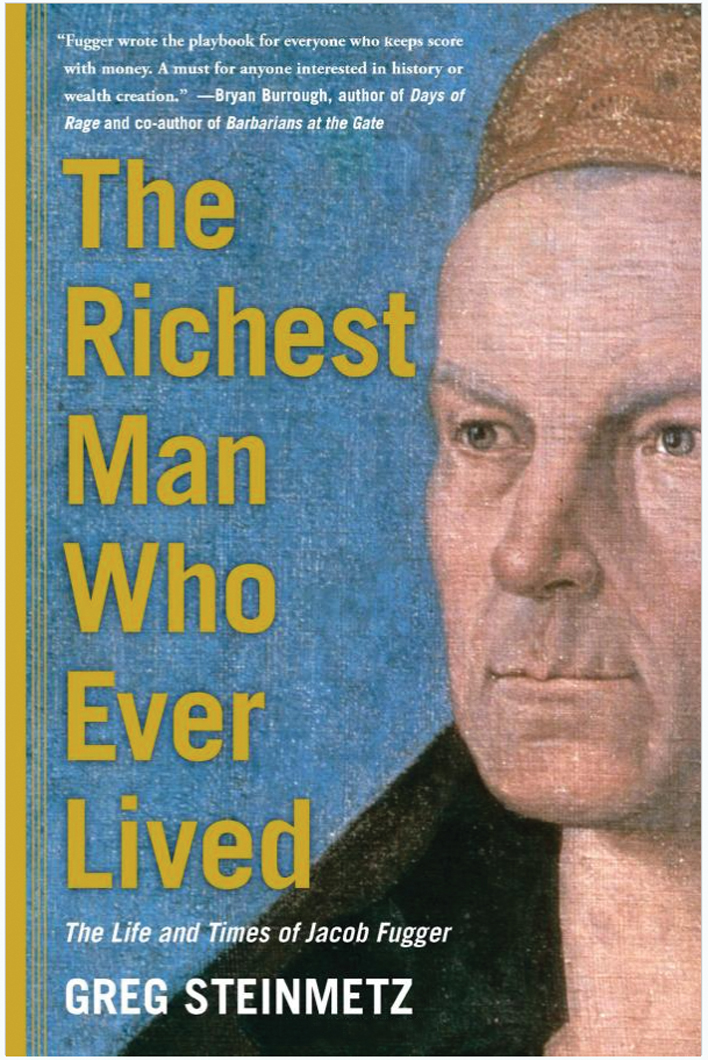 In his entertaining new biography, The Richest Man Who Ever Lived, stock analyst and former Wall Street Journal reporter Greg Steinmetz shows that Fugger was an exceptionally gifted financier, possessing in spades the dual instincts such men need if they are to succeed: the ability to correctly judge worldly risk and the ability to assess human character. With these capacities, plus a boundless ambition, Fugger became the richest and most powerful moneyman in Europe. He walked with kings and influenced them by lending—or refusing to lend—the resources they needed to realize their schemes. Active all across Europe, Fugger provided many services that other bankers could not match. For instance, it was via his banking network that small sums placed in collection plates all over Europe gently but relentlessly flowed to the Vatican.

Born into a family that had recently moved up to the burgher class (his grandfather had been born a peasant), the Fuggers lived in Augsburg, in what is now Bavaria in southern Germany. It was then a free city, answering only to the Holy Roman Emperor. A nexus of trade routes between northern and Mediterranean Europe, the town was very prosperous. By the time he was 40 Fugger was running the family bank, despite having two older brothers in the business.

Steinmetz guides the reader through many complicated historical twists. These are essential to appreciating the depth of Fugger’s accomplishments. His dealings with the Pope were probably Fugger’s most important contribution to the emergence of modernity. The work of bankers is powered by the interest they charge borrowers and pay depositors. Without this, the financier has no role to play and no contribution to make. In the fifteenth century, there was a big problem: The Catholic Church forbade charging interest, calling it usury, and a sin.

The prohibition against lending money at interest has ancient roots, dating back almost to the invention of money itself in the seventh century B.C. Aristotle, for instance, argued that while it was all right to lend someone land and charge rent, that was because land produced crops and the owner of the land should get his share. Ignorant of the concept of liquid capital, Aristotle thought money produced nothing, that it was sterile. Later, in the New Testament (Luke 6:35), Jesus said, “Lend, hoping for nothing again.” In 1187 Pope Urban III declared usury a mortal sin and both St. Thomas Aquinas and Dante denounced it.

Banking, however, cannot exist without payment of interest in return for the use of capital. As the European economy expanded in the high Middle Ages and Renaissance, the need for banking expanded with it. Jews—who were not subject to church laws against usury, and who were blocked from many other professions—often filled the economic niche for money lenders.

Although banking can be a hazardous business (especially when lending to kings, who were notorious for defaulting on their obligations), it can also be very profitable. As the economy expanded, more and more Christians, such as the Medici family, became bankers. To do so, they had to engage in subterfuge. Instead of referring to the money they earned as interest, they would call it “penalties,” or “processing fees.” Or they took payment in kind. Fugger, for instance, made a large loan to Archduke Sigismund of Tyrol that was backed by the output of silver mines the archduke owned. Fugger took his interest on the loan not in cash but in silver bullion, thus avoiding being charged with usury, even though bullion can be almost instantly coined into money.

These efforts complicated bookkeeping and contracts, though, and increasingly influential bankers wanted the prohibition against usury ended. Fugger had heard about a young theologian named Johannes Eck who argued that lending at interest was acceptable so long as the lender was assuming risk. Fugger asked him to expand on his argument and to publicly debate it with other scholars. While done in clear self-interest, his sponsorship of Eck had philanthropic effects, spreading popular understanding that charging interest was rational fairness, not exploitation, thereby normalizing capital exchanges and expanding prosperity for hundreds of millions of people.

Many intellectuals—then, as now, often more interested in theory than in real-world practice—objected to the debate, and no university in Germany was willing to host it. Undaunted, Fugger arranged the event at the University of Bologna—Europe’s oldest university—and the discussion was held before a large audience. Soon the “ Augsburg Contract” by which Fugger and other bankers agreed to pay five percent interest to depositors stopped being denounced as heretical.

Fugger wrote to Pope Leo X about a definitive change in Vatican policy. In 1515, Leo signed a papal bull specifying that “Usury means nothing else than gain or profit…that is acquired without labor, cost, or risk.” The ancient prohibition against charging interest was dead and capitalism could take a big step forward, thanks to Jacob Fugger.

In addition to his successful banking, and his successful reforming of church policy, Fugger helped bring Renaissance ideas to northern Europe. His banking house and personal residence in Augsburg were the first buildings north of the Alps to be built in the new Renaissance style. They helped popularize it.

And Fugger was a philanthropist. In 1516 he founded the Fuggerei for housing the poor of Augsburg. By 1523 it contained 52 houses, and in later years would include a church. Each apartment had its own entrance, a kitchen, parlor, bedroom, small extra room, and a garden. Still in use today, the Fuggerei is the oldest social-housing project in the world.

According to Steinmetz, when Fugger died he was worth 2 percent of the total European GNP of his day. Economic statistics of that era are few and far between, and translating the value of money over large spans of time is difficult under the best of circumstances. But whether Jacob Fugger was the richest man who ever lived or not, he was certainly an unsung hero of human prosperity, whose actions birthed our current engines of capitalist success, steadily improving the civic life that we sometimes take for granted today.