What could property rights do for Indian reservations?

Within the United States, the richest country in the world, many of the most visceral pockets of poverty exist on Indian reservations. Instead of the Edenic oases conjured to mind by legend, most reservations are reminiscent of third-world countries. Health, economic, educational, and social data paint grim pictures. The Pine Ridge reservation in South Dakota, for instance, has the lowest life expectancy in the Western Hemisphere outside of Haiti—an average of just 48 years for men and 52 years for women.

In The New Trail of Tears, Naomi Schaefer Riley colors these facts with anecdotes that illustrate the consequences of a broken system. She also crafts a compelling case for property rights and political transformation, though ultimately she fails to square the need for bone-deep reform with the unique character and challenges of tribes. Here, philanthropy may be able to help. 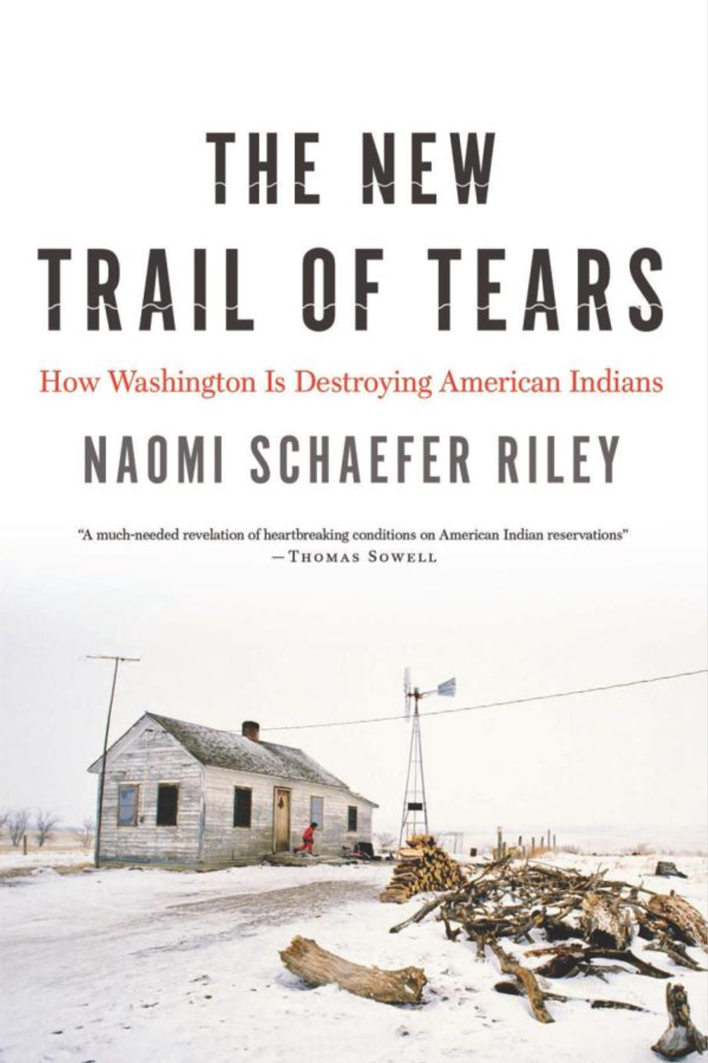 The New Trail of Tears: How Washington is Destroying American Indians by Naomi Schaefer Riley

The crux of Riley’s argument is essentially this: market forces have allowed communities throughout America, and indeed the world, to flourish. But these powerful forces for prosperity have been strangled on reservations. Natives “are the highest regulated race in the world,” as one Crow tribe member states. Major shortcomings in property rights, economic opportunity, and democratic governance yield a system devoid of personal responsibility and mobility.

Owing to policies dating back the better part of a century, most Native Americans living on reservations can’t own their land outright. They are therefore unable to make investments in real property that would turn their abundant land into an income-producing asset. Riley cites this as an example of Hernando de Soto’s notion of “dead capital”—something that belongs to people on paper, but can’t be used to economic advantage because of legal and political blockages. Riley sees this as a root cause of the myriad ills befalling reservations: derelict homes that are in essence unowned, rich soil and minerals that lie unused, barren main streets where there is no commerce or development.

Riley is at her most compelling when she chronicles failed efforts by Natives to build businesses or use property for greater gain. She cites a large hotel development that could have created many jobs, which fell apart because development on tribal land typically takes four to six times as long as it would on non-tribal land. She notes that there is a 49-step process for Natives to gain approval to extract resources from their land. Riley quotes one Native comparing his legal autonomy to that of children and the mentally incompetent.

This compounds one of the great tragedies of reservation life: a brain drain of the most capable citizens to locations that offer more economic freedom. The collective economics of the tribe stifle upward mobility and concentrate power in the hands of a few.

An ambitious policy-oriented philanthropist could work with tribes to improve public policy here. A donor could, for instance, work with entrepreneurial Natives to purchase land just off a reservation where Indian-focused businesses could be developed without the sclerosis that kills business on tribal and Federal land. This could prove that ownership rights and over-regulation are central problems, and that tribe members can prosper if there is economic liberation.

But Indian tribes and free-market capitalism have had a difficult relationship for generations. When the 1887 Dawes Act transferred some tribal lands to individuals, most plots were sold away in quick-cash sales that produced no lasting economic improvement, leaving tribes poorer in land and resources, and individual tribe members no better off long term. The bitter taste from the Dawes Act lingers. Today as well, Riley points out over and over, individuals who come into money from windfalls like tribal casino gaming tend to lose it in rapid and fruitless fashion.

So it’s not surprising that many tribal leaders have strong desires to keep lands collectively owned, believing that a continuous block of land will make it easier to preserve environments, religious beliefs, language, and culture. They maintain the century-old idea that “Your money is not as good as our land.” Jointly held land is one of the strongest ties that binds together many tribes today. If territory disintegrates, some Native Americans believe, so will their remaining identity.

To create new paradigms for community and individual prosperity, donors might support promising young Native Americans who are interested in balancing economic development with cultural preservation. There are other communities that have made the transition from collectivism to individual enterprise; these could be studied. There are opportunities for donors with a love of art, traditional culture, wise resource use, and healthy tourism to creatively encourage Native Americans and their tribal governments to find new models for operating reservations.

While a painful shift, it’s possible for tribes to survive without the land that nurtured them. Riley cites the Lumbee tribe of North Carolina, which has no reservation, as a relative success. Yet according to historian Fergus Bordewich, the Lumbee “have no memory of the tribe from which their ancestors may have come, nor the language they spoke, nor of any religion older than the…Baptist faith.” Riley sees this as proof that tribes can prove more prosperous without reservations, while many Natives see this as evidence that a landless tribe loses its character and beliefs.

If preserving religion, culture, and language are one’s highest priorities, isolated, homogenous communities distinct from the larger society might have value. That will carry many economic penalties. These ultimately make tribal thriving unlikely. But clearly a standard free-market toolkit will not work on many reservations; creative adaptations will be necessary.

Another major gateway to opportunity, as Riley notes, is education. But attempts to bring education to reservations have yielded repeated heartbreak, with outcomes landing somewhere between bad and abysmal. Riley describes entrenched opposition to reform efforts such as charter schools and Teach For America, and deep resentment against high-achieving Catholic schools. As in a number of other communities, political considerations squelch the needs of children.

Some Native schools allow Indian language and cultural education to trump the teaching of core subjects. This often sparks impassioned political support. But it dooms generations of young Indians to weak, often sentimentalized, and fragmented education.

Of course, challenging home conditions burden many Native students when they enter classrooms. How should schools overcome these? Riley seems to advocate an approach Amanda Ripley documented among successful Norwegian teachers in her book The Smartest Kids in the World: don’t focus on what the children experience outside of school, lest pity and low expectations creep into a teacher’s thinking. Instead, compensate aggressively in the classroom.

That’s why Ben Chavis, a Lumbee Indian and charter-school founder, promotes a hard-nosed mentality in his classrooms. He “sees American Indians as immigrants to the dominant American culture,” writes Riley. “They’re poor, just like immigrants, and starting from behind, so he’s proposing strategies that have helped immigrants succeed.”

Chavis’s results are impressive, but until more tribes are willing to hold teachers and parents accountable for improving student achievement, Chavis will fight a losing battle. Donors might think it wise to support existing and new programs to train the next generation of Native leaders for school reform; however, as someone with teaching experience on a reservation, let me suggest there’s little hope that swapping out leaders within failing school systems will bring about lasting change. Instead, donors should seed and bolster quality public charter schools, low-cost private schools, and parochial schools that can reach Native children. There are also intriguing opportunities for donors to support new technologies that can bring rigorous schooling to reservations in new online forms. Prudent donors beware: layering technology onto broken systems will also inevitably lead to failure.

Riley’s dim view of the current state of tribal governance doesn’t provide much hope for legislated government solutions. “The ambiguity of the relationship between tribal leaders and the federal government has created a situation whereby Indians demand more autonomy but instead are offered more money.” This trickles down. Tribes with casinos or other cash cows write free checks to members, with predictably destructive results.

The distance between the dominant American experience and Indian reservations—there are both physical and mental separations—makes many of their problems feel deeply foreign and gut-wrenching. Instead of thoughtful policy changes, the default solutions from non-Natives are just more contrition and more money. Family homes falling apart? Physical and mental ailments everywhere? Schools graduating illiterate students? Just back up the money truck, because structural reform and discipline are too slow and agonizing.

This is a warning to donors as much as to politicians. Philanthropy layered onto reservations as a patchwork of social services may ameliorate some immediate problems, but it will not address underlying issues. Givers should nurture and support organizations or businesses that encourage individuals and the tribe to take ownership of their problems and generate homegrown solutions.

Native Americans would be well served by a number of Riley’s proposed solutions. Yet those measures will only be tried if they can be reconciled with existing Native desires that their land and culture be preserved. Given the desperate failures of today’s political leadership, it’s possible that a measure of creative destruction, inherent in any capitalist effort, would provide a necessary shakeup of an entrenched, outdated system. But creative adapting and explaining and synthesizing is needed—as today’s Indian leadership will mostly meet free-market solutions in their purest forms with staunch opposition.