The Assault on Generosity and Voluntary Action

“Around the turn of the last century, the steel magnate Andrew Carnegie paid to build 1,689 libraries across the United States. Many are still in use, celebrated as monumental works of philanthropy. They should be seen as monuments to the failure of public policy. The United States could have built a lot more libraries by taxing the incomes of Carnegie.”

Those were the words of the official editorial board of the New York Times in a high-profile May 2019 screed. That’s an especially visible and flagrant example of attempts to derogate and rewrite America’s remarkable history of mutual support and social improvement through the voluntary action of civil society.

But this thrust by the Gray Lady is just one of hundreds of recent jabs into the face of philanthropy. Every few months now there is a new guru out on book tour, savaging the motives, effects, and humanity of some of our most generous voluntary givers. Here are cover lines from some of the new works dumped on America over just the last year:

These themes are being endlessly repeated in media appearances and tut-tutting speeches, some of them delivered by men and women with 2020 political ambitions. The sages tell us that wealthy donors are secret oppressors, cynically laundering their reputations, distracting us with candy, blocking the rubes who make up the everyday public from seeing that our whole system is rigged, and our country manipulated by a rotten oligarchy. Who knew that second-guessing Americans who give away money could be a full-time job?

Tax records of the individuals making these same arguments while running for President show that few such thunderers donate much themselves. Person-to-person charity is too grubby an undertaking for high moralists busy kindling bonfires under red-eyed witches like Bill Gates, Robert Smith, David Koch, Michael Bloomberg, and Mark Zuckerberg.

Journalists anoint these righteous fulminators with citations in their news stories, offering no facts or perspective on what really happens in American civil society. So we never hear that philanthropy both large and small has been hugely important in rescuing foster children, aiding the homeless, accelerating medical research, creating today’s greatest urban parks. No one mentions (or even realizes) that donors voluntarily give far more to the poorest of the poor overseas than all of our government aid put together. Americans are left utterly unaware that the two greatest public amenities in New York City—the public library system and Central Park—are neither one managed by government, but rather run by charitable entities. How many stories have you read pointing out that the best schools boosting up minority kids in the U.S. today are all donor-initiated and donor-supported? 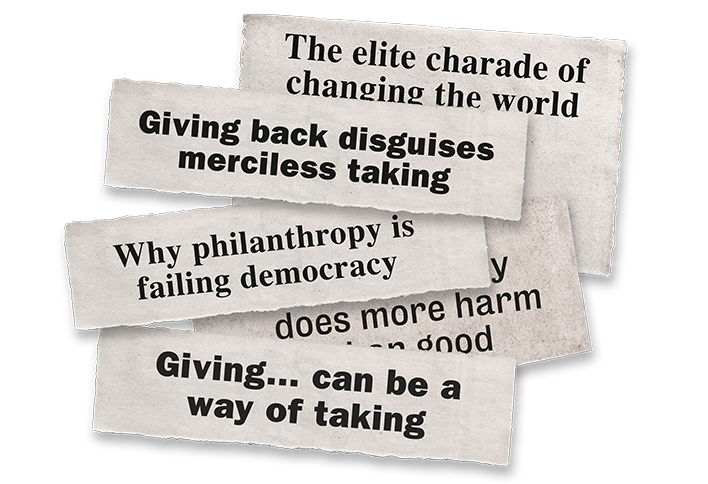 Facts like those are nowhere to be seen in what passes for journalism these days. Much more fun to jump into the echo chamber and attack the decency of Gates and honesty of Koch on Twitter.

Most of the journalists and editors handing microphones to haters of private giving like Anand Giridharadas have no idea how fundamentally inaccurate his cartoon villainizations are. They’re too ignorant about the daily operations of our philanthropic sector to recognize his malpractice. Embracing today’s excoriators is also easy because so much of the media now share kneejerk left-wing antipathies toward businessmen, wealth, religious injunctions to charity, person-to-person aid, civic localism, and other pillars of our culture of giving.

Those reflexes, however, obscure truth. Spontaneous problem-solving through private giving is a profoundly American invention, and crucial to keeping our culture and economy strong. Brooks, who is better informed than the anti-philanthropy crowd, calls voluntary action “the central feature of American life.” Yet the media “barely cover” it. This leaves journalists blind to our country’s “most important social change agents.” Today’s national narrative, he warns, is controlled by people who are obsessed with politics, while “the 90 percent of our lives” dependent upon civil society is blacked out. That makes it easy for the distortionists to tell fables and fibs about philanthropy and mutual aid.

Alexis de Tocqueville considered America’s tradition of citizen initiative to reform and repair communities without resort to impersonal, bureaucratic, coercive mechanisms of government to be the most original and valuable creation of our new civilization. That priceless American innovation is now under ferocious, concerted, coordinated attack. Enemies of private giving and voluntary action are insisting that only government should be allowed to improve the common good, and that alternatives to state power must be shut down, or taxed away.

If you haven’t already realized all of this, it’s time to wake up. And punch back.   —Karl Zinsmeister