The Church and Civil Society 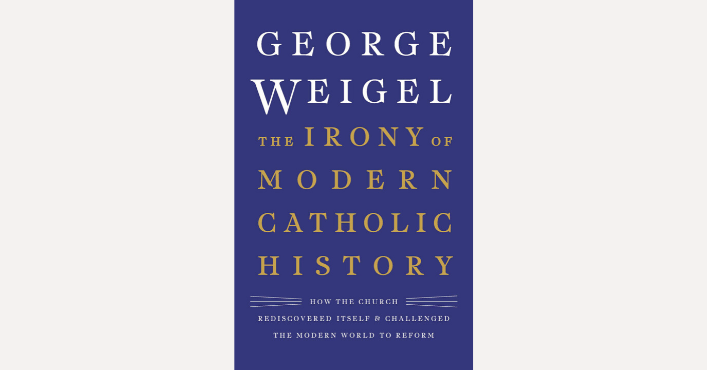 The Irony of Modern Catholic History

A few years ago Philanthropy told the story of Robert Wilson, an atheistic Wall Street financier who never planned to give money to education. Or to the Catholic church. But when Wilson read a fundraising letter touting the low cost per student and superior results of parochial schools, he decided that “seeing these schools disappear would be intolerable.” So he gave the Catholic schools of New York City $22.5 million and created a partnership to help them find additional means of support. It was one of life’s delightful ironies: one of the largest supporters of Catholic schooling didn’t believe in God.

In The Irony of Modern Catholic History, scholar George Weigel dives headlong into many similar paradoxes, tracking how a church resistant to modernity has become integral to the healthy functioning of modern societies. He argues: 1) The Catholic church is an indispensable pillar of civil society; 2) nations rise and fall depending on the strength of their civil societies; and 3) a person doesn’t have to be a believing Catholic to see the value of the church’s teachings and good works. Robert Wilson, case in point.

It took the Catholic church some time to find its place within modern society. In the early nineteenth century, church leaders were obsessed with their eroding political power. In 1870 Pope Pius IX lost all his remaining Papal States territory and was left with only the 110 acres we know as the Vatican. Though Pius couldn’t imagine the church thriving without old-fashioned monarchical power, his successors slowly learned that the church actually gained strength the more she shifted toward explaining her teachings in public dialogue, rather than imposing them as law. Abandoning the distractions of power politics made it easier to focus on the core mission of evangelizing. And it gave the church standing to become an arbiter of struggles between nations and political platforms—as in John Paul II’s eloquent arguments for the superiority of individual liberty to Communist tyranny, which helped bring down the Soviet Empire.

The modern world began with aspirations for a life free of kings and overbearing clergy. By the mid-twentieth century, though, the greatest threats to freedom came not from throne or altar but from newfangled rulers like Mussolini, Hitler, Stalin, and Mao, who claimed to have conquered outdated religions and brought science to bear on politics. As Weigel summarizes, John Paul II’s response was that totalitarian rulers were doomed to fail because they tried to manipulate and even eradicate the “fundamental human associations and mediating institutions of civil society.”

Communism was the extreme case, but less manipulative regimes that still undermined the organic human structures of civil society could also harm citizens. “All modern states,” warns Weigel, have a tendency “to extend the reach of their power.” That’s why John Paul II admonished the “Free World” not to erode the actions of civil society by creating government welfare programs that lead “to a loss of human energies and an inordinate increase of public agencies, which are dominated more by bureaucratic ways of thinking than by concern for serving.” If we want to help our fellow citizens, urged the Pope, we must recognize that “needs are best understood and satisfied by people who are closest to them and who act as neighbors.” This concept of subsidiarity is a brake on government centralization and has deeply shaped American approaches to social problem-solving.

Other Catholic teachings also reinforce individual freedom and independence. It is virtuous habits of mind and heart that make “the machinery of democracy and the free economy work,” as Weigel puts it. These essential personal disciplines, he notes, are formed in civil society and “primordially in the family, which John Paul dubbed the first school of freedom: the community in which little tyrants, small children for whom willfulness is everything, begin to grow into mature men and women who can live in community with those who are different.”

This understanding of freedom’s dependence on vibrant civil society has been underscored by recent history and empirical research. As Ryan Streeter summarized in his Philanthropy review of the new book Alienated America, “when attachment to religious precepts erodes…communities become less healthy, people become unhappier, and economic viability declines.” Two centuries ago, reformers confidently believed that shaking off religious claims would solve all human problems. Today, many citizens doubt the existence of any enduring truth whatsoever, and feel lost in a meaningless universe. Lost people, it turns out, create lost communities.

As pundits and politicians bemoan the weakening of civil society, George Weigel’s book can help us respond. The church is a pillar of civil society, and needs to be braced and maintained. Not just because it supports good works like adoption, hospital care, schooling for the poor, and so forth. But because the central teachings of the church—that humans have a meaningful place and high responsibilities within a loving universe—are an essential component of individual dignity and freedom.