Nowhere is the significance of Shakespeare to America, and of America to Shakespeare’s legacy, more vivid than in the Folger Shakespeare Library in Washington, D.C. Opened in 1932, just down the street from the Capitol and across from the Library of Congress, the library is the heroic product of Henry Folger, a top Standard Oil executive who became a nonpareil collector of Shakespeareana, and his wife, Emily, who was as devoted to the Bard as to her husband. Their story is told in The Millionaire and the Bard by Andrea Mays. 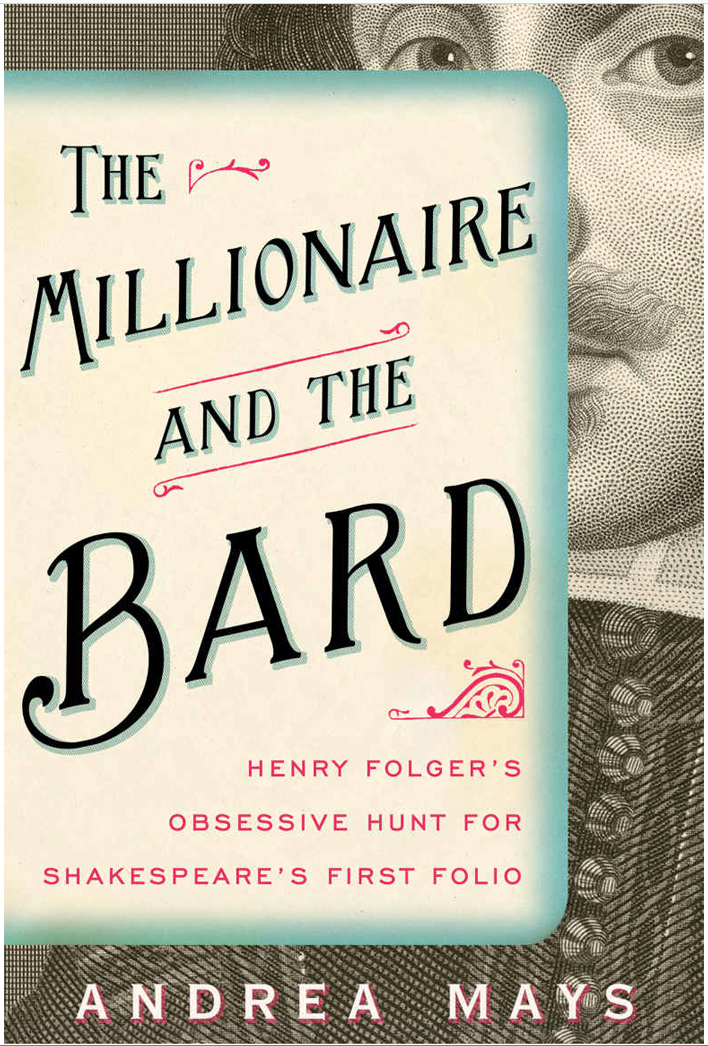 The Millionaire and the Bard: Henry Folger’s Obsessive Hunt for Shakespeare’s First Folio, by Andrea Mays

Mays is the biographer for whom Folger has been waiting nearly a posthumous century. She was inspired by her own reading in Folger’s exceedingly well-supplied library, which she ransacked from end to end, opening “box after box of documents, artifacts, engravings, and books.” Every Shakespeare scholar in the world knows the library, but surprisingly little is known of the man who built it. This ignorance struck Mays as a grave injustice, so she set out to tell the story of Henry Folger. He was an all-American world-beater in his chosen field and dedicated himself to making a fortune sufficient to satisfy a craving no one can really explain. He then amassed a literary trove whose richness thrilled him every day of his life and enabled him to erect a monument worthy of one of history’s greatest writers.

His was “a hoarder’s impulse,” Mays writes, “in search of a grand obsession.” But unlike many American stories of vast fortunes and obsessive consumption, Folger’s impulse to acquire ends happily—and gives us a treasure of texts that might otherwise have been lost.

For Shakespeare’s guiding spirit was essentially entrepreneurial, and the preservation of his plays was not a priority. Mays writes that he “never authorized the publication of any of his plays for two reasons. First, it simply was not the custom. Dramas were meant to be seen, not read. Shakespeare and his fellow playwrights thought of themselves as entertainers, not literary paragons. They did not write for all time, but for their own.”

Moreover, Shakespeare could not have preserved his plays in print even had he wanted to: “playwrights, Shakespeare included, did not own the rights to their plays. The idea of intellectual property was in its infancy in early modern England. For a fee of two to five pounds, a play’s author sold all commercial rights to the theater company that would produce it.” Although, as Mays points out, Shakespeare had a hand in several of the moneymaking aspects of theater life, he was not entitled to publish his own work.

Where modern bibliophilia has “fetishized an author’s original manuscripts,” in Shakespeare’s time the so-called foul papers were worth literally no more than the paper they were written on. Paper was hard to come by, and an autographed version of a timeless play might be recycled for just about any purpose. “Centuries ago, the pages of a disbound copy of the First Folio were once used in Spain to wrap fish,” Mays notes. Today, collectors fantasize about the marvels that could be concealed where no one has ever thought to look. “A single page written in Shakespeare’s hand might now fetch several million dollars,” she writes.

But Henry Folger did not dream of unearthing such a rarity; he went after the prizes he knew were available, and he was unrelenting in his pursuit, especially of copies of the First Folio of 1623. This was the first edition of Shakespeare’s collected plays, comprising 36 works, all the extant plays but Pericles. Previously, his plays had been printed just one play per volume, not made for looks, nor made to last. The folio, on the other hand, was an exemplar of publishing elegance and durability.

The First Folio was the brainchild of two shareholders in the leading actors’ troupe of the day, who had known the rarest vocational intimacy with Shakespeare, having acted in his plays under his instruction. These men cherished the memory of their colleague, who had died in 1616 at the age of 52, and they were determined to make his name triumph over the ravages of time. Their monumental task involved tracking down the several available versions of each play, from whatever odds and ends they could find of the original manuscripts. These odds and ends often presented an unintelligible thicket, and were justly called the foul papers. The scribe’s more readable handiwork, known as the fair copy, was often covered with a director’s chicken scratches. The actors’ copies contained full lines only for each particular character, to prevent opportunists from selling the entire script to another company. Most of these sources for the First Folio have disappeared.

Folger acquired 82 copies of the First Folio, each singular in some respect. He scooped up 1,400 copies of the Bard’s collected works in 9,700 volumes. On both fronts the Folger Library outpaced every other library in the world. Folger took a particular pleasure in acquiring volumes that had been owned by literary and political eminences like Samuel Johnson, David Garrick, King George III, Queen Victoria, John Dryden, Sir Walter Scott, Percy Shelley, Samuel Coleridge, Walt Whitman, Edwin Booth, George Washington, John Adams, and Abraham Lincoln. He prided himself in his comprehensive knowledge of Shakespeareana. He once decided not to go through with the purchase of a volume supposedly owned by Lincoln, because when he perused the pages of Macbeth, the play that Lincoln is known to have returned to again and again, they were evidently untouched.

Francis Bacon earned a niche all his own, though Folger did not share the renegade belief that Bacon was the real Shakespeare. Books known to have been sources for Shakespeare were also collected. No fewer than 5,000 volumes were seized upon for their allusions to Shakespeare or his work. Prompt books owned by celebrated actors and some 250,000 playbills filled the vaults. A gifted amateur singer and organist, Folger gathered 1,000 volumes on Shakespeare and music, and he even extended the collection to period musical instruments.

The money to underwrite this vast project came from Henry Folger’s work as John Rockefeller’s right-hand man. He worked demonically hard to learn arcana of paraffin wax, kerosene refining, and petroleum greases, and rose impressively fast. After Standard Oil was cut up into pieces, Henry Folger became president of the Standard Oil Company of New York in 1911, owning shares worth some $400 million in current dollars. Erasmus said, “When I have some money, I buy books; and if I have any left, I buy food.” Henry Folger had money for books and food alike. When he retired in 1928 he devoted himself to creating a library worthy to display them.

“A man like Henry Folger was more than a serious collector. He lived through his collection,” Mays writes. He dickered and haggled and sized up the vulnerabilities of potential sellers as a general in the field takes the measure of the enemy. Deploying his shrewdest business wiles, he gathered up a treasure meant to outlast him forever, his true life’s work.

Joseph Adams, the first director of research at the Folger Shakespeare Library, spoke at its opening in 1932. In the “city of monuments” that Washington, D.C., had become, he said, three stood out “in size, dignity and beauty, conspicuous above the rest: the memorials to Washington, Lincoln, and Shakespeare.”  These men are “the three great personal forces that have molded the political, the spiritual, and the intellectual life of our nation.”

Henry Folger did not live to see this opening. But his legacy, the Folger Shakespeare Library, continues to stand, a haven for those who appreciate human excellence. One hopes that the names of Henry and Emily Folger will be remembered along with that of William Shakespeare.

Algis Valiunas is a literary journalist and a fellow at the Ethics and Public Policy Center.