New Bronx School Teaching Students Their Futures Are in Their Control

Philanthropy Roundtable’s Values-Based Giving Program connects our donor community to high-impact organizations that advance our shared values of liberty, opportunity and personal responsibility. This story is part of our campaign highlighting how donors and nonprofits work together to improve lives. Interested in learning more about Values-Based Giving and the services our team provides? Click here.

Most mornings, the 108 ninth graders walking into Vertex Partnership Academies Charter School in the Soundview section of the Bronx, in New York City, are met at the sidewalk by the school’s principal, Joyanet Mangual, greeting each one of them as an individual.

The day I visited in early December 2022, Mangual was home tending to a sick child, so the morning individual greeting job belonged to Eddie Sparkman, a founder of the school, its dean of culture and its basketball coach.

Sparkman began his career in education by working as a temporary office manager at another charter school in the South Bronx, Boys Prep, then as a classroom aide there, while also managing a Foot Locker sneaker store. Last year, he earned his college diploma from Lehman College. Now he’s working on a master’s degree.

“Where’s your uniform?” Sparkman asks one student. He asks another where he’d been on Sunday afternoon.

“I let them know every day the opportunity they have: do not waste this opportunity!” Sparkman explains later.

Past the front door, I make my way up a set of stairs. The risers are emblazoned with the school’s core values — “courage, justice, temperance, wisdom” — and the other concepts and skills its founders hope to cultivate in students: “thinkers, communicators, principled, open-minded, caring, balanced, respect.”

I find myself in a school office. The quarter sawn oak built-in cabinet doors are a clue the school building has been there for a long time, even though it is this particular school’s first year in operation.

The chief executive officer of Vertex Partnership Academies, Ian Rowe, discusses the building’s history: It was a Catholic school where Sonia Sotomayor, now a Supreme Court justice, was once the valedictorian, but it was closed amid a nationwide decline in Catholic school enrollment. It had been vacant since 2013. “We have resurrected it,” Rowe says. While this school is nonsectarian, it pays rent to the Blessed Sacrament church that still operates on the site.

Rowe also explains the unforgiving math of startup charter-school finance. Eventually, when a school is at full capacity, its fixed and variable costs are covered by per-student money from the government. Even then, the funding for charter school students in New York City only amounts to about 70% of what students in traditional district-run schools get. When a school is in its startup phase, as Vertex has been and still is, the per-student government money is either nonexistent or just ramping up. A school like this one, which will eventually have grades nine through 12, opens in year one with only grade nine. Even Vertex’s ninth grade is smaller than it might have been if the school’s opening hadn’t been cast into doubt by a teachers union-backed lawsuit. The suit was argued (Kirkland and Ellis partner Jay Lefkowitz defended Vertex, pro bono) and decided in Vertex’s favor less than 10 days before the school was scheduled to open.

During these initial years, philanthropy enables the school to meet its payroll. It’s help that Rowe calls “Aid Us,” an acronym for “approved interim deficit until self-sustainability.”

At this point in the morning, Mangual rings in from home to join the conversation via Rowe’s cellphone.

She was born and raised in Chicago, a psychology major at the University of Illinois, a Teach for America special education teacher at a Brooklyn public school, then stints at schools affiliated with the Noble and Democracy Prep charter school networks.

“It’s been a roller coaster of a ride to be part of founding a school,” she says, describing the adjustments the school has made in its first few months to respond to student needs. Class periods were shortened to 70 minutes from an initial 90, leaving room to add a “WIN” block (for “what I need”) that allows students to take electives or receive tutoring during the school day. The policy on student cellphones was changed to reduce distraction — Sparkman is now collecting them from students at the door, placing them in a padded case kept in the school office.

I ask Mangual why she’s doing this sort of work. She says her father came to America from Guatemala with a formal education that ended at sixth grade. “Even his writing in Spanish was poor.” One winter day in Chicago, her father asked her to go around downtown with him and help him fill out job applications — hotel housekeeper, restaurant kitchen staff. Her father told her, “You need to finish school.”

“I see myself in our kids every single day,” she says, “I just hope to make a difference in each of their lives.”

I’d heard Mangual tell the story already once before in a YouTube video and read it before in a Wall Street Journal editorial page interview. But hearing the story from her firsthand was moving.

The story Mangual personally exemplifies — American opportunity and upward mobility through education — is one Rowe says the school tries to teach its students. “What’s the culture of the school? What’s the mindset?” he asks. One might look around and see “low-income Black and brown kids, going to be facing systems of incredible oppression.” Or one can look around, instead, and see “individuals with promise and agency.”

A “Pathways to Power” class taught by Mangual and others tells students about “The 7 Habits of Highly Effective Teens,” financial literacy, time management, résumé writing and relationship skills. It also describes the likely rewards of following the “success sequence” — graduating high school, getting a job and getting married, before having children.

Rowe says when he started teaching that success sequence at the charter network of which he was CEO before leaving to start Vertex, he got “huge pushback” from staff who said “We can’t do this. We might be insulting parents.” Actually, Rowe said, what he heard from parents was, “Thank God someone is teaching this.”

Though Vertex is just months old, and though education outcomes such as employment or college completion take a notoriously long time to measure, students and parents here seem similarly pleased so far.

Kaylei Smith, 14, who lives in the Bronx and hopes to be a doctor or a veterinarian, said she felt like the school was listening to her and helping her achieve her goals. “The first week I came here, they were asking us a lot of questions about what we want to do,” Kaylei says. She says the Pathways to Power class helped her learn “how to think about the decisions that we make, because it will affect us in the future.”

Yahaira Lois, a parent who came to America from the Dominican Republic, says her daughter “likes the challenge” at the school, and was attracted by the opportunity the school’s International Baccalaureate program opened up to go to universities in different countries.

Philanthropists also have been liking the concept. One donor who is involved with the school, Sarah Hawkins, says she was attracted to Vertex because of Rowe’s “values-based approach to education,” which she calls “principled in terms of morality and meritocracy.” Hawkins works managing the eastern U.S. region of a global real estate company, and says her company might eventually put Vertex graduates or career-track students to work in fields like building engineering or construction.

The co-chairman of the William E. Simon Foundation, J. Peter Simon, says the foundation’s support of the school stemmed from its beliefs about the purpose of education, which aligned with Rowe’s vision of an International Baccalaureate high school that incorporates lifelong goal planning. “The mission of a school is not only to foster the academic prowess of its students, but also to foster character and good citizenship,” Simon says. The foundation’s gift was targeted at community service programs and at health and wellness programs, which Simon calls “two crucial elements of a well-rounded person.”

Rowe says the support from philanthropists is essential to the school’s operations, both financially and in other ways.

“The money is really critical,” Rowe says, but he also mentions how the networks philanthropists are in can work to the school’s benefit in career apprenticeships and other ways. “Suddenly, your philanthropic partnerships start to translate into other areas that can benefit the school.”

Vertex Partnership Academies is innovating in education in several significant ways. By partnering with two other K-8 charter school networks, Brilla and Public Prep, and serving as their high school, it’s helping to create a way around the New York state law capping the number of charter schools, which has constrained growth in the sector. By offering an International Baccalaureate careers pathway as well as an IB diploma pathway, it’s challenging the “college for all mentality” Rowe says he has come to question. Instead, apprenticeships and partnerships with employers could lead some students into good-paying jobs directly after high school graduation.

The most disruptive thing of all about Vertex, though, may be the message it’s giving its students. There is “unbelievable opportunity in America,” Rowe says. “The question is, are you prepared for it?”

Rowe says he’s sometimes accused of denying the reality of systemic racism. “Systemic racism, structural racism, institutional racism — if you’re going to talk about those three kinds of racism, then let’s talk about a fourth kind: surmountable racism,” he says.

He denounces educators trying to convince 12-year-olds that there are all those powerful forces arrayed against them.

“You’ve just got to fight back against all that nonsense. I just reject it,” he says. “There are no victims in our schools. There are only architects of their own lives.”

Ira Stoll is managing editor of Education Next and editor of FutureOfCapitalism.com.

To learn more about Vertex Partnership Academies, read their profile in the Roundtable’s Opportunity Playbook.

Support Nonprofits That Reflect Your Values

Interested in connecting with Vertex Partnership Academies or learning more about Values-Based Giving? Our Programs team is here to help. 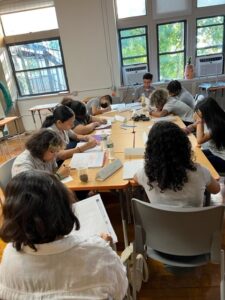