The Election and Implications for the Pro-Freedom Agenda

Last week, I hosted what turned out to be a pleasantly optimistic conversation about the election and what the outcomes mean for those who want to pursue pro-liberty policies. I was joined by my Roundtable colleague Christie Herrera; the president and CEO of the American Legislative Exchange Council, Lisa Nelson; and the president and CEO of the State Policy Network, Tracie Sharp.

Why the optimism? Even though the election results indicate a divided nation, there appears to be an opportunity to focus on important issues, such as health care and criminal justice reform, and to make real progress in advancing liberty, opportunity, and personal responsibility. Lisa Nelson shared this map of how the results have played out at the state level. This makes it easier to see that we have clarity as to which party is in power, making it easier to plan and pursue a cohesive agenda. 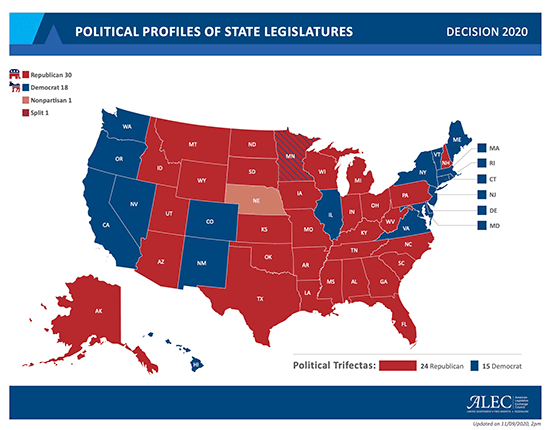 After the event, Sharp summarized some of the other reasons to feel encouraged:

“The concerns of 2020 may not have translated into landslide election victories or down-ballot waves, but Americans’ voting decisions can tell us plenty about the problems people face and the opportunities for a better path forward,” she said. For example:

At the same time, our panelists raised some very legitimate reasons why pro-freedom advocates should not become complacent, such as potential incursions on philanthropic freedom, as Herrera nicely outlined. Our website has plenty of information on that front. In spite of these kinds of issues, they nevertheless found plenty of other reasons to be optimistic, suggesting that the nation may not be so divided as it may seem. If, in fact, this is the case, that is very welcome news indeed.