The charity that shifted evangelical eyes, and dollars, overseas 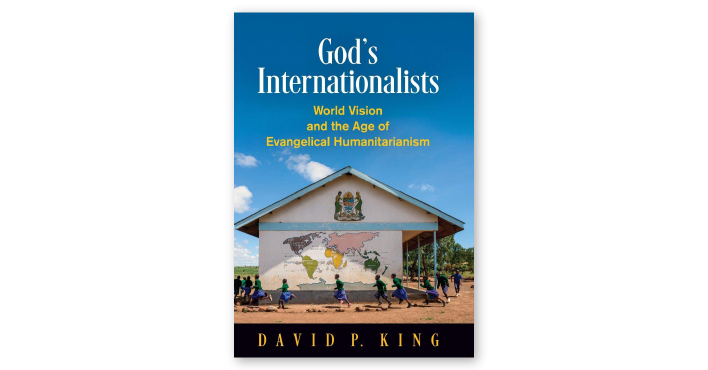 God’s Internationalists: World Vision and the Age of Evangelical Humanitarianism

In 1947 a young and ambitious American evangelist in China was confronted by another missionary about the fate of a young convert who had responded to the evangelist’s message, and then been summarily beaten and abandoned by her family. With one more waif to care for now, Tena Hoelkeboer demanded of Bob Pierce, “What are you going to do about it?” Pierce was struck dumb. Not knowing how to respond, he gave Hoelkeboer all the money he had left, five dollars, and promised to send more each month on his return to the States.

He kept his promise. Not only that, but that question changed him forever. Pierce, as his daughter wrote years later, “went to China a young man in search of adventure, but came home a man with a mission.” Today, the humanitarian mission he founded, World Vision International, is the largest Christian humanitarian organization in the world. It works in nearly one hundred countries, through 42,000 employees, and has an annual budget of over $2 billion. How this powerful charity grew out of that one encounter in China is the subject of David King’s book God ’s Internationalists.

For the 25 years following his Chinese experience, Pierce was a dervish working to bring the needs of orphans to the attention of American evangelicals. One tack was to pitch the work as an antidote to communism. Using the developing technologies of film, radio, television, and direct mail, he melded evangelical humanitarianism with American national interests.

Pierce convinced American evangelicals to offer aid to suffering Asians, King notes, without getting snarled up in old arguments “between evangelism and social action that had ripped apart the Protestant missionary enterprise” in the past. This ability to mobilize compassionate action without disputes “was no small achievement.”

Pierce turned everything into an emergency, and despised institutional bureaucracy. “He thrived on constant change…. He would take on additional commitments and programs whenever he felt he could make a difference, and World Vision’s managers were often left to piece together how to resource Pierce’s constant expansion.” It was during this time of explosive growth that child sponsorships became the artesian well of funding. “Child sponsorship quickly became the backbone of World Vision’s financial success. World Vision did not depend on denominational or even local church partnerships. Pierce spoke directly to the donor.”

As the complexity of the organization multiplied, the “founder’s trap” caught up with it. So long dependent on the identity and sheer force of personality of Pierce, his limitations eventually sparked an internal crisis at World Vision. The organization desperately needed structure, focus, and management, without loss of its very personal vision. It struggled to balance religious mission with physical relief. The board forced Pierce’s departure, and Stan Mooneyham was charged with preserving the charity’s compelling energy and original vision while undergirding it with management cohesion.

Under Mooneyham, World Vision evolved from crisis response to longer- term cultural development. Local leaders were given control in each country. Experts in economics and medicine and other specialties were added to the staff. Government funds were accepted, and partnerships with secular organizations increased. In 2018 the organization reported over $1 billion in grants and contributions, $329 million of which came from the government.

This shift made people nervous. “Some saw it as an expansion of evangelical influence into new spheres. Others worried that World Vision was leaving its evangelical heritage behind.” Gradually, support built for an evangelical humanitarianism with a professional sheen. By the 1980s, six of the seven largest evangelical overseas-mission groups were relief and development organizations in the World Vision style.

Many religious Americans today are turning more of their gaze abroad. Pierce and World Vision greatly accelerated that. For the future, King guesses that “as more American Christians embrace a global vision, perhaps a new form of practical ecumenism may…transcend… past theological and political boundary markers.” When he gave his last five dollars to Tena Hoelkeboer, Bob Pierce set a big ball rolling.

Fred Smith is founder of the Gathering.