Ask them to stop wasting resources and become more efficient.

To begin, the faculty at U.S. universities have light workloads—especially compared to other Americans, but also versus previous generations of academics. These days, a typical professor is in class about one-third fewer hours than a 1965 counterpart would have been. Senior faculty at prestigious research institutions now often only teach one course per semester.

Why the reduction? Supposedly because the professors are doing more “research.” Yet much university research is now published in obscure journals or books that hardly anybody reads or cites. Most academic publishing today is not a means of extending the frontiers of useful knowledge, but merely a mechanism of the tenure system for entrenching the job security of faculty members.

Workloads have fallen sharply for students as well. Researchers Philip Babcock and Mindy Marks have shown that in 1960 the typical student spent about 40 hours per week in class, studying, writing papers, or completing other work. Today that total has fallen to around 27 hours. Students now spend more time on recreation and partying than on academics, government time-use surveys show.

With most students attending school for 32 weeks annually, today’s average college kid devotes under 900 hours per year to academics. That’s less time than middle-school students put in. It’s roughly half as long as parents labor in a given year to pay tuition.

Many students have concluded there’s no reason for them to work harder. With grade inflation, few are now given grades below “B.” It has become common for half or more of all seniors to be awarded “honors”—at a place like Johns Hopkins fully 59 percent are given that gold star.

Another egregious problem on campuses is administrative bloat. There has been an explosion in non-teaching staff: diversity promoters, counselors, people to run environmental initiatives, social-activity coordinators, media handlers, marketing staff. At many universities, there are now more administrators than faculty—in marked contrast to when I started my career. If the professor-to-administrator ratio were simply made the same today as it was in the mid-1970s, tuition at my employer (Ohio University) could be reduced around 20 percent.

Buildings are another source of waste. The use of a typical academic building is far lower than a comparable commercially owned facility. Classrooms and faculty offices are rarely occupied in June, July, most of August, and large parts of May and December. They are generally deserted on weekends. They are empty late in the day. They are not used on Fridays.

Yet recent years have brought a soaring “edifice complex” on many campuses. New buildings are everywhere. And they are often given elaborate atriums, large public areas, expensive media rooms, and other elements that do little to advance learning or research. Many universities are notoriously bad about maintaining these facilities once constructed.

Donors steer vast sums annually to colleges and universities—$47 billion in 2018. That total is five times higher than the level of 30 years ago. (And it’s on top of more than $150 billion of annual government spending to support higher ed.) Yet college administrators are rarely asked to account for their spending, or even asked questions about today’s serious underutilization of resources.

Donors need to confront those soliciting their funds. Just over the last ten years, college tuition and fees jumped up 44 percent at private four-year institutions, while CPI inflation rose only 20 percent. No sector can outstrip inflation 2.2 times over for very long without bankrupting somebody.

A few sterling examples show there is nothing inevitable about runaway college costs. Purdue president Mitch Daniels recently announced that his university would once again keep its tuition frozen for the coming academic season. That marks the eighth year in a row with zero tuition increase at the university. Yet during that same period Purdue’s academic reputation and success at attracting excellent students have soared. 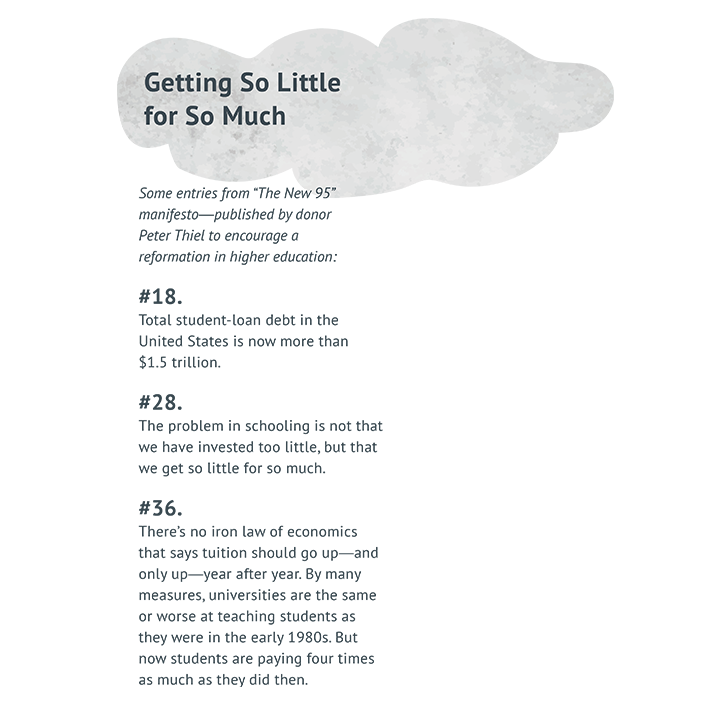 Ask the colleges who are soliciting your funds exactly how their administrative staff have grown. Exactly what level of weekly use do their buildings get? Find out what their normal faculty teaching load is. What is the overall grade-point average given to their students? How many of their students complete all of the courses they start? How many graduate on time? How many of their undergrads pursue rigorous degrees like engineering? What salaries do their graduates command on average? How do organizations like U.S. News or Forbes grade changes in their academics over the past decade?

Universities do some valuable things, and can be very worthy of philanthropic support. But give intelligently. And be cautious. The typical university is quite wasteful—and even less productive than it was 50 years ago.