A furtive rendezvous in an out-of-the-way park. An urgent, edgy conversation in sotto voce, suspended when footsteps draw near and resumed only when no interloper can overhear. This could be a le Carré plot point. Instead it is a meeting of conservative professors on campus.

American universities like to think of themselves as bastions of open inquiry and free speech. In truth, they are among the most politically homogeneous and ideologically intolerant locales in America. Conservative professors—especially young, untenured ones—must hide their political identities if they are to succeed at American universities, report Jon Shields and Joshua Dunn in their new book Passing on the Right. 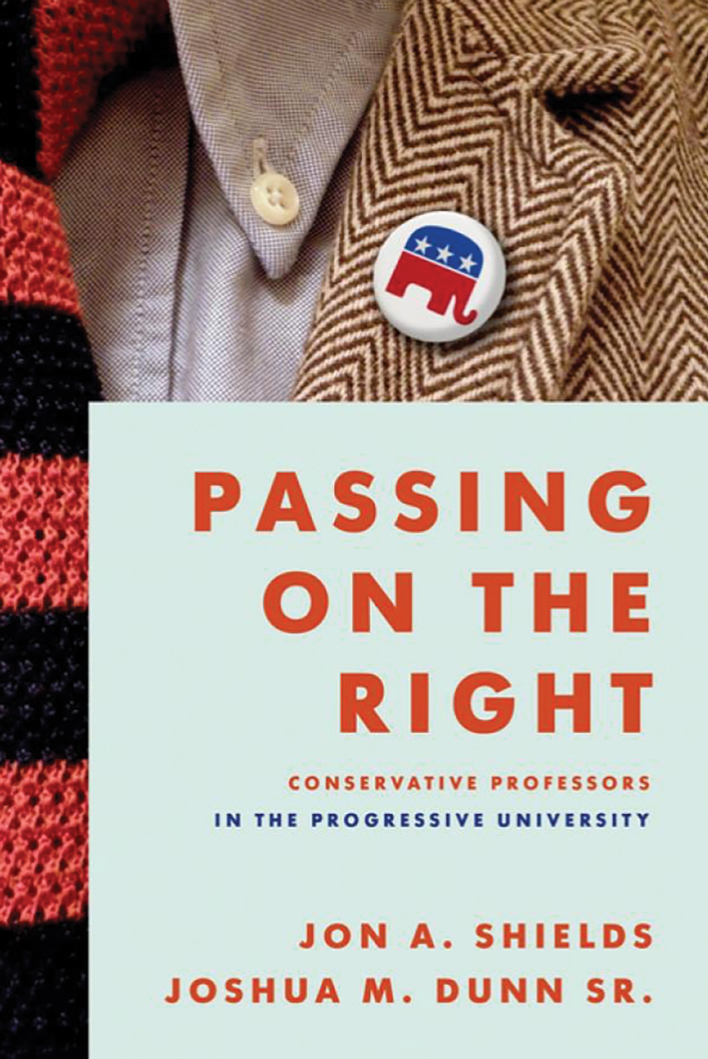 It is well known that conservatives are scarce on college faculties—most studies put their percentage in the humanities and social science faculties at below 10 percent. In a democracy where nearly 40 percent of the population describes itself as conservative, this imbalance among the professoriate is striking. It would be less problematic if it were the consequence of young conservatives not wanting to be tweedy professors. But Shields and Dunn marshal impressive evidence that the source of the imbalance is pervasive bias.

Shields is an associate professor of government at Claremont McKenna College; Dunn is an associate professor of political science at the University of Colorado Colorado Springs. Through interviews with 153 conservative professors in the humanities and social sciences at 84 colleges and universities, they document many obstacles placed to block conservative faculty. Their study shows that conservatives end up at less prestigious universities than progressives with similar résumés. Professors told the authors that being a conservative was a mark against a candidate when peers review articles for publication or decide whether to award tenure. Certain fields of study such as American history, said their informants, are “no-go zones” where hostility to conservative interpretations will kill the career of anyone with such views.

To contend with left-wing biases on campus, Shields and Dunn report, conservatives who aspire to be professors attempt coping strategies. Some remain closet conservatives and try to “pass” as progressives. This has become almost the norm among younger professors. A few candidates openly display their conservative colors, but generally pay a price for their brazenness. Some of these open conservatives face stiff challenges in bids for promotion. Some are paid less than colleagues, receive fewer grants, and get thinner opportunities. One professor who defended the war on terror after 9/11 described having to pull his children out of his town’s public schools to protect them from hostility.

Amid the evidence they collect about how conservatives are increasingly shut out on campus, it comes as a surprise that later in the book Shields and Dunn conclude optimistically that “the right-wing critique of the university is overdrawn.” They point out that many conservatives do succeed in academic careers, and some conservatives even said the fact that they knew their work would receive extra scrutiny drove them to be even more scrupulous.

But if it were shown that being a woman or member of a racial or ethnic minority is a mark against a job candidate, or that members of a minority group are less likely to have their articles published, or that they are placed at less prestigious institutions than merited by their professional accomplishments, there would be appropriate outrage. There would be a national commission and universitywide study groups and marching on campuses.

The underrepresentation of conservatives on campus should be cause for concern. While unfair treatment of a few thousand conservative scholars is regrettable, the greatest cost of this campus bias is failure to expose the 20 million students enrolled in college today to alternative viewpoints and a competitive array of intellectual explanations for the unfolding of events. Perhaps one reason that Shields and Dunn underplay the consequences of the problem they help document is their understanding of conservatism as a negative tradition, a “coalition against liberalism,” rather than a rich and varied positive tradition that has profoundly shaped American civic life.

The American conservative intellectual tradition encompasses decentralists, traditionalists, constitutionalists, libertarians, neoconservatives, and more. These strands of thought have continuing relevance to today’s most urgent questions on every topic from national policy to personal happiness. If one goal of a college education is to prepare students for engaged citizenship, surely exposure to professors representing the American conservative tradition must be part of any real understanding and lasting intellectual problem-solving. Tolerating more such views on campuses would bolster that professed top goal of so many college leaders today, “diversity.”

Even if conservatism is merely a tradition of opposition, college students should be exposed to arguments that counter popular and conventional views. As John Stuart Mill argued in his classic defense of freedom of speech, “He who knows only his own side of the case, knows little of that.” To fully understand counter arguments to your own position, Mill notes, you must hear “from persons who actually believe them; who defend them in earnest.” Even if we grant Shields and Dunn their premise that progressive professors do not set out to indoctrinate students but just present the world as they see it, adding conservatives to the mix would make for yeastier study and better understanding.

President Obama has expressed concern about colleges “where they don’t want to have a guest speaker who is too conservative,” and worried aloud that students are “coddled and protected from different points of view.” Amidst frequent student calls for “safe spaces” on campuses and “trigger warnings” against readings that might offend, disinvitations of non-left speakers, and violent protests against spoken “microaggressions,” there can be no doubt that restoring a free exchange of ideas is one of today’s greatest challenges on college campuses.

Relying on colleges and universities to recognize their own blind spots and reverse their own biases is not likely to bring much change. Donors, however, might be able to spark bits of healthy change. Over the past two decades philanthropists have made headway in improving the teaching of classic literature, liberty-based politics, American constitutionalism, religion, and market economics. Special donor-funded programs are found at colleges large and small, public and private—including the James Madison Program at Princeton University, the Institute for the Study of Western Civilization at Texas Tech University, and the Alexander Hamilton Institute that serves Hamilton College students. These philanthropic initiatives have institutionalized small footholds for intellectual traditions other than the dominant liberal approaches, and opened opportunities for including conservative faculty and students in the mix of campus learning. There is room for much more to be done.

If young people don’t learn to respect a wide range of views while they are students, and learn from conservative as well as liberal wisdoms, there is reason to be concerned about the future of our republic. The timely documentation of bias against conservative scholars and ideas put together by Shields and Dunn is a public service to any American thinker who believes that the free exchange of truly different ideas is central to understanding and progress.

Jacqueline Pfeffer Merrill is a contributor to PhilanthropyDaily.com and a former college professor.