The NEA and NEH have minimal roles in U.S. arts and letters.

In September 1965, when establishment of the National Foundation on the Arts and Humanities was under debate, a Democratic congressman lamented that the U.S. was “the last civilized nation on the earth to recognize that the arts and the humanities have a place in our national life.” The true facts were different. Our nation had established thousands of symphonies, dance troupes, and performance festivals; imported millions of pieces of art; established museums, libraries, and cultural events; funded publishing projects to make the classics more accessible; and founded renowned programs for training indigenous artists and studying creative processes. American art and literature zoomed from nonexistence to world leadership in less time than it took to build Notre Dame Cathedral. Private citizens, support associations, and donors had—and continue to possess—a tremendously successful record of elevating the arts and humanities in American life. What set some critics bellowing was simply that the federal government didn’t pour public dollars into the field, as in Europe.

The evolution of this argument is catalogued by James Bennett in Subsidizing Culture: Taxpayer Enrichment of the Creative Classes. He shows that by the mid-1960s, the idea that the federal government should sponsor cultural achievement gained enough momentum to create apparently permanent public underwriting. The National Endowments for the Arts and Humanities would have many positive effects for society, but they set up new expectations about who should support art, and what audiences art should address—shifting some of the funding burden from private and specialized entities to taxpayers, and reducing market tests that required artists to win supporters who admired their work enough to pay for it. 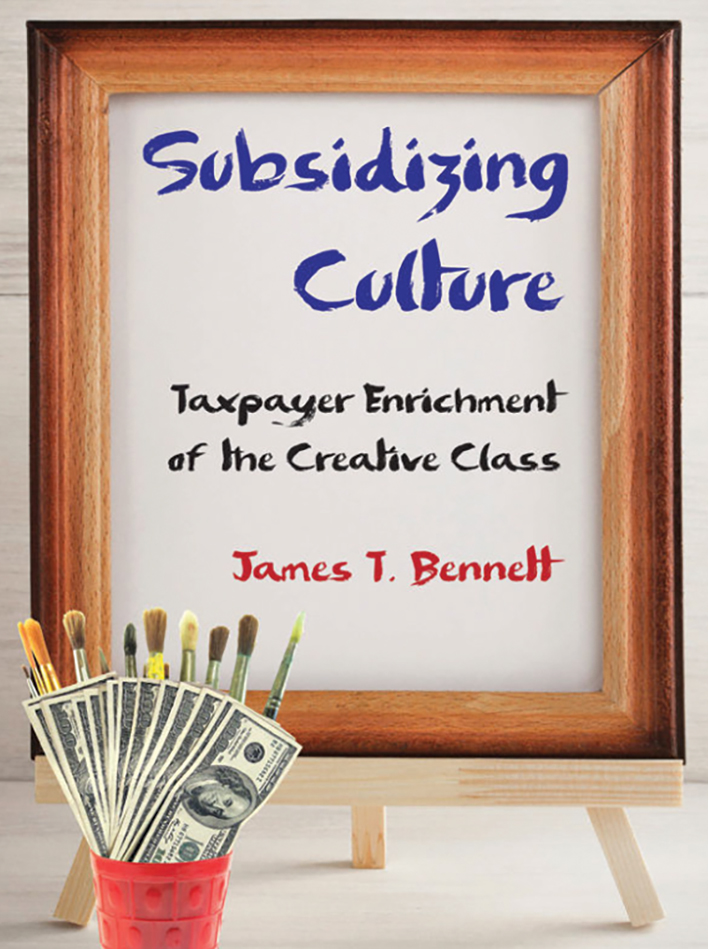 Not every artist embraced this shift. Bennett describes “Beat poets, agrarian novelists, anarchist artists, upper-crust patrons of symphony orchestras, and just plain old ordinary painters and fiddlers and story-tellers” who opposed government subsidization. They raised concerns over the quality of public-funded art, over the effects of government preferences for particular styles or ideologies, and over the potentially totalitarian tinge that state influence over high culture could create. But this cacophony of anti-subsidy voices had no particular unity of philosophy or consistent driving principle, and so was pushed aside.

Bennett examines government efforts through the decades. The Public Works of Art Project was an early New Deal program that aimed at “putting artists to work” and promised to avoid “trying to make artists out of bums.” It was our first large-scale government-funded art program. It functioned largely without controversy, aside from the temporary adornment of San Francisco’s Coit Tower with a hammer and sickle.

The programs that followed were less humble. The director of the Federal Theatre Project, for instance, proclaimed her work “a new frontier in America, a frontier against disease, dirt, poverty, illiteracy, unemployment, despair, and at the same time against selfishness, special privilege, and social apathy.” When complaints arose that many of the shows sponsored by the project contained blatant propaganda, the defense offered was that democracy and clean water were worthy subjects.

As the Cold War developed, government money was put into sponsorship of cultural organizations, art exhibitions, and literary magazines to extol Western values and challenge communism—usually secretly. Thomas Braden, head of the CIA’s International Organizations Division, explained that the projects he funded “would have been turned down if it had been put to a vote in a democracy. In order to encourage openness we had to be secret.” When the New York Times and others made these activities known, Brandeis sociologist Lewis Coser spoke for many when he wondered aloud at “the unedifying spectacle of American intellectuals waxing indignant about the kept intellectuals of the Soviet Union while being subsidized by secret or not so secret American government funds.”

But as the federal government grew rapidly during the 1960s John Kennedy decided it was “important for the President of the United States to lend his prestige to distinction of creation and performance,” as Arthur Schlesinger awkwardly put it. The Johnson administration, too, stated a desire to “throw its prestige behind the recognition and encouragement of an elite of talent in the United States.” And so the footprint of government in the arts grew.

In 2015, $1.3 billion was set aside by federal, state, and local governments for the arts. Yet that same year, private entities donated $17 billion to the arts—13 times more than all levels of U.S. government appropriated. Kickstarter alone (which, being a business, doesn’t appear in the charitable numbers) surpassed the NEA in 2012 with the amount it disburses to creators.

Even advocates of government funding of the arts concede that private giving is the lifeblood of American culture. “The primacy of private, as opposed to public, support for the arts and culture in the U.S. largely relates to American social and cultural traditions,” explained a 2012 NEA publication rather wistfully.

The normalization of federal subsidies for the arts and humanities is not a trivial thing. But government is only a minor influence in the field, and if government funding of artists and intellectuals should reverse, no calamity will result. “The cause of death” for public arts funding would be, says Bennett, “irrelevance instead of irreverence.”

Monica Klem was a contributor to The Almanac of American Philanthropy.