Gifts from the Grave

Many people have daydreamed about receiving a letter one day from a lawyer informing them that they are the heir of some distant relative they’d never heard of. Suddenly they are rich. It’s almost a staple of Dickens. And it happens a lot in other fiction.

The 1932 movie comedy If I Had a Million was about a rich man who, just for the fun of it, gave $1 million to each of eight people he picked at random out of the phone book. (The first name he picked was John D. Rockefeller, so he tried again.) One recipient was a prostitute. On receiving the money she checked into the most expensive hotel in town and went to bed, alone.

“The Millionaire,” which ran on television from 1955 to 1960 and for decades in syndication, had a vastly wealthy character giving a million dollars to people he carefully selected. Each week, viewers got a tale of what happened to the recipient. Sometimes the results were happy, sometimes not.

In real life, such twists are rare. There really are detective firms, however, that specialize in finding missing legal heirs, and then taking a percentage of their inheritance in return for connecting them to the estate. And sometimes surprise legacies involve more than wealth. In 1987, Richard Wortley, a construction foreman in Portland, Maine, learned that with the death of his second cousin once removed in England, he had become the fifth Earl of Wharncliffe, Viscount Carleton and Baron Wharncliffe. The fourth earl’s considerable estates in Yorkshire, however, went to his daughter.

When British eccentric James Camden Neild died in 1852, he left almost his entire estate of £500,000—a vast sum in the middle of the nineteenth century—to Queen Victoria. This unexpected legacy allowed the royal family to buy the Balmoral estate in Scotland. The Queen also kindly used a part of the inheritance to increase what Neild had left to his executors, and to provide for his servants, whom Neild had ignored in his will.

When American Sylvia Green Wilks died in 1951, she left an estate of $95 million. In today’s money, that’s equal to about $950 million. She was the daughter of Hetty Green, known, somewhat unfairly, as “the Wicked Witch of Wall Street.”

Hetty Green was that psychological rarity, a genuine miser. Spending more money than absolutely necessary caused her great psychic pain. She once spent most of a night ransacking a carriage, looking for a 2-cent stamp that had fallen off a letter she intended to mail.

Hetty Green was also a born investor, indeed the Warren Buffett of her era. Born affluent, she took her inheritance and used it to build one of the great Gilded Age fortunes, the only one created by a woman. When she died, she left not one dime to charity and made sure that her children’s legacies were safe from gold-diggers and other threats. The charity she performed in her lifetime (biographical sleuths have uncovered a significant amount) was entirely anonymous.

Her daughter Sylvia, who had no children, pursued a different but also unusual charitable strategy. When she died at 80, she left her huge estate to no fewer than 119 recipients. Some were relatives. Three were universities that expected bequests. But many of the recipients were completely surprised, having had little to no contact with Wilks in the past.

For instance, a check for $10,000, entirely unexpected, went to Robert Moses, the parks commissioner of New York City. He endorsed it over to a charity.

The Free Public Library of New Bedford, Massachusetts (the town where Hetty Green was born and grew up), was shocked to receive $1.2 million. The trustees, according to the New Bedford Standard-Times, were faced with “an embarrassment of riches.” The New Bedford government, however, took care of that problem—the city council cut the library’s budget appropriation to zero.

Another check from the Wilks estate went to Josephine Grinnell Smith, a distant cousin of Sylvia. In a lifetime of overspending, Smith had run through two fortunes, and was living in one room of a dilapidated mansion when she received $100,000. True to form, she ran through that money too, and died penniless five years later.

Some longtime employees of Wilks who had rarely seen or talked to her got benefactions. A gardener and an accountant, for instance, received $34,000 and $35,000 respectively. That became their unanticipated retirement income. 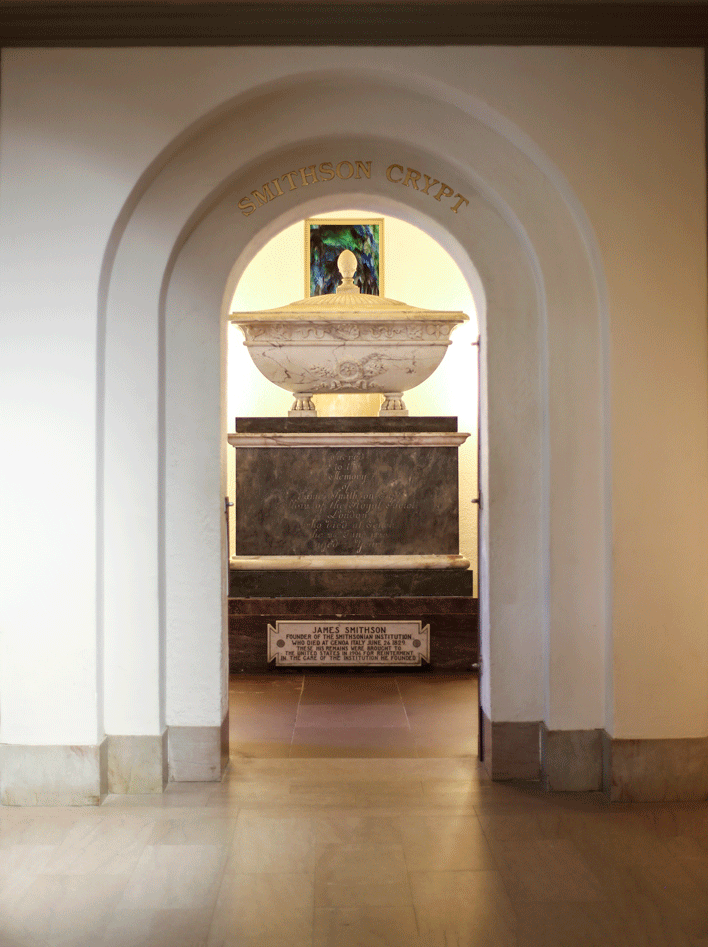 James Smithson never walked on American soil – but his crypt is well-tended in Washington, D.C.

Perhaps the most unexpected inheritance of all—and the one that had the most spectacular consequences—didn’t go to an individual. It went to a nation: the United States.

James Smithson was born in Paris about 1765, where he was given the name Jacques-Louis Macie. The exact date and place of his birth are unknown, as he was illegitimate. His father, Hugh Smithson, was married and the Duke of Northumberland. His mother was the widow of James Macie, a wealthy citizen of Bath, England.

The boy soon moved to England, where his name was anglicized to James Louis Macie and he was naturalized. He attended Pembroke College, Cambridge, earning a master of arts degree, and began to study chemistry and mineralogy. He inherited half his mother’s considerable estate on her death, and after the death of his biological father, he changed his name to Smithson.

Smithson was a talented amateur scientist, in an age when many top scientists were amateurs. He worked and socialized with such great experimenters as Joseph Priestly, Sir Joseph Banks, and Antoine Lavoisier. His work ranged from studying the mineral calamine, which was renamed smithsonite in his honor, to determining the chemistry of human tears. In 1787, when only 22, he was made a fellow of the Royal Society, the most prestigious scientific organization in the world, then and now.

Smithson never married and in his will he left his fortune to his nephew, but specified that if his nephew had no children, then the money would go “to the United States of America to found in Washington, under the name of the Smithsonian Institution, an establishment for the increase and diffusion of knowledge among men.” Although Smithson had traveled widely in Europe (he died and was buried in Genoa) he had never visited the United States, and left no explanation why he chose it to receive his fortune. But on the nephew’s death in 1835, the U.S. Chargé d’Affaires in London informed our Secretary of State of the inheritance.

There was initially hesitation among Members of Congress about accepting money, and instructions, from a British aristocrat only a couple decades after his countrymen burned Washington. But seven years after Smithson’s death President Andrew Jackson finally dispatched Richard Rush, son and grandson of signers of the Declaration of Independence, to collect the windfall. Rush returned in 1838 with 11 chests containing 104,960 British gold sovereigns, each denominated as one pound sterling. In today’s money that was about $11 million. But the sovereigns were nearly pure gold and weighed close to a ton, representing about $32 million of current metal value.

The U.S. Treasury, for obscure reasons, invested the Smithson largesse in state bonds issued by Arkansas, Illinois, and Michigan. Then Congress began to argue and dither, for years, over exactly what Smithson meant by “the increase and diffusion of knowledge among men.” Meanwhile the states defaulted on their debts, and the bonds lost most of their value.

Former President John Quincy Adams, then sitting in the House of Representatives as a congressman from Massachusetts, and Senator Benjamin Tappan, from Ohio, finally convinced Congress to make up the lost money, with interest, and use it to fund an institution of science and learning as Smithson had intended. President James Polk signed the bill into law in 1846, establishing the Smithsonian Institution as a kind of private-public hybrid organization, administered by a board of regents and headed by a secretary.

The first permanent secretary of the Smithsonian was Joseph Henry, one of the early giants of American science. Henry had been born in Albany, New York, grew up poor, but showed an extraordinary aptitude for understanding the natural world. He made important contributions to the aborning science of electricity, including being the first to build a device to convert electrical energy into motion, the ancestor of today’s DC motor. He greatly improved the electromagnet, and his electromagnetic relay made the telegraph possible. He also contributed to solar astronomy and was the first to determine that sunspots are cooler than the rest of the sun’s surface.

Appointed a professor at the Albany Academy in 1826, he moved to the College of New Jersey (now Princeton University) in 1832, where he oversaw the fields of chemistry, physics, geology, and biology. Taking the reins at the new Smithsonian Institution, he got the organization off to a strong start, then stayed there for the rest of his career. He oversaw construction of the institution’s first building, the famous “castle” on the National Mall in Washington. He edited the group’s first publications. And he worked to make the Smithsonian a major center for scientific research.

In addition to conducting research, the Smithsonian was right from its founding an important repository of artifacts. The United States Exploring Expedition that circumnavigated the globe between 1838 and 1842 returned with a huge number of animal skins, plant specimens, shells, and other curiosities from across the seven seas. These became the core of the collection at the opening of the Smithsonian, which quickly developed into what is now affectionately called “the nation’s attic.” There are an astonishing 156 million items in the institution’s current collections—everything from the Enola Gay airplane that dropped the first atomic bomb, to Hawaiian feather capes, to the inaugural gowns of First Ladies, to the original teddy bear named for Theodore Roosevelt.

The Smithsonian was confined to the castle until its first expansion in 1881. Today it encompasses no fewer than 19 different museums, nine research institutions, and the National Zoo. While these are mostly concentrated in the District of Columbia, there are Smithsonian facilities in seven states as well as the Republic of Panama. It has an annual budget of $1.2 billion.

James Smithson not only gave the money to establish his namesake institution, but also his scientific collections, papers, and library. While the papers and mineral specimens were destroyed in an 1865 fire, his 213 books are still at the core of the Smithsonian’s two-million-volume library.

In 1905 the grave of James Smithson in Genoa had to be relocated because of construction, and Alexander Graham Bell suggested that his remains be moved to his namesake institution. Bell and his wife traveled to Genoa to oversee the transfer. Gutzon Borglum, the sculptor of Mount Rushmore, designed a memorial in the Castle to hold Smithson’s remains. He rests there to this day.

It is easy to imagine that Smithson would be pleased to see how his legacy has grown. He sparked the largest museum complex and scientific research center on Earth. All in a country he never knew—but seems to have guessed would grow into the most formidable example of its kind.