Opening Up the University

A century from now, observers may well identify the last months of 2011 as the start of higher education’s Great Disruption. In September, two Stanford computer science professors taught 160,000 students in a “massively open online course” on artificial intelligence. Those who took the final exam received a formal certificate of completion with a grade, class rank, and the professor’s signature. Some 23,000 certificates were issued.

In December, the Massachusetts Institute of Technology upped the ante. After years of providing free courses to millions of learners worldwide, MIT announced a new program named MITx, which will provide instruction, assessments, and credentials to students across the globe. Students can pay a nominal fee to take exams and receive MITx credits for their work. As with the Stanford course, these credentials will not be awarded by MIT itself. But the MIT brand is undeniably attractive, and certificates from MITx will almost certainly carry significant weight with other colleges and employers. Experiments like these carry enormous implications for the future of higher education. 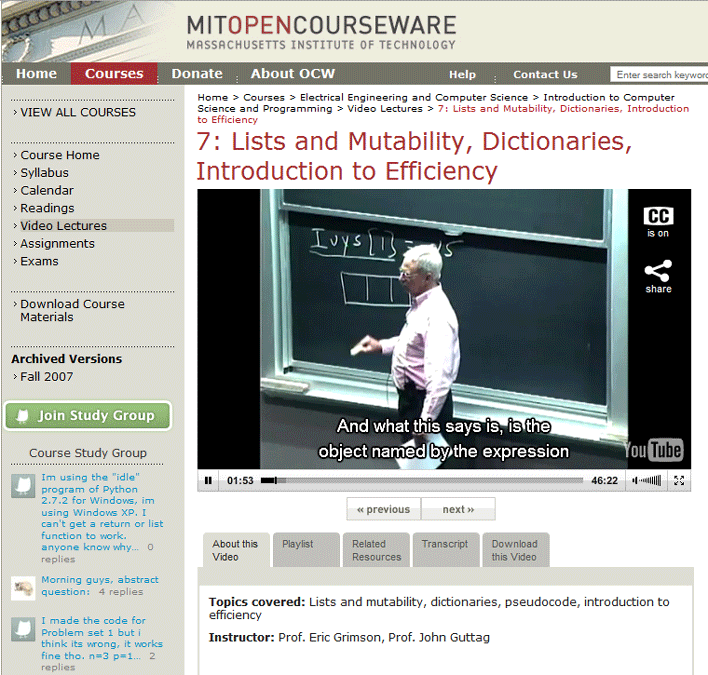 Both of these initiatives trace their roots to the early 2000s, when the William and Flora Hewlett Foundation, the Andrew W. Mellon Foundation, and MIT launched an ambitious joint effort. It was in many ways a fitting partnership: Bill Hewlett was a co-founder of Hewlett-Packard, one of Silicon Valley’s most storied successes, while MIT is the world’s leading research university. MIT wanted to make its educational content openly available for all to use; the Hewlett Foundation prides itself on making grants that build up entirely new fields.

From that match, the OpenCourseWare (OCW) movement was born. OCW is essentially the widespread, web-based publication of educational materials. At MIT, OCW was designed to provide open access to the core academic content—syllabi, reading lists, lecture notes, problem sets (and solutions), a selection of video lectures, and exams—for all of the courses offered at the school. OCW users receive no credit and have no access to MIT faculty. What they get, however, is the entire MIT curriculum, at their fingertips.

Ten years on, it is clear that Hewlett’s investments did far more than simply put educational content online. It up-ended conventional notions of higher education and intellectual property. It helped build a movement toward openness in a system that has typically prided itself on being closed.

From Closed to Open

For centuries, colleges and universities have been built around the notion of scarcity. The knowledge that universities pass on, signified by the diploma students earn at graduation, is typically cast as a precious commodity available only to those who gain admission, pay tuition, and complete the course of study. In fact, the scarcer the opportunity to learn (i.e., low acceptance rates), the higher is the institution’s prestige.

This sense of scarcity once made sense: hard-copy books had to be stored in a central location, and faculty had to teach students face to face. But as technology has changed, these constraints have become increasingly obsolete. Forward-thinking educators across the country now talk in terms of abundance and scale. Hewlett and MIT were among the first organizations to recognize the potential of the Internet to “open up” educational content to the masses.

The two organizations came together in the winter of 2001. William Bowen approached Paul Brest, president of the Hewlett Foundation. Bowen was the head of the Mellon Foundation; he had recently met with Charles Vest, president of MIT. Bowen described an offer Vest made: for $100 million, he would be able to put all of MIT’s courses online. They would be available for everybody.

At Hewlett, the goal of democratizing access to university content resonated immediately. “The Hewlett Foundation has a deep-seated commitment to equality of opportunity,” explains Marshall (“Mike”) Smith, a program director at Hewlett. “You can’t ask for anything better at equalizing opportunity than MIT’s OCW. Suddenly, instead of keeping knowledge behind locked doors at MIT, it would be available to the world.”

The board at the Hewlett Foundation also instinctively grasped the idea’s import. When Smith presented the grant proposal to the board, Walter Hewlett—a son of Bill and the chairman of the foundation—stopped him three minutes in. Hewlett himself had a background in the open-source preservation of music. Everyone understood that the MIT project was an excellent fit. The initial grant was quickly approved.

The original OCW project started with matched grants of $5.5 million, one from Hewlett and the other from the Mellon Foundation, and a pilot program to put 50 courses online in 2002. By the official launch in 2003, they had 500 courses. As of 2007, MIT had completed the publication of the entire curriculum: 1,800 courses in 33 academic disciplines. Though exact usage numbers are difficult to come by, MIT estimates that more than 100 million unique visitors have used OpenCourseWare.

The initiative also spread beyond MIT, as other elite universities approached Hewlett for funding. Schools like Johns Hopkins, Yale, Rice, and Carnegie Mellon all got involved, and Hewlett actively used its funding to provide incentives for universities to embrace openness. OCW also moved overseas, first via Hewlett’s involvement in China. Courses have been translated into Chinese, Thai, Spanish, Portuguese, and Persian.

The program officers at Hewlett argue that the key to OpenCourseWare’s success was not the quality or accessibility of the content itself, but the foundation’s focus on “building a field.” According to Barbara Chow, director of Hewlett’s education program, OCW was really an attempt “to engage in a new field for which there was no precedent.”

A case in point: Hewlett’s support for efforts to rethink licensing for intellectual property. In the early years, the idea of OCW chafed against intellectual property law. Since 1989, the law has held that creative work is automatically copyrighted. In practice, that means any attempt to download, print, or modify content from the Internet runs afoul of the law unless the user has special permissions.

This status quo was antithetical to Hewlett’s vision of openness, which wants users to have free access to open resources, the right to copy and redistribute that content, and the freedom to adapt it to suit their needs. If, for instance, a high school teacher wanted to use an MIT syllabus to design an AP physics course, Hewlett wanted to make sure she would not be charged with copyright violation for using OCW. Promoting openness required a new, more flexible approach to licensing where creators could maintain their ownership of copyrights, but also have the option to grant special, blanket privileges to users.

Enter Hewlett’s investment in Creative Commons, a nonprofit that specializes in creating the kind of intellectual property licenses that facilitate open courseware. When OCW was first coming together, Creative Commons was run out of Lawrence Lessig’s office at Stanford Law School. (In fact, on the very day Smith and Cathy Casserly, the Hewlett program officer for the OCW grant, came to discuss Creative Commons, Lessig learned that he and his plaintiffs had lost a Supreme Court decision to overturn a 1998 copyright extension law.) With help from Hewlett, Lessig built Creative Commons into a major repository for open resources and the main provider of flexible copyright licenses that make OpenCourseWare possible. 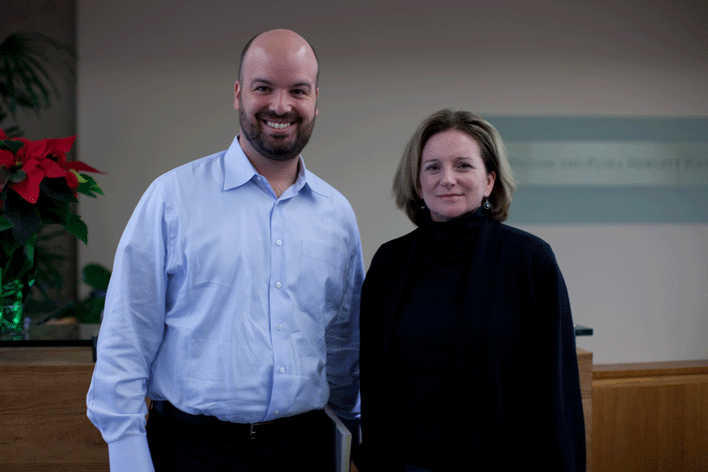 Vic Vuchic and Cathy Casserly (Photo by Joi Ito; used under a Creative Commons BY 2.0 license)

By 2008, the OCW ranks had grown so large that Hewlett helped to launch the OpenCourseWare Consortium, a coordinating body for more than 250 universities involved. Collectively, the group has made public more than 13,000 courses in 20 languages.

The Price of Free

Creating OpenCourseWare was costly work, and its founders are now thinking about how to make the open resources movement financially sustainable over the long haul. Mike Smith estimates that Hewlett spent about $145 million over the last 11 years, with the highest annual total clocking in at $21 million. (The foundation made individual grants as small as $25,000.) MIT reports that open course development costs between $10,000 and $15,000 for each course.

According to Vic Vuchic, Hewlett’s new program officer for open educational resources, the foundation is now redefining its role in the movement. “We feel like there’s a lot of momentum,” he explains. The next stage will involve “making this sustainable, making it an adaptive ecosystem, so that it can continue indefinitely.”

Vuchic sees two keys to building sustainability: bringing openness into the mainstream and diversifying funding streams. Vuchic hopes to see “open” become the default option in the private sector. “When you build a building,” he observes, “you do a green audit. Johnson & Johnson has a green product line. Green is just part of what firms do.” Vuchic believes openness can follow a similar path: “We know we’ve made huge progress when people stop asking ‘Why should we do open?’ and ask ‘Why aren’t we open?’”

Even if openness becomes culturally sustainable, fundamental questions remain about the movement’s financial sustainability. After all, there is not much money in giving things away for free. Hewlett has been encouraged by the movement’s ability to attract a wide range of funders, including the Gates and MacArthur foundations, as well as federal and state governments. Even as Hewlett’s funding in the field has decreased over the past three years, funding for open educational resources overall has grown.

In the end, though, it may be trends in higher education that sustain the movement. Public pressure to reduce the cost of postsecondary education is fueling interest in open resources. Mainstream universities may begin to use open courses within their own walls to contain instructional costs, thus expanding the number of people with an interest in sustaining the movement. And new educational providers built on open content are likely to emerge as low-cost alternatives.

But it is the elite universities, for whom scarcity has typically equaled prestige, who will be crucial to sustaining open educational resources. Some institutions have come to consider open courses as an integral part of their brand. MIT now funds about 40 percent of the OpenCourseWare work directly, and MITx will likely expand that footprint. In a system where “open” and “elite” are rarely used in the same sentence, Hewlett’s efforts have made considerable headway in uniting the two.

Andrew Kelly is a research fellow in education policy studies at the American Enterprise Institute.