Winter 2014 – The Tough Road to Excellence

What educators abroad have to teach American reformers

The media offers constant reminders that American students lag behind their counterparts in many countries in math and reading skills, typically earning middling scores when measured against the rest of the developed world. Although these reports lead many to believe that American students are growing less capable with each passing generation, this is not the case. U.S. achievement has remained steady, but marked improvement overseas has caused Americans to fall behind the pace of international competition. With this in mind, reporter Amanda Ripley argues that the debate on education policy should transcend national boundaries, and that we may want to look to education innovators abroad for ideas and inspiration. Not content to dole out mere facts and figures, Ripley gives readers a firsthand glimpse into three top education systems, following American exchange students in Finland, South Korea, and Poland. With her combination of shrewd research and rich personal narrative, Ripley offers a book that is both informative and engaging. Those with an appetite for education reform will find The Smartest Kids in the World an essential addition to their collection. 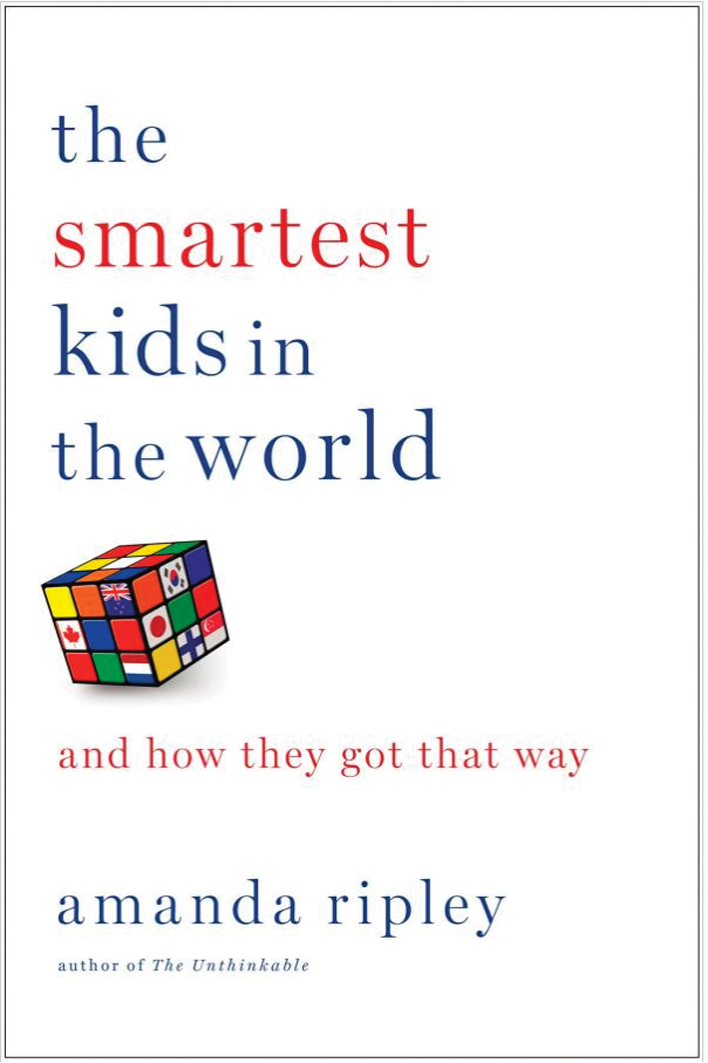 Ripley begins by introducing Andreas Schleicher, the eccentric Franco-German mastermind behind the Program for International Student Assessment, or PISA. The test, which began in 2000 and has since become the gold standard for worldwide evaluation of students, measures the math, science, and reading competency of 15-year-olds in dozens of participating nations. In 2012, when teens from 65 nations were tested, the United States ranked 26th, 17th, and 21st in math, reading, and science, respectively, falling behind countries like Singapore, Switzerland, and even Vietnam. Ripley acknowledges that no standardized test is a perfect barometer of student performance, but she persuasively demonstrates the PISA exam’s effectiveness as an indicator of critical-thinking ability. The book includes several sample questions from the test, and there is little doubt that the exam’s hand-graded questions can provide more insight than a multiple-choice answer sheet run through a machine. Philanthropists have taken notice: The Kern Family Foundation recently launched a “PISA Benchmarking Plan,” in which individual schools can administer the exam and compare their achievement against international counterparts.

Lacking any trace of partisan slant, Ripley comes across as a writer who is genuinely curious to unearth the secrets to educational success. Even when she touches on the contentious debate surrounding education reform, her own political views are largely undetectable, and she allows readers to draw their own conclusions based on the evidence. The discoveries she makes when analyzing data and speaking with various students, teachers, and administrators cause her to take aim at talking points from many camps with equal vigor: Smaller class sizes do not get results, she observes, and spending increases, centralized curricula, and affirmative-action policies are just as fruitless.

What really makes this book stand out is not just its wealth of data or its evenhandedness, but its captivating stories of the three exchange students and its ability to transport readers to distant nations and foreign school buildings. Ripley creates unforgettable characters out of her real-life subjects. One cannot help but become attached to Kim, an underprivileged Oklahoman who bankrolls her $10,000 year in Finland entirely on her own, hosting bake sales and selling beef jerky door-to-door, or Tom, an outsider who travels to Poland in hopes of finding a place where he truly belongs. Ripley’s interviews with key players in their respective countries’ education reform movements also produce pearls of wisdom. Ripley concedes that her anecdotal evidence cannot replace the studies and surveys that she cites, but she is an engrossing writer whose style complements the substance of her work.

While the thriving education systems of Finland, South Korea, and Poland offer no panaceas for reform, they offer Americans plenty of time-tested ideas. One word pops up repeatedly in Ripley’s analysis: rigor. Her central claim is that high-school academics in the U.S. are simply not as demanding as they need to be. Finnish and Korean teens perform several grade levels above their U.S. counterparts even when variables like economic status, racial background, and government spending are accounted for. The culture of rigor in Finland and Korea extends beyond students, and can also be seen in the teaching profession. Finnish teachers in particular must endure demanding graduate programs, and it is not uncommon for these educators to fail their licensing exams multiple times before succeeding. Finnish teachers attain the same prestige as America’s doctors and lawyers, and are paid comparably. Ripley makes a strong case that this treatment of teachers is a key to Finland’s educational excellence.

Implementing more robust coursework and raising standards for instructors, Ripley posits, is not enough. American cultural attitudes must become more accepting of, and insistent upon, high standards in education. Some suggestions: elevating the prestige of good teachers, eliminating the “self-esteem culture” that has led to more lenient grading and easier work, and requiring passage of a standardized competency exam as a condition of graduation. Ripley understands that there is more than one path to excellence and she mulls several methods of increasing rigor that will give reform-minded donors plenty of options to consider.

Though rigor is at the forefront of Ripley’s call for reform, she is not immoderate. Her profile of South Korea portrays a distressed nation, in which high PISA scores belie a warped education system. She describes South Korea’s “pressure cooker” or “hamster wheel” environment. After school is dismissed, most students transition to private tutors until ten at night, at which point the police enforce a study curfew. Exhausted students often resort to sleeping in class, and an overwhelmed teen who murdered his demanding mother is regarded as a national hero. The lesson? Like everything, rigor has its limits. Parents and teachers must reach a balance between rigor and support, “coaching” and “cheerleading.”

America has too many warm cheerleaders and not enough tough coaches, says Ripley. The cheerleaders are too afraid to see children fail, so they foster a culture in which success is attainable through minimal effort. But by attempting to protect children from failure, America’s education system is only postponing that failure to a later stage. It may come in college, or on the first day of work. Ripley hopes to see a day when American students are conditioned to accept failure, learn from it, and ultimately conquer it. This begins on the individual, family, and community levels. It can be boosted through philanthropic supports.

Intellectually challenging and emotionally involving, The Smartest Kids in the World strikes its own nice balance between rigor and warmth.

Dustin Petzold, a writer in Washington, D.C., is a former intern at Philanthropy.