With Friends Like These, the Poor Don’t Need Enemies

A foolish critic of private charity

Late in the summer, I was in California for an informal meeting with a household name in the technology business, one of the wealthiest men walking God’s green Earth. As is the case with many serious businessmen, his home is remarkably modest, the sort of place in which a Kansas City or Dallas dentist or college dean might serve sensibly priced wine to nice dinner-party guests. There was no exotic car in the driveway, no oversized Jackson Pollack in the living room. That’s the Silicon Valley way: Billionaires don’t have to prove that they can buy things.

Just down the road, one of his peers, Google engineering boss Benjamin Sloss, was collecting his new, highly customized Rolls Royce Dawn Black Badge in an outdoor ceremony at Pebble Beach. A hideous, Tonka-truck yellow thing, this Rolls is a defacement of one of today’s most beautiful automobiles. Sloss has a sense of humor about his conspicuous consumption: His Google profile photo has him posed as Thurston Howell III, wearing an ascot in front of the beached S.S. Minnow. But he does like having his cars delivered very publicly: he previously took possession of a Ferrari 599XX Evo, also yellow, in a ceremony at Monza during the Italian Grand Prix. That car was sold in an auction raising money for Italian earthquake victims, with Sloss’s winning bid accounting for $1.8 million of the $2.3 million collected. 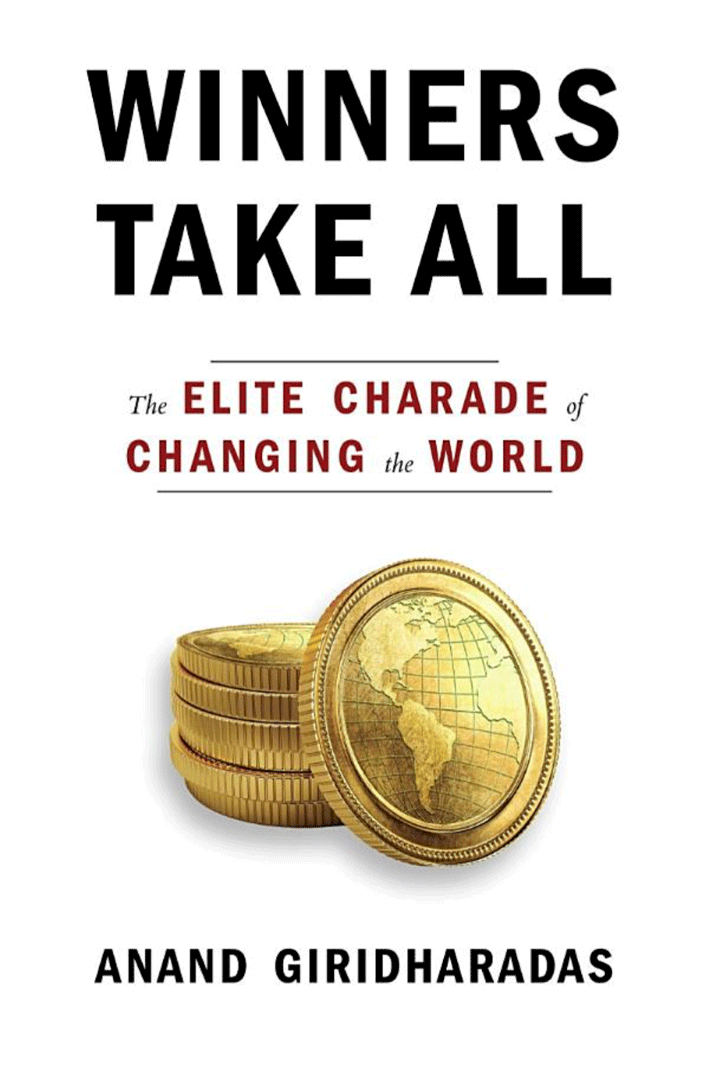 Winners Take All: The Elite Charade of Changing the World by Anand Giridharadas

Silicon Valley has a peculiar set of informal sumptuary laws. There is a general prohibition against certain kinds of conspicuous consumption. So Mark Zuckerberg doesn’t wear silk suits. He has a closet full of plain grey T-shirts sold by Brunello Cucinelli at a price of about $4oo each. Among the young money in Silicon Valley, there is a terrible fear of appearing gauche. Nouveau riche nerds are sneered at for having a “red-car year,” that first flush of fresh wealth that sometimes is accompanied by the purchase of a Ferrari or Lamborghini. They are expected to settle quickly into the Bay Area-approved respectability of a gray Audi and suitable philanthropy.

Now along comes Anand Giridharadas to sneer at the philanthropy too. In his new book Winners Take All: The Elite Charade of Changing the World he argues that the high-profile, fashionable philanthropy of the Silicon Valley set, Davos, Aspen, the Clinton Global Initiative, etc., is a vast exercise in self-service and auto-aggrandizement. He suggests that members of a powerful elite who want to protect a regimen of capitalist material advance and neoliberal culture use philanthropy as a prophylactic against the more radical and statist economic interventions the author would like to see. “Much of the charity and social innovation and give-one-get-one marketing around us may not be reform measures so much as forms of conservative self-defense,” he writes.

I do not wish to be unkind, but the plain fact is that Giridharadas has written a very foolish book. It is foolish word-by-word. And it is foolish at length. A better editor might have fixed some of the little things, like Giridharadas’s mockery of Silicon Valley millionaires for cowering in “landed estates.” That phrase does not mean what he seems to think it does; a landed estate is a revenue-generating property, not a hideaway for gentry as he uses it. That same editor might read the author’s complaint about the “limited progressivity” of our tax code and ask what “unlimited progressivity” might look like. When you encounter phrases like “actively volunteered” you wonder how one might inactively volunteer. The term “trickle-down economics” is not actually a substantive economic description as used here, but a pejorative invented by certain political critics. And I doubt that the “Summit at Sea” where a bunch of global do-gooders met aboard a cruise ship was in fact a “bacchanal” (a ritual drunken orgy) as Giridharadas describes it.

These are not merely literary barbarisms—they point to sloppy and superficial thinking, which saturates this book. “What if,” the author poses from on high, “the elite simply need to part with more of their money in order for every American to have, say, a semi-decent public school?” Well, what if Giridharadas looked at, say, per-student spending data from American public schools and contemplated the fact that many high-spending schools (Newark at $23,946 per pupil per year) perform abysmally, while many lower-spending schools perform well? Inflation-adjusted spending per student in U.S. schools has more than doubled since the 197os, and the number of teachers per pupil has never been higher, with almost no effect on educational outcomes. That Giridharadas is unable to spot, much less navigate, serious questions like that is an indicator of his simplistic reasoning and tendentious argument. This book is not rigorously thought out or intellectually honest.

Giridharadas is correct that much of contemporary philanthropy provides alternatives to more radical programs of redistribution and social management. What he does not seem to understand is that the welfare state itself is the original alternative to radicalism—Bismarck’s way of undercutting the bomb-throwing aspirations of the socialists of his time. Nor does the author meaningfully engage with the reality that much of the new thinking on market-oriented social work (for instance the reforms promoted by Whole Foods founder John Mackey) aims to address the failings of the welfare-state model of thinking about social problems.

Poverty was not abolished, or, as a purely statistical matter, even meaningfully reduced by the Great Society. Instead, the massive expansion of government nannying and wealth redistribution was correlated with family meltdown, crime surges, addiction spikes, and employment declines among the poorer classes who were promised to be the golden beneficiaries. Market-oriented philanthropy did not come out of nowhere.

As disappointing as the welfare state has been, America’s private economy has triumphed in many ways over the same time period. Which is why standards of living have risen across the board. Fastest for the “winners” in education and technological mastery, but for everybody else, too.

And what might be the alternative to what the author derides as “MarketWorld”? His answer is pretty fuzzy, with some epic begging of the question: “When a society helps people through its shared democratic institutions, it does so on behalf of all, and in a context of equality.” That simply is not true. Politicians and bureaucracies have interests of their own. Political incentives exist. A deep body of economic literature (“public choice”) is dedicated to understanding why these well-intended initiatives go so wrong so often.

A bit of global context for this foolish book: From 199o to 2o13, the number of people enduring severe poverty around the world was cut by 7o percent. In India alone, 137 million people were lifted out of want during the tenure of privatizer and market reformist Manmohan Singh. A collection of Rotarians managed to all but eradicate the dread affliction of polio. The number of people who die in wars on this planet has been declining since the 194os, and in 2o16 the number of people killed by war worldwide was approximately half the population killed by cancer in France alone. Bill Gates by himself has so far put up $28 billion for causes ranging from agricultural development to malaria eradication. And a few rich Ferrari enthusiasts put a couple million dollars into the service of Italian earthquake victims.

On matters large and small, MarketWorld has done some pretty amazing things. The other model, the one that produced American public schools and Medicaid? Less impressive.

Those businessmen and philanthropists who do the Aspen-Davos circuit—the Benjamin Slosses of Silicon Valley and elsewhere—can they sometimes be self-interested and obnoxious? Yes. Politicians and bureaucrats aren’t?

And then there is the 8oo-pound gorilla that exists entirely outside of Giridharadas’s vision: National data show clearly that moguls put up only a small portion of America’s total philanthropic giving. Churchfolk and small donors in states like Utah, Texas, and Georgia give a lot more money in total. They are the infantry of America’s charitable army, and this author can’t even see them marching.

At its heart, though, Giridharadas’s argument is not about what actually makes humans flourish. His book is devoted to moral posturing. He simply wants to extend, as a matter of cultural attitudes, the sumptuary laws, to make philanthropy one more thing to feel guilty about. Charity that looks like fun brings out the inner puritan.

And there’s something very funny about that: Anand Giridharadas, alumnus of McKinsey, Harvard, MSNBC, Aspen, and the New York Times, finding fault with the American elite. That’s a recursive loop of liberal self-flagellation. It could be great satire—man appoints himself, without invitation, tribune of history’s most prosperous plebs, and decides that their problem is the people who are trying to help them. Good for a laugh, unless you’re one of the people who needs precisely the kind of help sneered at in this book.

Kevin D. Williamson is the author of The End Is Near and It’s Going To Be Awesome, The Politically Incorrect Guide to Socialism, and, most recently, The Case Against Trump.