The growth of DAF accounts, however, has not come without controversy. In contrast to philanthropic foundations, rules governing DAFs do not require a minimum disbursement of funds. This has sparked calls for such “payout” rules, especially because a small number of DAFs have been established by the prominent wealthy, including Facebook founder Mark Zuckerberg, whose DAF is managed through the Silicon Valley Community Foundation.

As a practical matter, even by the most conservative measure, donor advisers transfer funds at a rate higher than the 5 percent required of philanthropic foundations, with payout flow ranging from 14 to 23 percent, depending on methodology (although scholars have sparred on this count).11/

One methodological complication involves how to treat new account contributions, which may occur at the end of a calendar year. If such contributions—made at the tax year deadline—are included when gauging the extent of contributions disbursed as grants, that rate may be understated because so little time remains in the year.

This discussion, however, fails to note another significant aspect of assets housed in DAFs: capital that has not been directed as grants that appreciates in value. Because donor advisers themselves can neither recapture funds they have designated for their charitable account nor realize any personal financial gain from them, the growth in their undisbursed balance leads to an increase in funds that can, by law, be used for only charitable purposes. It is true, as critics emphasize, that there is no set period in which these funds must be disbursed. But it is also true that they are reserved for future charitable use only.

This report uses data provided by the four largest sponsors of DAFs—Fidelity Charitable, Vanguard Charitable, Schwab Charitable, and the National Philanthropic Trust, which aggregated the data—to gauge the extent of that account appreciation. Table 1 aggregates financial data for all DAFs managed by those sponsors, which comprise 46 percent of all DAF accounts. The table isolates asset appreciation—that is, the increase in potential charitable assets that results from the investment of undisbursed funds in bond and equity markets, through vehicles managed by the DAF sponsor. (The assets are estimated based on a $256,000 average for account assets for the four firms analyzed.) 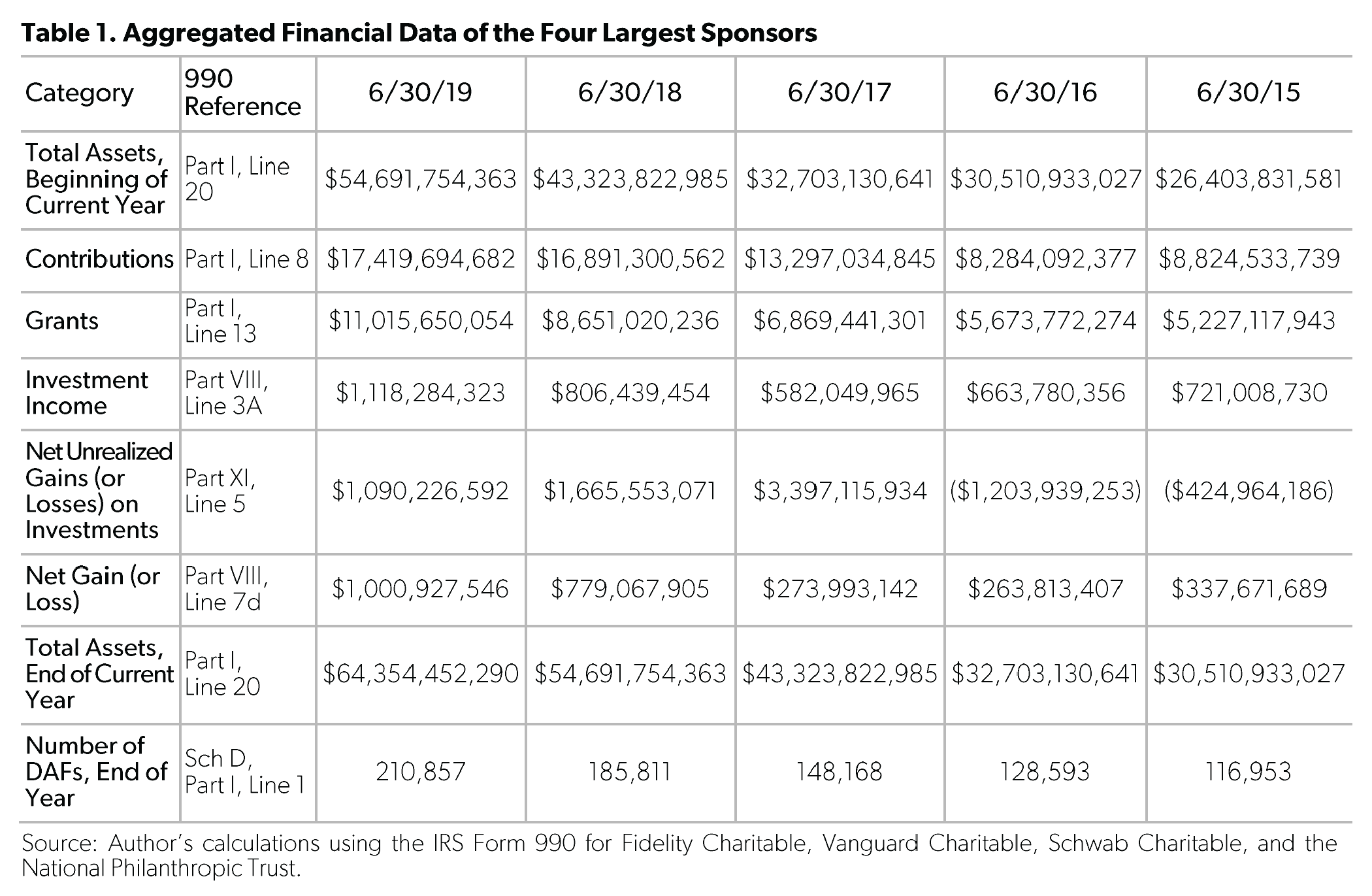 The key in Table 1 is the aggregated net gains, found from IRS Form 990 (required of all nonprofits), Part VIII.12 By adding the individual figures for the years 2015–19, the appreciated value of undisbursed assets in these DAF accounts totaled some $2.66 billion. Because the four organizations examined comprise slightly less than half of all DAF accounts, it is plausible to assume that, from 2015 to 2019, more than $5 billion has, because of DAF asset appreciation, become available for only one purpose: future charitable giving.