Declining Divorce in Jacksonville: Did the Culture of Freedom Initiative Make a Difference?

The distinctive contribution of the Culture of Freedom Initiative (COFI) in Jacksonville seems to have been its combination of microtargeted digital marketing with a broad network of religious congregations committed to strengthening marriage. By combining a digital air campaign with an in-person ground campaign, COFI was able to reach a substantial minority of the approximately 331,000 people who are married in Duval County. The digital messaging COFI sponsored also conveyed the message that marriage matters to a large number of people in Jacksonville.

The leadership and extensiveness of the on-the-ground network may well account for the much more dramatic decline in Jacksonville than in two other counties—Montgomery County, OH (whose county seat is Dayton) and Maricopa County, AZ (Phoenix)—where COFI also tried to strengthen marriage and family life. In these two counties, COFI was not able to build an extensive countywide, on-the-ground network, and, hence, there is no evidence the efforts had an impact on family stability in Montgomery and Maricopa counties.

Declining Divorce in Jacksonville: Did the Culture of Freedom Initiative Make a Difference? 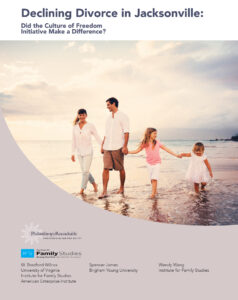