In recent months, there have been policy conversations percolating on Capitol Hill that call into question the expenditures of private family foundations. Specifically, there have been questions about (and subsequent policy proposals to address) a possible abuse in family foundation expenditures as it relates to administrative expenses (i.e., salaries, travel expenses, etc.) that are incurred by employed family members or descendants of the original donor(s). To investigate this, data on private foundation spending was collected and analyzed to assess whether there were significant differences between overhead expenses of family versus non-family foundations.

Classification as a family foundation versus an independent foundation is based on the composition of the board of trustees of each foundation in 2018. The investigation of familial relation between those board members and the original donor(s) is based on publicly available information from the foundation’s website, news articles and public biographies of the individuals. Furthermore, with the intent of capturing the best representation of private, non-operating foundations, all instances involving outlier operating circumstances (i.e., the execution of a “spend down” plan or other situations that may significantly alter typical spending practices) were excluded from the data set.

The family foundation data set further illustrated a downward trend in the distribution of ratios — meaning that more of these foundations had lower expense ratios. The ratios among independent foundations were less evenly distributed and demonstrated no clear trend (see Figures 3 and 4 in the full report).

Ultimately, the data in this study do not suggest widespread misuse of foundation funds by family foundations for administrative expenses. 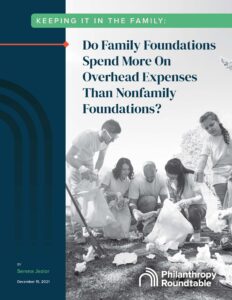