How Public is Private Philanthropy?

Part of the mission of The Philanthropy Roundtable is to make its members aware of the features of the legal and policy climate that may affect donors’ ability to achieve their charitable aims most effectively. In recent years, this climate has included increasing pressures from some public officials and advocacy groups to subject private philanthropies to more uniform standards and stricter government regulation. Such changes could significantly affect the ability of philanthropies to continue to play their role in supporting and nourishing American pluralism.

Traditionally, there has been a limited relationship between philanthropy and government. In recent years, the “public money” claim has been employed to support proposals from government and some in the philanthropic sector to urge stricter legal limits on the purposes, operations, and governance of foundations and other charities. This report provides further legal basis for a continued separation between government and philanthropy.

The Roundtable offered support to two noted legal scholars, Evelyn Brody and John Tyler, to prepare a monograph and a longer law review article evaluating the authorities and precedents applicable to the “public money” claim. This support was provided by the Roundtable without any restrictions on content. The original publication of this monograph was in June 2009, when the authors presented the results of their evaluation. The monograph was well-received and provided a strong foundation for the position and protection of private philanthropy in the public world. Increased calls for classifying private philanthropy as public money and important court cases, including a Supreme Court case, have since bolstered the authors’ original conclusions, necessitating this second edition.

How Public is Private Philanthropy? 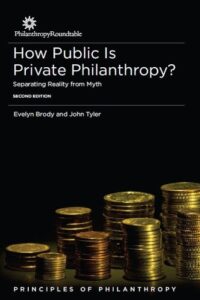