Improving Board Diversity: Lessons from Sweden and Norway

Countries around the world have adopted the goal of creating gender-equal societies. One avenue to achieve this goal, in their view, is through greater female representation on corporate boards. The case for increasing gender diversity on corporate boards is made on economic and ethical grounds. Common opinion asserts that diversity is good for business and delivers good outcomes for women. The purpose of this white paper is to review examples of countries that have imposed both mandatory and voluntary gender quotas and determine the effectiveness of these actions.

The bottom line is that the issue of quota mandates is not settled, nor will cultural pressure to increase “Diversity, Equity and Inclusion” (DEI) through representation on boards and leadership abate. Often, legislation and regulation that affect for-profit entities spread to nonprofit organizations, resulting in a shift from mission and increased costs that can divert resources away from the individuals and causes that they serve. Accordingly, it is still important to test the assumption that diversity makes boards more effective, improves firm performance, and leads to better outcomes for women in society.

With little data from the United States, this white paper examines two other countries that have increased female board representation through mandates or voluntary action: Norway and Sweden. In both cases, empirical research is mixed at best on questions of board effectiveness and firm performance but offer no causal evidence linking the two. Also, data indicate that the only women who have measurably benefitted from greater female representation on boards are the female board members themselves, so-called “golden skirts.” Most women down the professional ladder were no better off. That Sweden has made strides close to those of Norway without a mandate is a compelling argument for why voluntary measures are as effective as government mandates, without the downsides of regulation.

This analysis is not only instructive for the leadership of private firms but for governance structures in the nonprofit sector. Diversity mandates promulgated upon the for-profit sector may eventually be imposed upon the charitable sector, which can raise compliance costs and negatively impact the ability for nonprofits to achieve their missions. Indirectly, organizations lose charitable dollars when firms suffer financially and exit that state or regulated jurisdiction as a result.

Improving Board Diversity: Lessons from Sweden and Norway 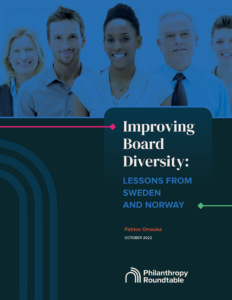