In a February 2021 debate hosted by the American Enterprise Institute (AEI), Howard Husock and Ray Madoff discussed donor-advised funds (DAFs) and what—if any—changes should be made to DAF rules.1

During the discussion, Madoff questioned whether family foundations should be able to count the salaries and travel expenses of family members as administrative expenses that count toward the five percent payout requirement for private foundations, or if this should be reserved for nonfamily staff expenses.

She said, “People are told that they can hire their children to work in the private foundation and they can spend their … time in Bermuda and deduct those expenses for when they have their family meeting. And we think these are really degrading to the sense of what the purpose of the charitable deduction is and that is why the proposals in the Initiative to Accelerate Charitable Giving would not allow those to count for purposes of the five percent.”

While Madoff’s comment is targeted at clear instances of abuse, she offered no specific evidence this is widespread through family foundations. Surely one can hypothesize scenarios of misuse of funds and conflicts of interest for any type of organization. However, her underlying skepticism raises a question—do family foundations have higher expenses relative to grantmaking than nonfamily foundations?

One multi-year prior research project concludes the answer is “no.” In 2008, the Urban Institute, the Foundation Center, and Philanthropic Research, Inc published a study called, “What Drives Foundation Expenses & Compensation: Results of a Three-Year Study.”2 The authors sought to determine what factors drive administrative and operating expenses by analyzing expense and compensation data from the 10,000 largest foundations in terms of giving. 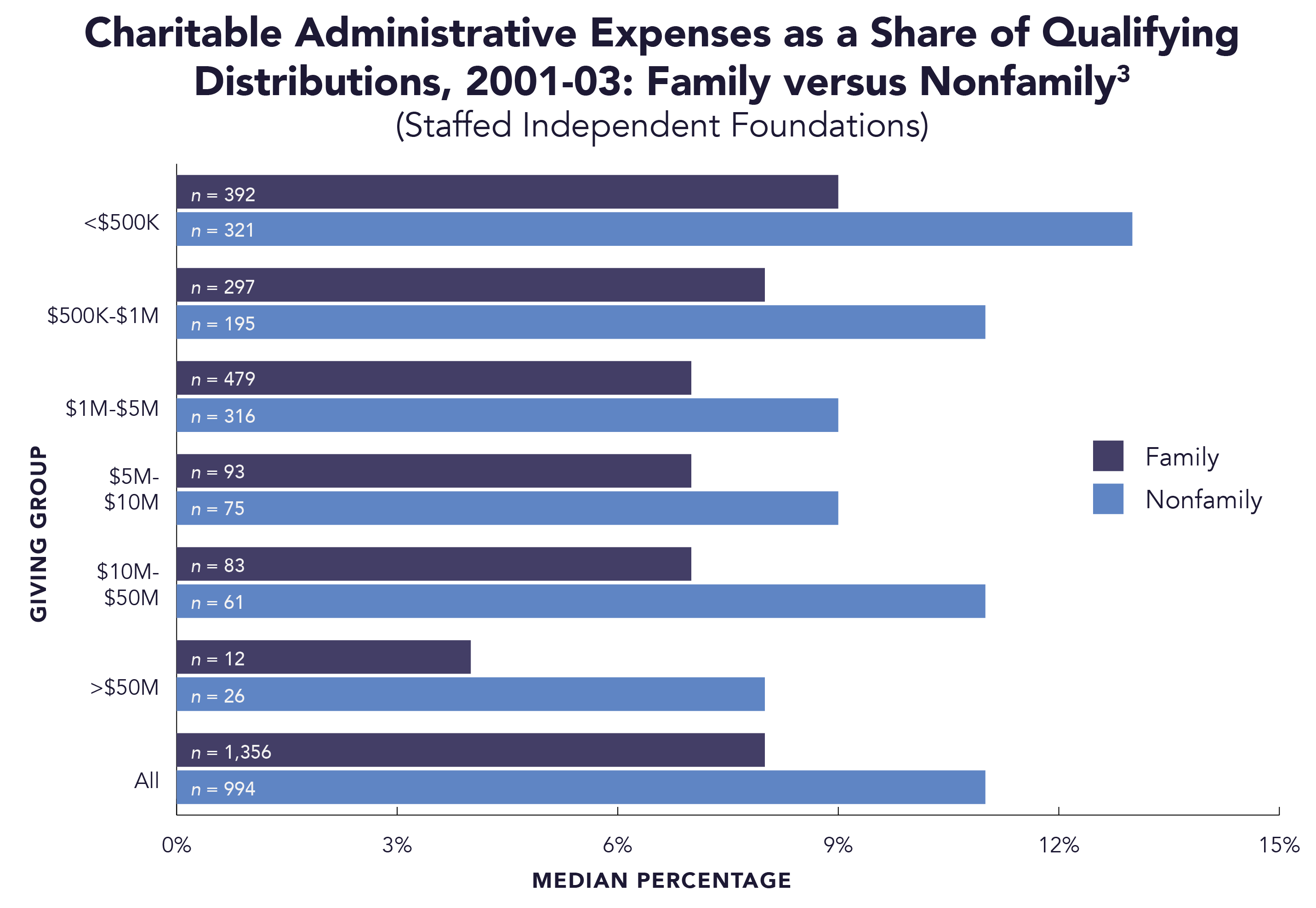 “The lower median expense–to–qualifying distribution ratios for family foundations compared to nonfamily foundations suggests that family members hold staff-related costs down by providing no- or low-cost labor for administering grants and other programs. Some family members also contribute office space and administrative services, such as legal and accounting, thereby lowering expenses.”

But what if something has fundamentally changed since this analysis? We dug into the data for a handful of foundations to see if the association still held. On one side of the scale, we looked at the Form 990-PF data for the foundations publicly backing the Initiative to Accelerate Charitable Giving. Among other provisions, these groups support limits on the ability of family foundations to allocate the costs family members accrue toward payout. 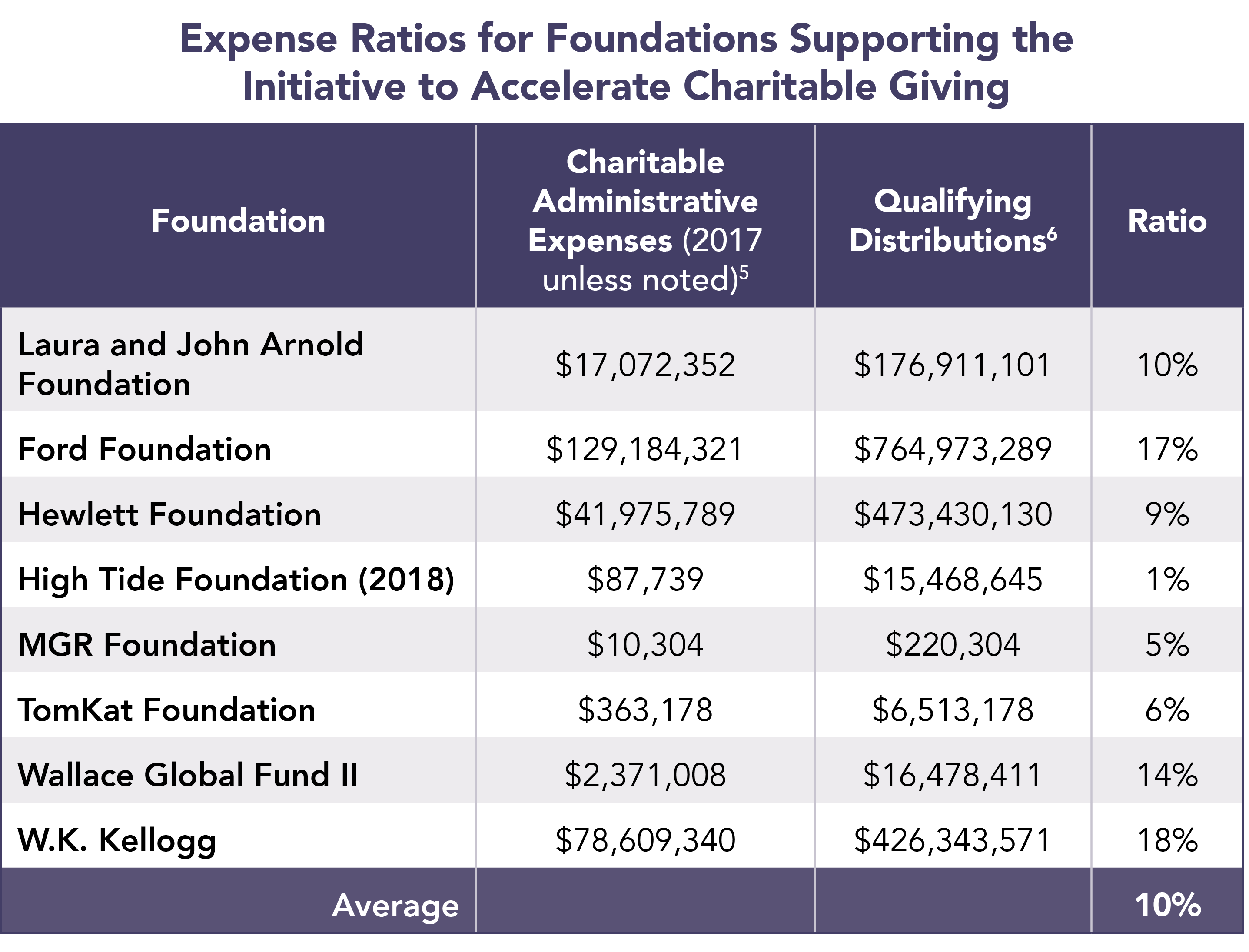 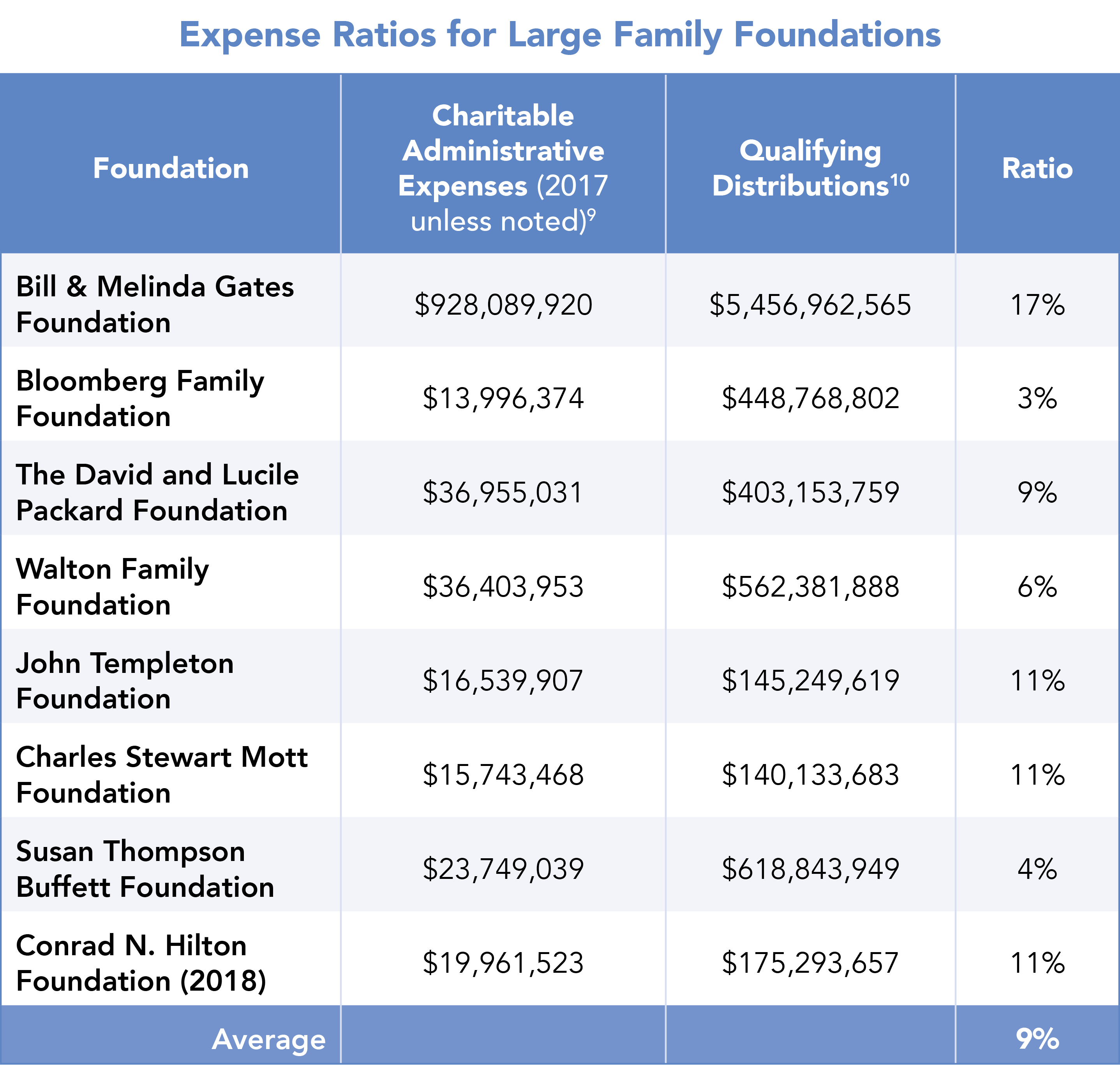 Laura and John Arnold switched over from their foundation to an LLC, Arnold Ventures, in 2019.8 So we used 2017 as a sample year to keep this informal analysis apples-to-apples, as John Arnold is a co-developer and vocal proponent of these reforms. Naturally, their LLC will not face the same transparency or requirements as would a foundation.

On the other side, we looked at the data for eight of the largest family foundations in terms of assets.

7 The list of supporting foundations was last accessed on March 30, 2021 here: https://acceleratecharitablegiving.org/about/