Donor privacy is critical to the protection of philanthropic freedom—the right of Americans to choose how and where to spend their charitable assets in order to fulfill their diverse missions. Unwarranted state incursions into private charitable giving will chill the exercise of First Amendment freedoms, allowing donors to fund controversial philanthropic causes without fear of harassment and reprisal.

Donor privacy also protects those who choose to give anonymously for a variety of good reasons, including deeply held moral or religious beliefs, a sense of humility, a wish to lead a more private life, and the desire to minimize solicitations from other organizations.

States have been the most active front in the battle to protect donor anonymity. So far this year, 15 states have considered legislation that would threaten the privacy of donors to 501(c)3 organizations. On the other side, seven states advanced donor-privacy protections this year, with four of them—Louisiana, Oklahoma, Utah, and West Virginia—enacting them into law. There have been several lawsuits around the country challenging efforts to force donor disclosure. The most important of these cases is Americans for Prosperity Foundation v. Becerra, a case challenging the California attorney general’s demand for that group’s donor list. The U.S. Supreme Court is weighing whether to take the case in its next term. 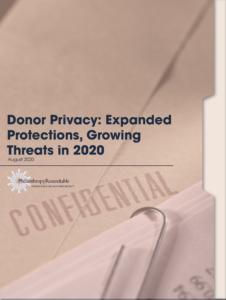