In May 2021, noted donor-advised fund critics Ray Madoff, a Boston College law professor, and James Andreoni, a professor of economics at the University of California San Diego, published a report with the Boston College Law School Forum on Philanthropy and the Public Good called “Impact of the Rise of Commercial Donor-Advised Funds on the Charitable Landscape.” The title connotes a sweeping analysis of the charitable sector and a rigorous discussion of the impact of donor-advised funds (DAFs), but the report leaves the reader with more questions than answers. Most problematic is the methodology, which excludes religious institutions, despite the fact that these are among the leading recipients of charitable gifts.

The report claims the recent growth of giving to DAFs and foundations meant $300 billion less in contributions went to so-called “working charities” between 2014 and 2018.

This policy brief will address three major flaws with the methodology behind this estimate and suggest additional areas for study: 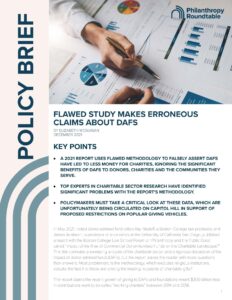