There are many reasons why individuals wish to keep their names out of the spotlight. They might want to minimize risks to personal privacy by having their personal information in the public domain. They might prefer all the attention go to the good work of the charity they support rather than themselves. Especially for high dollar donors who may provide a significant share of a charity’s budget, the goal may be to avoid being seen as taking ownership of a cause or organization.

Or, they may not want to be solicited by a multitude of other groups seeking the same support.

Some people belong to a religious tradition that favors anonymous giving. The Book of Matthew, Chapter 6:1 cautions: “Be careful not to practice your righteousness in front of others to be seen by them. If you do, you will have no reward from your Father in heaven.”

A donor’s reason for wanting privacy may be even simpler. Arthur Brooks, an author and Harvard professor, cites studies that show anonymous giving leads to higher levels of happiness because “publicized gifts, in enhancing the donor’s reputation in the eyes of others, can make a self-reflective donor doubt her own motivations, extinguishing the warm glow.”

Others may have—at least to outsiders—completely bizarre reasons for wanting anonymity. Or they may have no particular reason at all. And it is not for anyone else—much less the government—to demand otherwise.

Anonymous giving goes hand-in-hand with free speech, which has been essential to democratic discourse since the founding of our republic. The ratification of the U.S. Constitution was primarily debated through a series of unsigned papers.

Unfortunately, the current climate of cultural divisiveness has transformed the act of donating into a public and oftentimes politicized spectacle. Too often, average people, business owners, wealthy citizens, private foundations and corporations are publicly attacked because the recipients of their donations might have views or agendas that are considered anathema by others.

Additionally, in recent years, more states have passed laws that require exposing the identities of individuals, businesses, labor unions and nonprofits that spend money to participate in public dialogue. People are required to register with the government and file reports in order to speak their minds. An expanding disclosure regime is taking root. Its proponents claim to be countering political corruption but the regimes inevitably sweep up much charitable activity in the process. Donors to good causes who wish to remain anonymous are forced to disclose their personal information, making it all the less likely they will donate in the first place. These mandates have diluted public dialogue, invited harassment and retaliation against speakers and chilled speech and association. Although the U.S. Constitution protects private associations against compelled disclosure, lower courts have often failed to enforce those protections.

These 50 case studies (one for each state) demonstrate the transcendent importance of the right to privacy, anonymity and civic association—all of which rely on freedom from unwanted and unnecessary disclosure. Some of the stories concern weighty and highly divisive issues of the day: abortion, civil rights, taxation and more. A few involve real dangers to personal privacy or even safety. Some might seem perfectly anodyne, with little apparent harm from disclosure, and the choice for anonymity is simply a personal preference. Yet in our constitutional system, the burden should not fall on the donor to provide a compelling reason for anonymity. The burden falls on the government to justify filing and disclosure requirements for the charitable sector—whether it’s a donation, membership lists or cumbersome paperwork.

Some case studies involve individuals supporting causes or organizations (e.g. Planned Parenthood, ACLU) that may not be well-received in most conservative “red” states; and, conversely, activity (pro-life, pro-traditional marriage) that would attract scorn, harassment and retaliation in more progressive “blue” states. The advent of social media and the practice of
‘doxing’—posting an individual’s address and contact info on the public web to incite harassment—means the distinction is blurred, if not erased, between local, state and national issues and controversies. Supporters of unfavored causes in one part of the country could be targeted by antagonists from another part of the country—either via social media or a crowd at their front doorstep.

The stories in this report illustrate:

Ultimately giving a donation or joining a cause should be viewed for what it is—an act of generosity or expression of personal values and belief. As the following case studies show, protecting these essential freedoms requires constant vigilance and willingness to fight back—whether in the public arena or in court. 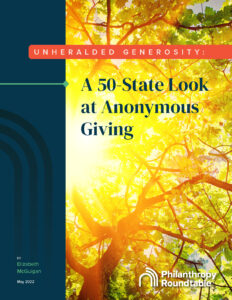