The Philanthropy Roundtable believes the imposition of a wealth tax would have a long-term negative impact on the charitable sector. Shifting more resources from the voluntary sector to government will yield less for not only the major donors charities rely on, but also less for the charities themselves.

America is a vibrant, diverse country with myriad challenges and opportunities. Recent years have brought a renewed focus on income inequality and disparities in opportunities for numerous groups of Americans. Rather than coming together to address the root causes of social ills and working to foster opportunities for all to succeed and prosper, more voices have joined the call to punish the wealthiest Americans through the tax code. The overarching theme of these calls is, “[f] ailing to adequately tax extreme wealth contributes to economic inequality,” and, “the time is long overdue for us to finally address the grotesque level of income and wealth inequality that exists.”

Some within the charitable sector support the concept of wealth taxes. Their argument is that if the government seeks to confiscate more money from wealthy individuals, those individuals will be more motivated to give increased funds away to charities in an effort to avoid the tax. This primer will explore the flaws in this argument and the threats to charitable giving posed by wealth taxes. 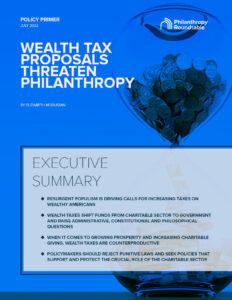