When Philanthropy Comes Under Attack: What the Resurgence of Populism Means for Charitable Organizations

The rise in populism among conservatives is calling into question many of our cultural and social institutions, including philanthropy. Author and Senator-elect J.D. Vance of Ohio argues that “we should eliminate all special privileges that exist for our nonprofit and foundation class.” And he is not alone in this sentiment.

Philanthropy Roundtable believes that vilifying private foundations or other charitable entities is misguided. Using the government to punish America’s charities and those who support them will not help advance conservative principles; rather, it will make us all less well off by shrinking the charitable sector and civil society more broadly.

For the purposes of this brief, we generally think of populism as an anti-institutional sentiment that describes society as controlled by elites who are out of touch with the average American. Many agree that it may be healthy for our democracy to ensure power is not heavily concentrated in a large, centralized government or among few individuals or institutions. However, trouble arises when this recurring sentiment fuels policy proposals that are anti-wealth creation, anti-capitalism, anti-intellectual and anti-entrepreneurship. When populists argue that government policy must be wielded as a weapon to punish the ideas and individuals with whom one disagrees, we all lose.

In recent years, this flavor of populism has gained a foothold within conservative circles. Whereas conservatives typically align on America’s founding principles of liberty, personal responsibility and limited government, there is a growing call to use the power of the government to silence those within philanthropy who do not share our values. In this respect, populism on the right is not a fundamental part of conservatism, rather it is a symptom of social discontent.

It is a real problem that large segments of the population consider themselves marginalized and disenfranchised. Specifically of concern today is the sentiment that philanthropy is ruled by elites who have lost touch with the communities they seek to support. Some people argue that philanthropy is not involved in helping the “little guys.” We hear the term “big philanthropy” slapped on larger entities as a pejorative and a pitch to limit philanthropic freedom.

When Philanthropy Comes Under Attack 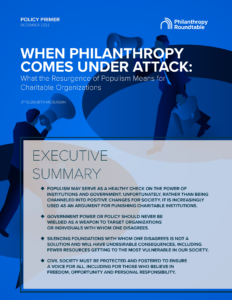