Senators Angus King (I-ME) and Charles Grassley (R-IA) have introduced a bill that would suppress charitable giving. The title of the bill, the Accelerating Charitable Efforts (ACE) Act, S. 1981, suggests the legislation will increase resources for charities. However, the provisions within the bill would do the opposite—harming the exact charitable organizations and communities they seek to help. In the House, a companion bill, H.R. 6595, was introduced by Rep. Chellie Pingree (D-ME) and Rep. Tom Reed (R-NY) in February 2022.

The bill targets private foundations and donor-advised funds, or DAFs. These are charitable giving accounts maintained by individual donor advisors and oftentimes hosted by national sponsoring charities or community foundations. Every dollar that goes into a DAF is immediately and permanently committed to charitable giving. 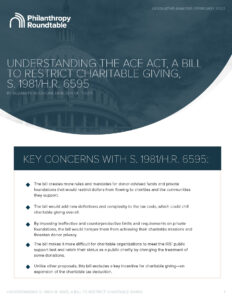