Policy Philanthropy and Its Key Role in Civil Society

The Philanthropy Roundtable supports the First Amendment right of donors to fund the tax-exempt charitable organizations of their choice, whether those entities are primarily focused on humanitarian relief, public policy advocacy, or both. Our organization does not draw a line distinguishing between general charitable giving and gifts to policy-oriented nonprofit organizations. We believe both lines of giving must continue to be protected by force of law because both contribute to bettering society in accordance with IRS stipulations surrounding what constitutes a charitable organization.

All too often in modern discourse, charities are criticized for publicly engaging on a policy issue, what we refer to here as “policy philanthropy.” Rather than painting all policy philanthropy with the “political giving” brush, it is important to understand the difference between political and charitable activities. These differences are rooted in historical precedent and protected by law. The ability for charities to engage in policy debates is at the very core of civil society. Our position is that all gifts to 501(c)(3) organizations are charitable gifts. These may include donations for policy-related activities, but such gifts are not political, and donor privacy regarding such gifts is imperative. While not constituting legal advice, this paper explains the rationale for our position.

Donor privacy is sacrosanct and has been since the founding of our country. Donors should be free to make their gifts as public or as private as they wish. Recent precedent from the U.S. Supreme Court reaffirms that Americans are entitled to give privately to the causes of their choice in accordance with the First Amendment’s protections for speech and association. In recent years, there has been a push by some policymakers and anti-privacy activists to restrict the right of donors who choose to support public policy giving. This push has been fueled by the seemingly blurred lines that privacy opponents claim exist between policy nonprofits and expressly political giving to candidates and political parties. The solution to this alleged problem is not to further restrict philanthropy, but to depoliticize and improve the integrity of the Internal Revenue Service (IRS) and to enforce existing laws and regulatory structures.

Policy Philanthropy and Its Key Role in Civil Society 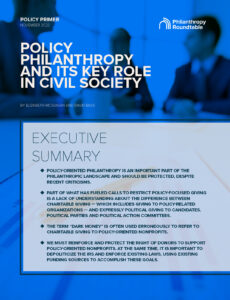